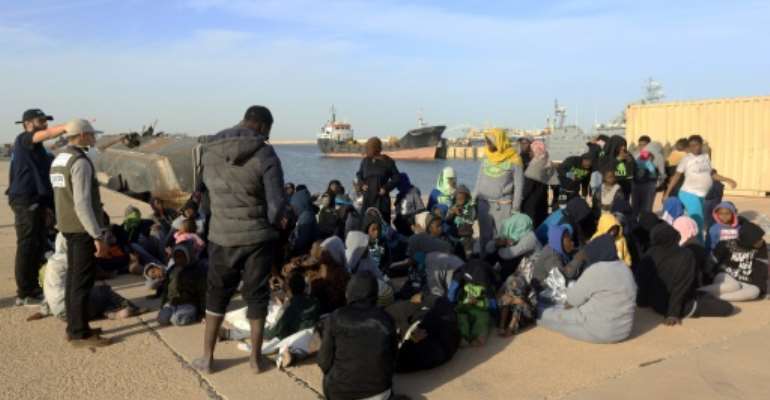 Libya has become a key transit country for African migrants seeking to reach Europe, including this group, rescued from the Mediterranean and taken to a naval base in Tripoli on January 7, 2018. By MAHMUD TURKIA (AFP)

An armed group loyal to Libya's national unity government said Wednesday it had arrested a gang accused of kidnapping and torturing Sudanese migrants near the northern city of Sirte.

The gang, made up of "five Libyans and one Palestinian... had tortured eight migrants," said the Sirte Security and Protection Force, one of several that took part in the unity government's battle to oust the Islamic State group from Sirte last year.

The migrants are being treated at the Ibn Sina Hospital in Sirte, 450 kilometres (280 miles) east of Tripoli, it said.

The arrests took place in Qaddahiya, a village south of Sirte, "after the publication of a video on social media showing scenes of African migrants undergoing unbearable torture", it said.

The video shows the migrants being severely burned by their captors, who demand ransoms from their families.

The eight kidnapped migrants were released, the pro-government force said.

Libya collapsed into violent chaos after the 2011 revolt that toppled and killed longtime dictator Moamer Kadhafi, with a myriad of militias and several jihadist groups battling for influence.

The United Nations-backed Government of National Accord, based in Tripoli, has failed to extend its authority across the country, especially in the east where a rival administration backed by military strongman Khalifa Haftar holds sway.

Libya has long been a transit hub for migrants seeking a better life in Europe, but people smugglers have stepped up their lucrative business in the chaos since the 2011 revolution.

Libyan authorities have come under fire over migrant abuses since the airing late last year by CNN of footage showing a slave market in the North African country.

Last year alone, 3,116 people died attempting the crossing, according to the International Organization for Migration (IOM), including 2,833 from Libya.

But there has been a sharp drop in crossing attempts since the summer of 2017 following efforts by Italy to discourage migrants from trying to make the journey.