Does Ghana Need RTI Bill Now? Or Its Passage Will Be Superfluous Because Of Special Prosecutor Office (SPO)? 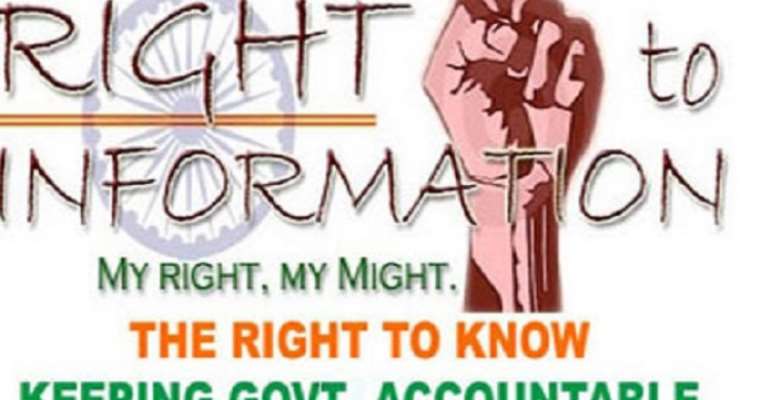 I stated unambiguously that the SPO isn’t a silver bullet entity, therefore Ghanaians must not pin all their hopes in that Office as though its introduction into the system would totally bring corruption to its knees or uproot it. No doubt, the captain of the ship is seasoned. He’s been tested. He’s no nonsense individual and uncompromising. But he would need the support of the critical mass to succeed. Mr. Martin Amidu—the anti-graft crusader alone cannot stop corruption in Ghana.

Does Ghana need the Right to Information Bill?
Without mincing words I say yes, we need it. And I think the Akufo-Addo government must get it passed without any feet-dragging, if it truly wants to fight the evil corruption in our system. Why allow mice to overrun your house if there are many markets in town that sell pest repellent devices or pesticides?

Let me remind readers of something you’ve probably not paid attention to or observed over the years. It’s been nearly a decade since the Public Office Holders (Declaration of Assets and Disqualification) Act was passed. Why was it approved into Law?

The 1998 Constitution ACTA 5550 was basically enacted to check the wanton corruption in the system. Indeed section 1 of the ACT says: A person who holds public office mentioned in section 3 ACT shall submit to the Auditor General a written declaration of the following:

Was it not legal practitioner Ace Ankomah who opened the eyes of the Auditor-General regarding its ability to surcharge? The clause to surcharge had existed, yet the AG failed to exercise it for years until the lawyer went to the Supreme Court to seek clarity on it.

In effect, perhaps, the AG’s Office existed only in name and not in deed ‘Simpa Panin’. And the seepage went on unabated.

We’ve been fighting corruption for decades now, ironically at the end of every four year s and end of their (Public Office Holders) term of office the reports we get suggest that we’ve literally done nothing to deal with the rot

So what is it that’s making our fight so hard or difficult?

I think it’s the lack of transparency. There’s no transparency in this so-called exercise. If there were we wouldn’t be here. How could one person buy 6 V8 cars at a go? Where did this official get the money from? How much is his salary? And where were the Auditor General and the other government or anti-graft agencies? How come we still have corruption with us? Do the citizens of this country know how many assets the people they voted into office possess? What stops them from having access or getting important information?

So lets’ not fool ourselves with the thought that the SP would be able to purge corruption. I believe its work must be complemented by the ordinary Ghanaian. And for this reason I think the RT Bill will provide that vim to deal with corrupt public officials.

Just to give you an idea about what we stand to benefit as a people. When the RT bill is passed it won’t be government alone as usual that would have access to information. Ghanaian citizens will also have knowledge about public officers’ assets. That includes for example the ordinary Ghanaian at Tuobodom or Gyaesayor.

This is why I think we need the RT Bill and I’m hopeful its passage will complement the existing rights enshrined in the Constitution of Ghana and make the work of the Special Prosecutor less cumbersome so to speak.

The RT Bill will also seek to empower the citizens, promote transparency and accountability in the working of the government or the Executive. Plus it will help contain corruption and make our democracy work for the people in real sense. “It goes without saying that an informed citizen is better equipped to keep necessary vigil.”

And did you know one can ask any questions from the government or seek any information. It makes governmental works more transparent. Transparency means clarity of information, which means everything should be open and disclosed to all. We the people that are common citizens put our faith in the system expecting them to work efficiently, fairly and impartially. But that hasn’t been the case as we continue to find ourselves in the cesspool.

Calls for RT Bill in the wake SP
The General Secretary of National Democratic Congress (NDC), Asiedu Nketia has argued that the Office of the SP will ‘struggle’ to carry out its mandate without the RTI Bill. Mr. Nketia says, without the Bill, the SP will find it difficult to retrieve information, especially from government establishments. I tend to agree with him. And I think we’ll probably see that in the first six months or within a year in its operation.

“The most important Bill, even more important than the Special Prosecutor’s Office is the freedom to information Act. If someone comes with a complaint on a bloated price of a project, it will be difficult to crosscheck because if you request for it from government offices, they will tell you they can’t because of official secrecy. If you don’t bring the freedom of information Act, and ask the special prosecutor to do its job, you are going to complicate things for him,” he said.

But financial analyst Mr. Casely Hayford thinks otherwise. Passing the RTI bill, according to him isn’t that important. And this is his argument: “Since the Constitution guarantees those same rights the Bill would have offered, its passage was unnecessary. “This Right to Information Bill is now a dinosaur. We don’t need it. The Constitution gives us those same rights,” he submitted.

History of the RTI bill
The RTI is a fundamental human right guaranteed by the country’s 1992 Constitution, and recognized as a right under International Conventions on Human rights. The Bill, as it has been drafted, is to also give substance to Article 21 (1) (f) of the Constitution which states that, “All persons shall have the right to information subject to such qualifications and laws as are necessary in a democratic society.”

It must be noted that governments before the current administration have failed to ensure its passage despite several assurances. Can the NPP government have RT Bill passed? It remains to be observed going forward.