For Gabon's sickly uranium miners, a long quest for compensation 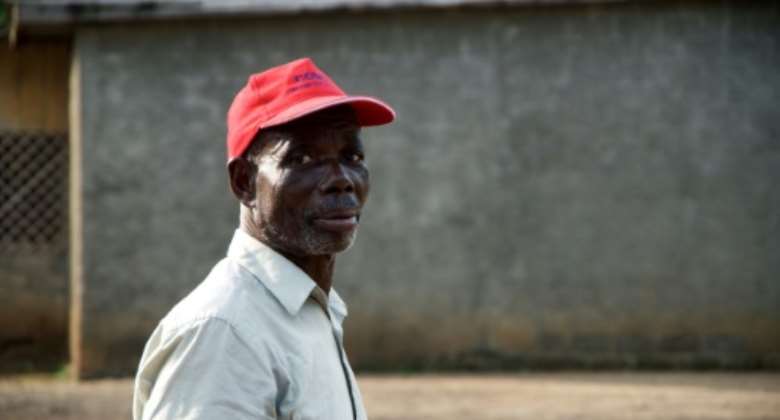 Hundreds of former Gabonese workers for La Comuf, an afiliate of the French group Areva, have been unsuccessfully demanding compensation for illnesses they believe are related to working in a uranium mine. By AMAURY HAUCHARD AFP

"We are all sick. It's our health, and we are being conned," Moise Massala says angrily.

The 82-year-old is a retired geochemist who used to work in a uranium mine in Gabon owned by French nuclear giant Areva.

He and hundreds of other former workers say they fell ill from their work to extract the uranium -- a source of nuclear power and warheads, but toxic and potentially carcinogenic.

The miners worked for an Areva subsidiary -- the Compagnie des mines d'uranium de Franceville, better known by its abbreviation of COMUF.

Over 38 years, the mine extracted some 26,000 tonnes of uranium near Mounana, southeastern Gabon, before closing in 1999 after the global price of uranium fell and the seam of ore began to thin.

By the end of 2016, 367 former workers had died from "pulmonary respiratory infections" linked to working in the mine, according to MATRAC, a campaign group gathering 1,618 former employees.

The surviving miners, many of them old and sick, have unsuccessfully demanded compensation for 12 years in the belief they were exposed to dangerous levels of uranium contamination.

Areva, a multi-billion-dollar business majority-owned by the French state, has repeatedly denied that it has any case to answer.

"No occupational disease related to exposure to ionising radiation" has ever been detected, it says.

Seven years after the Mounana Health Observatory OSM was formed, not one former mine employee has been compensated

An internal company mail dating from 2015, seen by AFP and independently verified, acknowledges that the company was aware many of its former employees had developed serious ailments.

In the mail, Areva's health director, Pierre Laroche, wrote that "many serious diseases have been detected among former employees, for example contagious tuberculosis".

For former workers, this proves the company's liability and justifies their claims for compensation, even if it does not legally prove all their illnesses are directly linked to excessive levels of uranium exposure.

The firm has refused to give payouts to the vast majority of its employees, apart from compensation payments in 2011 to the families in France of two French former mine workers who died of lung cancer.

The company has repeatedly argued it was difficult to establish if the rate of cancer cases among former miners was greater than those occurring in the wider population.

"That there was radioactivity in Mounana is a reality. (But) to what degree and to what extent the workers were affected, it will be very difficult to establish," a former senior executive of the mine told AFP, on condition of anonymity.

In similar disputes elsewhere in the world, experts acknowledge the difficulty of pinning cancer and respiratory diseases on nuclear exposure at work.

Smoking and other "lifestyle" habits could, for instance, be a cause.

Areva has been under pressure to compensate its employees for more than a decade.

In 2007, French NGOs Sherpa and Medecins du Monde (Doctors of the World) carried out field surveys in Mounana and in Niger, another Areva uranium mining site.

They published a report denouncing what they described as high rates of cancer among former employees.

A man points at an old uranium extracting shaft in Mounana, Gabon, where hundreds of men used to work

Areva agreed to investigate the situation and launched a health initiative in 2009 -- the Mounana Health Observatory (OSM) -- promising to pay compensation and treat former miners who fell ill, provided scientific and medical panels confirmed their disease was attributable to industrial causes.

Seven years on, not one former employee has been compensated.

"I've had difficulty breathing for 10 years," says 77-year-old Roland Mayombo, who spent 27 years in the mine.

"I went to the OSM four times a year, but I have never had a result," he complained.

"We decided to stop going (to the OSM) because no one has ever given us our analysis results," said Estime Beno Ngodi, president of MATRAC, who says he is suffering from lung cancer.

COMUF accuses MATRAC of spreading "misinformation" and defends its handling of the health initiative.

It looked at more than 650 former workers but suspended the project in 2015 because of a boycott by MATRAC, says Gilles Recoche, COMUF's director of the board.

"We're proud of having set up a unique tripartite structure, which enabled former COMUF workers to benefit from a free medical visit," he adds.

For the surviving miners, their long battle to prove a direct link between their illness and uranium contamination goes on. But, for many, age and sickness are wearing them down.

"It's battle between David and Goliath," sighs Massala.