Opinion: The Untold Story Of Fort Sebastian In Shama 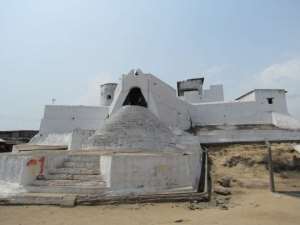 Accra, Nov 23, GNA - Ghana has many historic and tourist sites scattered across the country including; forts, castles, waterfalls, beaches, parks, mosques, cathedrals, among others.

However, over the years, these national monuments and heritage have been neglected and, therefore, not yielding the required revenue to the State.

A visit to some of these national historic edifices and tourist sites is very pathetic, with miserable state of affairs and one would hurriedly leave the place in view of the bad nature of the buildings and other facilities and unappealing ambiance.

Other African countries like Egypt, Kenya, Zimbabwe and South Africa are making a lot of money from their tourist sites that have contributed immensely towards their national economies.

BACKGROUND
A typical case in point is the Fort Sebastian in Shama in the Western Region, which has been neglected.

However, due to the unsuitable climatic conditions, they left the shores of the Gold Coast and the Fort was later occupied by the Dutch from 1664-1640 and the English occupied it from 1664-1665.

The Dutch used the Fort as a safe haven to keep slaves bought from their black masters before being transported to the sugarcane plantations in Europe and the Americas during the Transnational Slave Trade, which deprived most African countries' their able human resource amidst abuse of their human rights.

The GNA visit to the Fort Sebastian in Shama revealed that the Fort is serving useful purposes as a District Court, Office of the Shama Traditional Council and District Office of the Centre for National Culture.

In terms of patronage by both local foreign tourists is nothing to write home about as the building looked unkempt.

Mr Charles Mensah of the National Monument Board and Mr Kwame Botchwey of the National Centre for Culture, who were in charge of the Fort indicated said the patronage by tourists was low and noted that if the country pays attention to tourism, it could rake-in huge revenue for the government.

They said the Fort was about 491 years now since its construction by the Portuguese. They took the GNA round the various compartments, including ''the Gate of No Return'', the Male and Female Dungeons where the slaves were kept for more than three months before their departure abroad.

They showed the room where the mortal remains of slaves who died before shipment were kept, the tunnel used to ship the slaves, the room for the slave supervisors, the reception, the kitchen, the place used for entertainment by the white slave masters, an open place where female slaves were said to bath and the rooms currently serving as offices for the Shama Traditional Council, Centre for National Culture and National Monument Board.

They showed the GNA a metal-like cross erected at a small island in the sea by the Portuguese Missionaries, which is still there and a make-shift structure that accommodated the Portuguese for five years before completing the constructing of the Fort.

Mr Botchwey recounted a story where a seven-year-old boy, Anthony William Amu, who was captured along with his mother at Axim and brought to the Fort, but was later sent to Holland and presented as a gift to the Duke of Wellington, the Dutch King at the time.

He said the young boy was sent to Germany to study who became the first African to teach philosophy in a European educational institution.

He said the young boy after schooling in renowned educational institutions in Germany and other European countries obtained many degrees and master degrees, became known as Dr Anthony William Amu

Mr Botchwey noted that at age 78, Dr Amu, traced his root to Shama and died three years later and was buried at the entrance of Fort Sebastian.

RECOMMENDATIONS
It is time the Nana Addo Dankwa Akufo-Addo's government pays attention to the country's tourism potentials since it could serve as a cash-cow for the country.

It came as good news when the President promoted the Minister of Tourism and Creative Arts, Madam Catherine Abelema Afeku, to the Cabinet status, and it's the expectation of many Ghanaians that, resources would be channeled to the Ministry to revamp the sector so that Ghana could rake-in the needed revenue.

It's my fervent expectation that, the Ministry would channel the resources towards the renovation of the tourist sites and embark on massive online and media publicity campaigns to draw public attention to the various tourist areas in the country to increase patronage.

Officer arrested for forcefully kissing the thighs of woman ...
18 minutes ago

Police justify the use of force to arrest suspect at Mamprob...
22 minutes ago