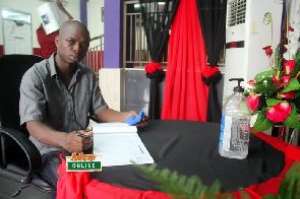 Maverick Brong-Ahafo Regional Youth Organizer of the ruling New Patriotic Party (NPP), Kwame Baffoe popularly known as Abronye DC was bringing the late presenter, Kwadwo Asare Baffour Acheampong some tubers of yam only to be informed about his sudden demise.

Recalling his last conversation with KABA, he described the demise of the astute broadcaster as ‘shocking’.

“I didn’t believe he was dead. God should keep him. It is painful. I spoke with him last week. I even promised him yams because he told me to bring him yams. We even laughed about it. On my way traveling to Sunyani I was given the sad news…” he said.

Nonetheless, he described KABA as a man of balance who was full of life and humble in nature.

“I delayed coming here because I wish it’s a lie. But my friends told me they have signed the book the reason I had to follow up…” Abronye maintained.

He prayed to the Almighty God to keep him humble soul in a special abode in heaven and grant his family, friends and the Multimedia Group the strength to remain strong.

KABA, as he is affectionately called, died after being rushed to the Korle Bu Teaching Hospital in Accra due to a short illness.