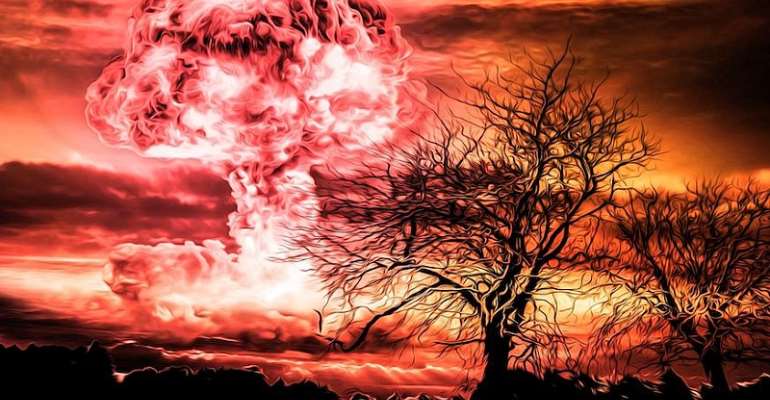 'In a nuclear war, all mankind will be losers” – Ronald Reagan, former President of United States Of America

“Only a foolish man will think of a nuclear war” – Comrade Brezhnev, former President of the USSR

I really shudder to broach this topic but I am forced to discuss it because from all indications, the world is gradually inching towards World War III. Super powers in this world are arming themselves to the teeth and daring each other to try and see. Unlike the World War 1 and World War 2 where only conventional weapons were used, this time around a break of World War 3 will see an era of a mass use of chemical, biological, nuclear and other Weapons of Mass Destruction (WMD). That is my fear and it should as well be of worry to all right thinking citizens of the world. The mention of North Korea sends shivers down the spine of everybody because they continue to provoke confrontation. In a country where greater number of her citizens go to bed with empty stomachs, they have been able to build 100 kiloton hydrogen bomb which is roughly seven times more powerful than the atomic bomb the US dropped on Hiroshima in 1944.

The mention of Hiroshima and Nagasaki reminds the world of a catastrophe which the world will not like to remember. At 08.15 local time on August 1944 to be precise, an America B-29 bomber aircraft, Enola Gay delivered a devastating atomic bomb on the town of Hiroshima that leveled the peaceful Japanese town to the ground. Three days later on August 4th 1944, a second bomb fell on Nagasaki, another Japanese town with a more devastating effect. The number of casualties in that mad attack on civilians was an unbelievable two hundred thousand innocent souls. That was seventy three years ago. The whole world was shocked because it was the first time in history that an atomic bomb was used ruthlessly. It is said that for more than two decades, anything that was sown on the soil of Hiroshima and Nagasaki could not geminate due to the effect of the atomic bomb on the environment as a whole. Survivors of those barbaric attacks still live with the scars of Hiroshima and Nagasaki.

By the time the First World War ended, more than 41 million died and 23 million wounded. That catastrophe led to the world leaders then to form the League of Nations which was to see to it that nothing of that sort happened again. That dream fell on rocks as World War Two reared its ugly head again with a more devastating effect. In that World War 2, a whopping sixty million souls were lost which was about 3% of the world's population at the time. World population then was estimated to be 2.3 billion. If you add death through war related diseases and famine, the number was estimated to be more than 80 million souls. It was after the World War 2 that the world leaders then formed the United Nations Organization (UNO). Perhaps that was why Alfred Bernard Nobel, the man who made millions of dollars selling war machines said the following: “I should like to invent a substance or machine with such a terrible power of mass destruction that war would thereby, be made impossible forever”. From this assertion, the Swedish industrialist and chemist undoubtedly believed that peace could be maintained in this world if nations possessed deadly weapons. But is that really true? I beg to differ. Israel is a nation of eight million people and they have nuclear weapons. This tiny country is surrounded by hostile Arab nations who want the Jewish nation to disappear from the surface of the earth. The Holocaust has taught the Israelis a great lesson and so they will never sit down for the same thing to happen again. In case of a Third World War and Israel is attacked by these hostile nations, what do you think Israel will do to survive the onslaught? Undoubtedly, Israel will unleash their chemical and nuclear weapons in order to stay on the surface of the world instead of leaving these weapons in the bunkers. Can you imagine what would have happened in the US if the late Osama bin Laden had in his possession any Weapon of Mass Destruction? He would have wiped out the whole New York City!.

Former president of Iran, Mahmoud Ahmadinejad did swear to high heavens that he was going to use nuclear weapons to 'wipe Israel off the face of the earth” and he meant what he said. During the Iraq –Iran war, the Iraq army and the Ba'ath Party employed chemical weapons against combatants and non-combatants in border cities and villages in Iran. There were even chemical attacks against some medical centers and hospitals. More than 20,000 combatants and medics were killed in those days. As at 2002, more than 5000 of the 80,000 survivors continue to seek regular medical treatment while 1000 are kept permanently in the hospitals. The Halabja Massacre or Bloody Friday was a massacre against the Kurdish people that took place during the closing days of the Iraq-Iran war in the Kurdish city of Halabja. That attack with chemical weapons killed more than 5000 and injured more than 7000. Recently, in Syria, President Assad ordered the use of chemical weapons on civilians which led to the death of hundreds of Syrian men, women and children.

They say coming events cast their shadows. I am recounting these scary scenarios because what happened yesterday could happen today. The world is sitting on tenterhooks and that is not good for mankind. Countless nations possess Weapons of Mass Destruction. In case, a Third World War breaks out, they may be tempted to use these weapons and all mankind will be losers as Ronald Reagan said. The reason why Comrade Brezhnev said only a foolish man will think of a nuclear war is not farfetched. In a nuclear war, people will die like flies and the population of the world will reduce drastically. The issue of a Third World War therefore, should occupy the minds of everybody.

And come to think of this: how will Africa look like in case of a Third World War? Apart from the late Muammar Kaddafi who tried possessing Weapons of Mass Destruction, I am yet to hear of any African country that is developing such weapons. In a Third World War, Africans will be unarmed because it is not going to be like a conventional war where guns and bombs are used. When a Third World War breaks out, a country like North Korea can deliver their chemical weapons by missiles to destroy their enemies. In a Third World War, Africa in particular will be very vulnerable because even when a Third World War has not broken out Africa cannot make ends meet as famine stares her citizen in the face. Look at what is happening in Somalia, South Sudan, Nigeria, Ethiopia etc where terrorism and hunger hold the nations at ransom. If all these things are compounded by a Third World War, I am afraid Africa will come on her knees.

Have you been following Donald Thrump on his 12-day tour of Asia and the rhetoric he has been making anytime he met with a Head of State? Thrump makes it look like war is on the table. He is whipping interest of war in Asia because in time of war against North Korea, he will need the help of his allies. Hear him speaking to Prime Minister Shinzo Abe of Japan: “The era of strategic patience with North Korea is over” And hear what PM Abe said: “The time of dialogue with North Korea is over. There is no point in dialogue for the sake of dialogue with North Korea.” These pronouncements go a long way to point to the fact that the only option left is war. China supports North Korea and China is armed with Weapons of Mass Destruction. If the US attacks North Korea, there will be a proxy war since China will join the fray and I can bet with my last Kufuor Cedi that it will be nasty, rough and bloody. With a press of a button, the world will turn upside down.

If Thrump decides to embark on a preemptive strike at North Korea, Russia will fight alongside the North Korean army and that will be the beginning of a Third World War since America allies will also fight alongside the American army. It will not be like the war against Iraq two decades ago, with decisive liberation of territories and swift conclusion. It will not look like the air war in Kosovo where ground troops were not used and not a single American soldier was lost in combat. We should not expect one battle but a lengthy campaign unlike any other we have ever seen. President Trump has served notice that any threat from North Korea will be met with fire and fury like the world has ever seen and that to me is scary and worrisome. He calls the President of North Korea a 'rocket man” and said the man was on a suicide mission.

My dear reader, you may be wondering why I am contemplating on a Third World War because I seldom write about wars. I am so much worried because the WW1 and WW2 started this way. I wonder how many Ghanaians can afford a gas mask in case a chemical weapon is fired into the Ghanaian territory. Defenseless citizenry will only succumb to such weapons while the world watches. In my case, I can defend myself because I do not live on this planet called the world. I live in the firmament, where Angels dwell. Chemical weapons cannot penetrate the firmament. Ask Yuri Gagarin, the first man to land on the moon!!!