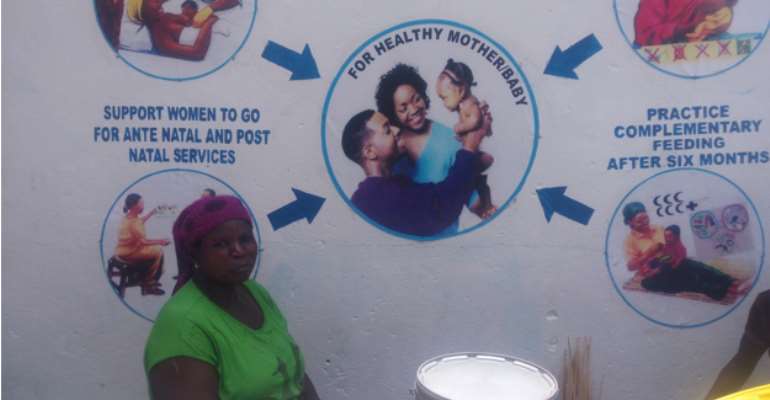 One of the major barriers to accessing quality health care being it either maternal or infant health care or any health issue is the use of the English Language by Health Professionals as a medium of communication in many of the country’s health institutions to administer health care to patients.

It is a known fact that majority of the Ghanaians populace particularly those living in the rural settings are illiterate and therefore mostly find it difficult to understand the English Language let alone to communicate the language. This makes it difficult for such people to access health care in the health facilities which are man by health professionals who could not also speak the local dialects of the communities they are providing health care to.

For instances it would be very difficult to propagate , create and deepened the awareness and understanding on the importance of exclusive breastfeeding , post-natal and ante-natal services to rural settings in order to reduce maternal and new born deaths , using the English Language as a medium of communication.

One of the major tool that could be used to confront this challenge is the application of Visual Communication . Visual Communication have the greatest potentials in breaking the Language barriers since the images also known as mural when adopted could be easily understood by patients who could not speak or understand the English Language.

The cliché, that “a picture tells a thousand words” is very authentic. There is real value in using images to promote scientific content. Images help us learn, images grab attention, images explain tough concepts, and inspire.

Again , research had shown that Human beings are very visual creatures. A large percentage of the human brain dedicates itself to visual processing . Human beings love for images lies with their cognition and ability to pay attention. Images are able to grab human beings attention easily and they are immediately drawn to them.

Research had also proven that Human beings process images at an alarming speed than words. When Human beings see a picture, they are able to analyze it within a very short snippet of time, knowing the meaning and scenario within it immediately. Research further indicates that the human brain is able to recognize a familiar object within 100 milliseconds .

Images also have the potential to get an emotional response from your audience. This is necessary when one wants the work he or she is promoting to have an impact on users. For instance bright colors capture our attention because our brains are wired to react to them. Our vision senses are by far our most active of the senses.

Perhaps it is in recognition of the importance of Visual Communication in communicating health messages that informed the decision of UNICEF- Ghana to collaboration with the Ghana Health Service in partnering with Rural Initiatives for Self- Empowerment-Ghana (RISE-Ghana) to use the medium of paintings as known mural to communicate the benefits of post-natal and ante-natal services to communities in the Kassena-Nankana West District.

The project is part of UNICEF- Ghana and the Ghana Health Service Mother Baby Friendly Health Facility Initiative (MBFHI) Project aimed at communicating the health benefits of post-natal and ante-natal services, increase uptake of optimal breastfeeding as well as promote the support of power structures to increase demand for the services towards a reduction of maternal and neo-natal deaths.

Whilst one of the wall paintings or murals is constructed at the Sirigu market, the other one is located at the China health centre, all in the Kassena- Nankana West District.

Briefing the media after a tour embarked by RISE-Ghana, locally based Non-Governmental Organization (NGO ), to communities to ascertain the impact the murals were having on maternal and infant health in the area, Mr Awal Ahmed Kariama, the Executive Director of RISE-Ghana, said in spite of the various efforts to increase demand for ante-natal and post natal services, patronage continues to be very low in some parts of the country hence, hence the need for innovative approaches to reach them.

He said UNICEF Ghana, the Ghana Health Services and other Civil Society Organizations (CSO) have been using various strategies such as information, Education and Communication (IEC) materials , pregnancy schools, durbars and community fora to create awareness and deepen understanding on the importance of post-natal and ante-natal services in reducing maternal and new born deaths.

He said the new innovations and non-conventional approaches such as the Visual Communication have been successful and expressed the hopefully that it would sustain the progress chalked by UNICEF Ghana, the Ghana Health Services and other CSOs by getting people in communities to participate in dealing with the concern.

Mrs Ayamah Akwara, a trader at the Sirigu market where one of the wall painting is displayed, said it did not only attract customers to her business but had also opened up discussions around breastfeeding and other health concerns with men who traditionally would not discuss such topics in public.

Mr Barnabas Aduko, the Assemblyman for Sirigu Central electoral area, commenting on the mural, said apart from it being an effective method of communicating important health issues and relaying messages that would encourage women to seek health care during pregnancy, it was also able to break the barriers of communication as the images depict the health needs of women and children.

“We in consultation with women, husbands and community leaders who shape decision-making in communities designed and placed the two murals in the most visible and unconventional spaces like markets and health centres. These are generating meaningful dialogue and increasing the visibility of the benefits and barriers to optimal breastfeeding, ante-natal care and post natal care services among market goers who traditionally will not have seen such important messages”, the Assemblyman said.

In conclusion from the above analysis one can see the power of Visual Communication in communicating health messages particularly on maternal and infant health, exclusive breastfeeding and complementing feeding among others. It should be put on record that images are vital part of science communication, and should not be cast out in favour of long blocks of text. In order to break down the often complex messages of science, one needs the help of Visuals and this exactly UNICEF-Ghana in collaboration with the GHS is partnering with RISE-Ghana to achieve. What is needed more is for UNICEF-Ghana and the GHS to partner with RISE-Ghana and other CSOs to scale up the Visual Communication components in more communities and health centres across the rest of the region. This would help fast-track the effective implementation of the Mother Baby Friendly Health Facility Initiative (MBFHI) Project aimed at communicating the health benefits of post-natal and ante-natal services, increase uptake of optimal breastfeeding as well as promote the support of power structures to increase demand for the services towards a reduction of maternal and neo-natal deaths.

One of the murals at the Sirigu Market shed depicting on the need to support women to go for post -natal services, exclusive breastfeeding and complimentary feeding after six months