The LPG Marketing Companies Association of Ghana, has subtly downplayed the concerns being raised with the siting of petrol and gas stations with a call for the strengthening of safety procedures.

The Association in a statement released following the massive explosion at a gas station near Atomic Junction in Accra on Saturday, maintained that Liquefied Petroleum Gas (LPG) “in itself is safe” as it has been processed for people to use.

Thus, the LPG Marketing Companies believe poor handling may have resulted in the explosion at Atomic Junction as it noted that “where safety procedures are not properly implemented, there will always be issues irrespective of location.”

This is a sentiment that has been conveyed by Fire Service's Deputy Director of Public Relations, Billy Anaglatey, and the Minister of Environment, Science, Technology & Innovation, Professor Kwabena Frimpong Boateng, despite the Atomic explosion being at least the eighth major gas explosion since 2014.

The effect of the massive explosion is slowly spreading in the form of protests against seemingly haphazard siting of gas and fuel stations in residential and densely populated areas.

Residents of Ritz junction in Accra, for example, on Sunday staged a demonstration to demand the removal of a Gas Station located in the area.

Students of the University of Professional Studies, UPSA, Accra, also plan to rekindle protests against the siting of a fuel station next to its campus.

But the LPG Marketing Companies Association believes the explosion should ginger regulatory authorities and all stakeholders in the industry “to concentrate on creating a robust safety regime of procedure, supervision and monitoring function.”

“It is unfortunate that previous reports concerning similar explosives have not been thoroughly analyzed and put before the public. It is also important to emphasize that most of these explosions, about 90 percent, occur during discharges from the truck tanks (Bulk Road Vehicles, BRVs) into the station tanks. This implies poor attention to safety measures during discharge. The industry must be prepared to invest in safer management as the number one priority of the user public,” the statement concluded. 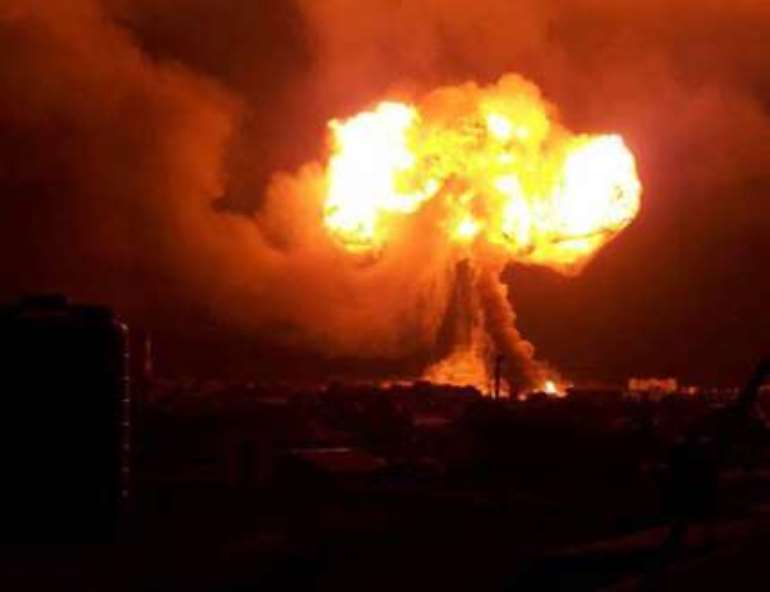 A massive mushrooming fireball engulfed lit up the sky after the explosion.

Despite the concerns with safety, the Association is however against the National Petroleum Authority’s plan to introduce a Cylinder Recirculation Module which seeks to ensure the safe distribution of Liquefied Petroleum Gas in the country.

Indications from the hierarchy of governance indicate that, further protests in this regard will not be countenanced, as the Vice President communicated a resolve to put the interest and concerns of the people first.

“Some new policies are going to come in and those who are going to try to resist those policies, I don't think they will be listened to because it is important for us to put the safety of our people above everything else,” the Vice President, Dr. Mahamudu Bawumia declared from the scene of the explosion.

The Government is expected to hold a crunch cabinet meeting over Saturday's gas explosion, and speaking during his tour of the Northern Region on Sunday, President Nana Akufo-Addo said one of the main issues for the meeting is to decide on the way forward for the prevention of such explosions.