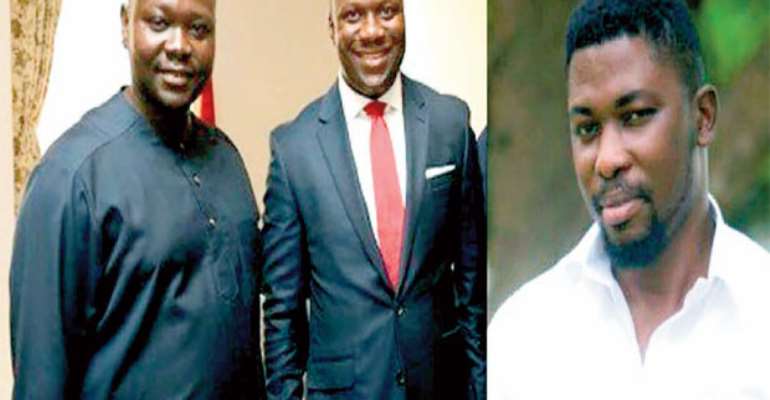 The final report on the investigation conducted by the Criminal Investigations Department (CID) of the Ghana Police Service into the corruption allegation against the two deputy chiefs of staff by controversial musician and satirist, Kwame Asare Obeng aka A-Plus, is out with startling revelations.

According to the over eight-page report of the investigators, led by COP Bright Oduro, Director General (CID), A-Plus could not provide any evidence which suggested that the two deputy chiefs of staff – Francis Asenso-Boakye and Samuel Abu Jinapor – were involved in any corrupt practices but based his allegation on personal opinion.

The investigators therefore described the allegation by A-Plus as baseless, unsubstantiated and without credibility.

How It Started
On August 27, 2017, Kwame A-Plus accused Messrs Francis Asenso-Boakye and Samuel Abu Jinapor of corruption, thievery, arrogance and stupidity on his Facebook wall and wondered why President Akufo-Addo appointed them to the positions they occupy.

Following the allegation, President Akufo-Addo ordered the Financial Forensic Unit of the CID to look into the matter to establish the authenticity or otherwise of the allegation and to take action against the individuals per Section 239 of the Criminal and Other Offences Act (Act 29).

A-Plus Statement To Police
On September 5, 2017 A-Plus responded to an invitation by the police to give his statement on the allegation.

In his statement, the musician, who is now the special aide to Dr. Felix Anyah, Acting Chief Executive Officer (CEO) of the Korle-Bu Teaching Hospital (KBTH), denied accusing the two deputy chiefs of staff as thieves, but stood by the allegation of corruption against them.

Giving reasons for his allegation, A-Plus said the acting CEO, having known him for the past six years, particularly requested him (A-Plus) to seek public and the staff perception about the Korle-Bu Teaching Hospital with the view of putting corrective measures in place to resolve them.

On his maiden familiarization tour of the hospital facilities, A-Plus said he accompanied the CEO on his rounds and it was observed that the hospital has no knowledge of actual revenue collected for a day or a period because the financial institutions – Stanbic Bank Limited and uniBank Ghana Limited – that do the collections, do not credit the accounts of the hospital on the same day.

“The banks decide how much to be credited to the hospital's accounts and there is no way the hospital can confirm total collections for the day or at any given period and due to the fact that there is no interface between the two banks that are doing the billing and the collections, revenue leakages continue to occur at the hospital,” A-Plus indicated.

According to him, in his later discussions with the management, it became apparent that an efficient Hospital Management Information System (HMIS), which links units and equipment such as X-Rays, CT scan, and laboratory to indicate actual services rendered and how much is charged for each service was needed by the hospital to stop the revenue leakages to improve KBTH finances.

He said based on the decision by the management of the hospital in June 2017 – which he was part of – the CEO directed the head of legal department to write to uniBank to cancel the existing Memorandum of Understanding (MoU) with the bank.

On July 12, 2017 a letter terminating the agreement between KBTH and uniBank was sent to the bank giving them a 90-day notice after they had detected several weaknesses from the bank's past operations at the Police and Ridge Hospitals, referencing a letter from the deputy controller and accountant general that suggested that Unibank was inefficient in its operations.

According to A-Plus, when the letter to the bank intended to cancel the MoU was delivered, the two deputy chiefs of staff called him and the CEO severally, asking the CEO to withdraw the cancellation of the MoU because uniBank had supported the New Patriotic Party (NPP) financially during the campaign period.

He therefore concluded that in his personal opinion, Francis Asenso-Boakye and Samuel A. Jinapor, who are government officials, had taken advantage of their position to favour a private business entity.

CEO's Testimony
Police investigations were extended to Dr. Felix Anyah, the CEO, by the investigators and were met together with three management members in his office.

He said he first of all observed that there were revenue leakages, no beds at the emergency department, malfunctioning of life support equipment and poor supply of oxygen, among others.

“The management at a meeting, therefore agreed for the use of ICT software to electronically manage the process,” he said.

Dr Anyah stated in his statement that another issue that came out during their meeting was the use of two banks operating without an interface system to communicate, worked against the interest of the hospital and needed to select one efficient bank to help resolve the lapses and weakness in managing the revenue mobilization at the hospital.

“Management, however, thought it will be in the interest of the public if one Bank (Stanbic Bank) does the collections and so a termination letter was sent to uniBank but before they could respond to the letter, calls started coming in from influential persons asking him to withdraw the termination letter.”

The acting CEO said no reasons were given except that he should withdraw the letter.

Notable among the callers were the Minister of Lands and Natural Resources, John Peter Amewu; Minister of Health, Kwaku Agyemang-Manu; Deputy Chiefs of Staff Francis Asenso-Boakye and Samuel Abu Jinapor.

Abu Jinapor's Testimony
On September 7, 2017, Messrs Francis Asenso-Boakye and Abu Jinapor responded to police invitation where Jinapor said he received a complaint from the CEO of uniBank that the contract with KBTH had been abrogated in favour of a wholly foreign owned bank to do cash collection at the hospital.

He said uniBank was not given any opportunity to demonstrate its ability to also use electronic means to collect cash for the hospital as given by Stanbic Bank.

Mr Jinapor said on receipt of the complaint, he called Dr. Anyah to seek clarity on the complaint but the CEO responded by saying he was at a programme at Sogakope and that he would call back, but never did.

He added that he was therefore compelled to inform the Chief of Staff, Akosua Frema Osei-Opare, and his colleague Francis Asenso-Boakye about the complaint from uniBank.

Asenso-Boakye's Testimony
Francis Asenso-Boakye also stated that in July 2017, he was informed by his colleague, Samuel Jinapor of a complaint by uniBank against Korle-Bu for abrogating a contract between uniBank and KBTH and called the CEO to confirm the matter.

He said he only sought to draw the CEO's attention that abrogating a contract was a major decision and that the CEO should have waited until there was a board in place but never put pressure on the CEO as stated.

uniBank's Statement
The team finally met officials of uniBank at its head office and met the Executive Director, Ekow Nyarko Dadzie-Dennis, and the Legal Team.

The bank revealed that before the current administration, there was an MoU between them and KBTH for cash collection and had invested GH¢1.4m at the hospital

It said in July 2017, uniBank received a letter from KBTH terminating an MoU between them and gave a 90-day notice to wind up without any reason.

Officials narrated that apart from the initial teething problem during the implementation, KBTH never officially complained to uniBank of any challenge as far as the billing and cash collections were concerned, adding that the bank was not treated fairly.

It claimed copies of its letters were sent to the vice president, the chief of staff, the Minister of Finance, the Minister of Health and the Controller and Accountant's General Department to intervene to allow uniBank to do the cash collection because of investment they had put in at the hospital.

Findings
The investigators, after contacting the parties involved, established that there was an MoU between KBTH and uniBank before the CEO of KBTH, Dr. Felix Anyah took office.