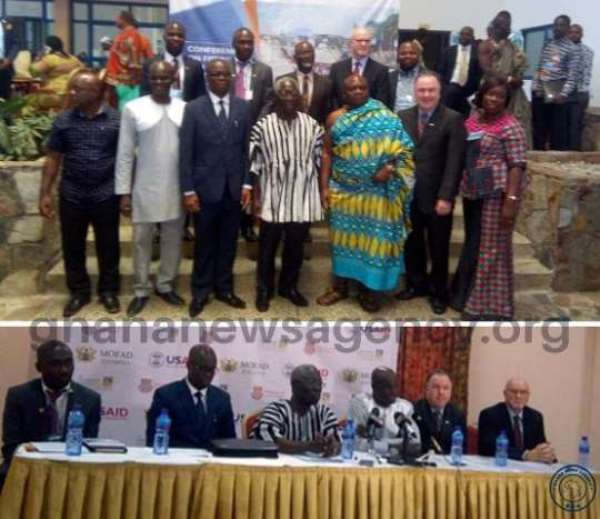 Accra, Sept. 27, GNA - Mr Yaw Osafo-Marfo, the Senior Minister at the Presidency, on Wednesday, said the Government by an Executive Fiat, has declared a : 'RED ALERT,' in all forms of illegal, unreported and unregulated fishing methods in Ghana.

He said the relevant law enforcement agencies were, therefore, enjoined to carry out the order to the letter.

He has also called on the media to partner the Government and other stakeholders to fight illegal fishing, as in the case of illegal mining, to ensure sustainable development of the fishing industry.

'I am reliably informed by the experts in the fishing industry and the sector Minister that the harm we cause to the fishing industry in Ghana through illegal and unregulated fishing is far worse than what illegal mining, otherwise known as galamsey, is causing to our rivers, forest reserves and farming lands,'' he said.

The Senior Minister said over the period, there had been emphasis on voluntary compliance of the fishery laws but regretfully, most of the fisher folks had failed to heed to the call, giving way to increase in illicit fishing methods coupled with its economic and health implications.

He noted that the importance of fisheries in national economy was very great and that the industry provided direct and indirect support for over two million people in the country.

He said in terms of the economy, fisheries contributed about four per cent of Gross Domestic Product; while it was also the main source of animal protein in many homes, thereby contributing substantially to food security.

About 60 per cent of protein content of our food is from fish sources, he said.

Mr Osafo-Marfo said given the importance of fish and fisheries resources in the lives of the people in the country, it was important that no stone was left unturned in the collective effort to rebuild sustained fisheries.

He, therefore, commended the UCC, USAID-SFMP and other partners for organising the conference and collaborating with the Government to help sanitise the fishing industry.

He said the Government for its part, was committed to seeing that the fisheries were developed, sustained and exploited rationally in a cost effective manner.

He enjoined all stakeholders to also commit themselves in achieving the goal of sustainable fisheries for the betterment of all.

'Those of you who have the responsibility of overseeing the activities of the landing beaches are equally enjoined to provide all necessary support and cooperation to the law enforcement agency to ensure an effective implementation of this order in our common effort of building an independent, prosperous and great nation,' the Senior Minister said.

Anyone who will speak against the National Cathedral will di...
8 minutes ago