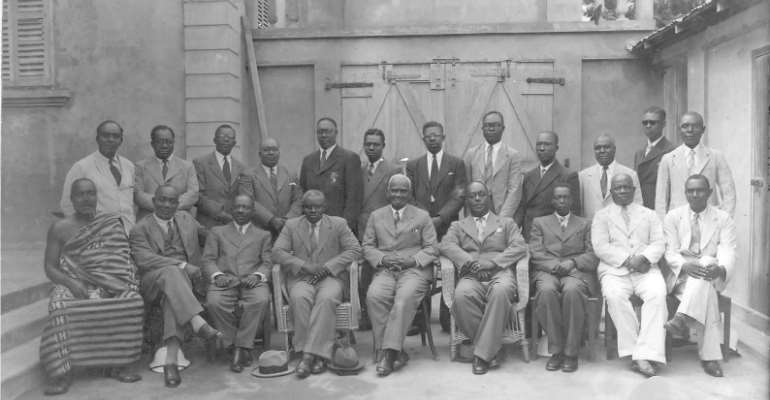 Mr. George Alfred Grant was elected the first president of the pro-independence nationalist organisation, the United Gold Coast Convention (UGCC), which came into being exactly seventy years ago today.

In a sense, the election of Paa Grant - as he was popularly called - as the UGCC's first president was to acknowledge the pivotal role he played in bringing together its first members and helping to finance what was unquestionably the Gold Coast's then most significant pro-independence political organisation ever to be organised, since the country's occupation by European colonisers, at that particular stage of the colony's history.

More than most, amongst the Gold Coast's indigenes, the incredibly wealthy Paa Grant's business interests, which were international in scope, and his accumen as a businessperson, made him see clearly how the colonial system was being used to exploit the colony's vast natural resouces, not for the betterment of people of the colony, but for the benefit of the colonial power at the time, Great Britain.

He understood that if the nation was to be ever developed into a modern country, and its abundant natural resources used for the benefit of the people of the Gold Coast, power would have to be wrested from the British colonial occupiers.

Unfortunately, such was the mentality and worldview of the elitist individuals who the UGCC attracted to its fold and constituted its main base that as the years went by, most ordinary people at the time began to feel that it didn't serve their interests and thus became alienated from it.

They gradually came to the conclusion that if the Gold Coast became an independent federation of the pre-colonial entities that existed before colonial rule was imposed on the country - which was the end ultimately sought by the bulk of the UGCC's leaders - they would only be substituting one set of remote masters for yet another group of elitist and exploitative leaders who were disdainful of ordinary folk.

Having thus failed to correctly read the mood of the ordinary people of the Gold Coast - a mood Nkrumah's sensitive political antenna quickly picked up not too long after he returned to the Gold Coast at the UGCC' s invitation in 1947 - the UGCC's fate was sealed as a serious pro-independence nationalist political organisation.

That is why when Nkrumah and his followers finally broke away from the UGCC to set up the Convention People's Party (CPP) in 1949, it repeatedly routed the UGCC and its offshoots - the National Liberation Movement (NLM) and the ineffectual United Party - in the elections of 1951, 1954 and 1956.

Nkrumah's genius was that he understood clearly that there could be no accommodating a racist system that at heart regarded people of colour as inferior beings and the Establisments of which felt that access to their colonies' bountiful natural resources was the birthright of the colonialists to freely exploit, so as to enrich their own metropolitan nations' Establishments' and ruling elites.

That is was why Nkrumah, who sought a unitary post-independent state that had universal adult suffrage - as opposed to the federal state consisting of the pre-colonial traditional states in which the vote would be restricted to property owners and wage earners only that his political opponents sought to replace the departing colonial government of the British occupiers of the Gold Coast with - became hugely popular with ordinary people across the country.

Simply put, the UGCC was a doomed and elitist nationalist political organisation that was eventually outwitted by ordinary people - who quickly came to see through its secret agenda of a post-independence nation-state forever dominated by the beneficiaries of inherited privilege who were the progeny of the pre-colonial ruling elites: and therefore threw their weight behind Kwame Nkrumah's CPP whose vision of an egalitarian society in which there was social mobility and sundry social safety nets for the vulnerable, resonated with them.

That is why the UGCC and its offshoots could not compete with Nkrumah's CPP in all the free and fair elections organised by the British colonial regime that they took part in - in 1951, 1954 and 1956. It is also the reason why it is Nkrumah who is the founder of modern Ghana - for it is his vison of the post-independence unitary state replacing the colonial regime that prevailed: not that of the UGCC's leaders who wanted a federal state consisting of the tribal entities of the pre-colonial era.

Posted by Kofi Thompson at