The US Embassy Should Learn Something About Ghanaian Names 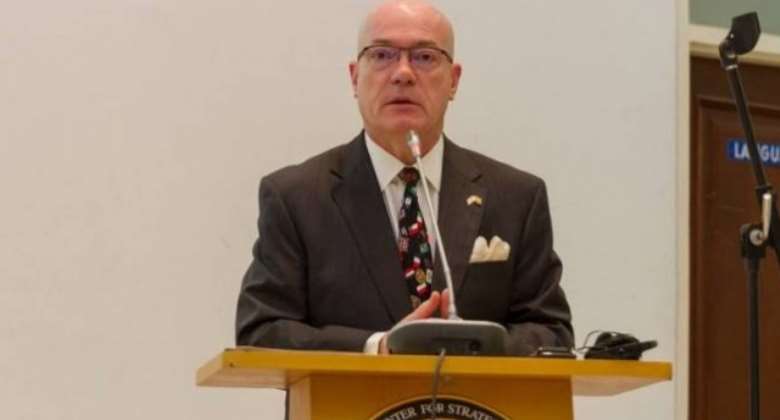 US Ambassador to Ghana Robert Jackson

It would be in the interest of the US Embassy (Embassy) and its numerous customers in Ghana to take sometime of its busy schedule to learn something about names in Ghana. This would inform the Embassy to be fair in its decision-making involving Ghanaian names. It would be wrong for the Embassy to rely on the simplistic US’ approach to choice of names of its citizens to determine same for the Ghanaian ignoring the tradition (or complexities) attached to names in Ghana.

For a start, the Embassy should be informed that almost every Ghanaian (especially the Akans such as Asante, Akuapim, Akyem. Brong, Fante and Nzema) has two names – traditional/informal and the formal/official. Each is used intermittently depending on when and where the individual is and who knows what.

Ghanaians believe that individuals come to this world with their first names determined by the day he/she is born. There is a name for each of the seven days of the week for both men and women. These are:

Day Feminine Masculine
Monday Adwoa Kwadwo
Tuesday Abena Kwabena
Wednesday Akua Kwaku
Thursday Yaa Yaw
Friday Afua Kofi
Saturday Ama Kwame
Sunday Akosua Kwasi.
Following this is the surname given to each child by the father. In most cases the father chooses the names of his children from among known personalities within his maternal lineage. The father has the option to name his child after himself. Thus a boy can be called Kwasi Derkye with the “Kwasi” representing his day of birth - Sunday and ‘Derkye” being a name after a member of the father’s maternal lineage. The same applies to a girl who may be called Adwoa Frema with the “Adwoa” representing her day of birth- Monday- and “Frema” possibly being the father’s mother.

In this example the names Kwasi Derkye and Adwoa Frema are what the Akans consider as the traditional/informal names. From infancy and throughout their lives those familiar with Kwasi Derkye and Adwoa Frema would call them by these names. Some of these names are not recorded but logged in the memory of those who were present either at the naming ceremony or those who would grow up with them.

With the advent of Christianity, the introduction of formal education and the need for documentation in the form of birth certificates, parents have adopted the formal/official name concept. Christian families baptize their children in the church, give them biblical names and add the father’s last name at the end. For example “Kwasi Derkye” could then become either Joseph Derkye-Mensah, Joseph Mensah or Joseph Kwasi Derkye Mensah and Adwoa Frema would be Mary (Adwoa, Frema-) Mensah. These names would be those recorded on birth certificates and appear on all official documents. The “Mensah” being the father’s last name.

The Embassy should be informed that if a Ghanaian is asked if he/she had used other names before and a name like Kwasi Derkye or Adwoa Fremah is given the individual should not be asked to provide documentation to prove when he stopped using that name. For (i) the name is still being used and (ii) there is no documentation to show when it was used and stopped. In the US there would be documentary proof but not in Ghana.

The author is privy to an applicant for an immigrant visa who was asked the following questions:

US Consular: “Who introduced you to your husband?’

US Consular: “Any other name?”
Applicant: “Mr. Kofi Asenso”
US Consular: “So you do not know the name of the person who introduced you to your husband?”

Applicant: “Mr. Asenso! - that is the name I know him for; that is how everybody in my neighborhood calls him.”

As an American, the Consular concluded that the applicant was doubtful while the applicant also became frustrated because the Consular would not accept her response as correct. The Consular’s decision is informed by his/her tradition/background - negatively affecting the applicant who by all intends and purposes was telling the truth.

If the Embassy had done some research it would know that the applicant was actually telling the truth. The applicant knew him to be Mr. (Kofi) Asenso while the official name on record with the Consular is “Elijah Asenso Mensah”

More disturbing is the fact that the applicant is not literate enough so the application was put together by another person.

At the same interview this also happened:
US Consular: “What is your name?”
Applicant: “Grace Mensah”
US Consular: “Do you have other names?”

This is how the interview ended – a classic case of clash of cultures. She would not be able to prove when she started using that name let alone show when and why it ended. She is still using the traditional name. As a Ghanaian, Grace Mensah is also known as (aka)

This is the more reason why the Embassy need to retune its approach to interviewing Ghanaians about their names. The Embassy should consider the traditional/informal name as “alias” or “aka – also known as” to avoid the embarrassment or the mistrust it uses to make some of its decisions. .

Hopefully, this piece would throw some light on this Ghanaian tradition and help the Embassy to be fair to its customers.

The link below can throw some light on Ghanaian names: