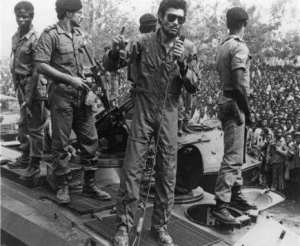 It is said that evil triumph only because good people sit and do nothing. A week after the gruesome murder of the late Captain Maxwell Adam Mahama, some Ghanaians, if not all, were looking out for the occasion of June 4th Anniversary celebration to address the questions associated with the breakdown of laws and morality in our society, but our expectations were home to the unexpected. Listening to former President Rawlings speak over the weekend as part of 38 years of what was meant to be a revolution to set Ghana on the path towards a civilized and a developed nation has left much to be desired - with allegations of “greediness and corruption” on the part of the former government been the foremost issue.

It is true that where leadership is found, problems do not find comfort. However, these days, the front of immorality and lawlessness seem to have found its peak of comfort in our society – from the avalanche of galamsey, down to open rebellion in the courtroom, and up to the dastardly acts of lynch mob. The search for probity and accountability to knit the moral fiber of our society – to deal with these cankers - has not yet been found. In these situations, where leadership is lost, lawlessness reigns in the society.

When we look across the leadership of this country today, we will find no other than former President Rawlings whose zest for morality remains unmatched. Although there is a lot fear in the world right now, the relatively peace and stability that have occurred in Ghana since 1982, were executed by his bated breath, as a reward for the struggle for freedom and justice.

In our modern Ghanaian society, the order of society is by laws. But the question is: how well do the laws of our society support morality? A law must protect the values of society. For this reason, a law which does not relate to society is no law, and as such, a violation of law. Morality and law are mutually inextricable. As morality is a set of guided principles or behaviors of individuals, it is brought forth under coercion by social laws. Right and wrong, in the context of morality, are derivative of the dynamics of time and space.

In addressing moral issues to the crowd, His Excellency the former president made a fervent allegation of corruption against the erstwhile government - which he believes led to the defeat in the general elections. The question that comes to mind is this: could it be that what caused the defeat of the Party under his government in the year 2000 general elections was also corruption? Perhaps, if avoiding corruption is the index proposition to win an election, then some Parties in opposition would not pass the test to contest in an election.

In as much as corruption could be part of the cause of election defeat, the entire problem of apathy which affects the results of elections are usually against the ruling Party after every 8 years. In the recent general elections, while NDC lost a maximum of 872,410 votes from the previous elections, NPP added a minimal of 433, 807 votes from the previous elections - amidst all the promises and the smear campaign of corruption by then opposition Parties.

Corruption is a product of a social raw-material. It is never a cause, but an effect of a weak governing system.

This weakness is attributed to the structures of a system or an institution. When a system is strong, the tendency to abuse it is intrinsically inept and avoidable. Abuse of incumbency, hitherto known as corruption, is endemic in weak systems or institutions. Therefore, when former President Mahama allegorically spoke of the “lame horse”, he was in reference to the institute of the Party. Ideally, the strength of a Party across all levels will ensure that the leadership that it produces is strong to ride the horse or the Party to its desired destinations.

Again, I do not sincerely believe it was appropriate for the Party Founding Father to call for the withdrawal of the Party National Executives - on the basis of corruption. Once more, the fundamental questions to ask are: will corruption in the Party stop outright if these executives resign? What happens to members of the Party who do not seem to imbibe within them the ideal or traditional elements of the Party?

Leadership emerges out of the people, and the great ones emerge out of crisis. When Ghana’s economy was growing negatively from 5% to 7% with an inflation of 54% in 70’s, in addition to smuggling and ‘kalabule’ characterized by shortages, lack of foreign exchange and with almost everything breaking down, the situation provided the revolutionary atmosphere for the change of social order and life of Ghanaians. The dynamism of such situation makes it easier to excite human patriotism and to mobilize people to face prevailing problems which threaten their lives. Unfortunately, that dynamism does not exist today. The dynamic of a time determines the leadership, and no man can put a full stop when God’s finger is moving.

It appears that the former president, because of his ardent desire for the goodness of society is still nostalgic of the June 4th era, and believes that the dynamic of that era still operates. There is no doubt that former president has a prestige. He rescued Ghana from the precipices and racks of humiliations. He still bask in it, but there is a veiled warning from a quote by Andrew Young, an African – American Civil Rights Activist, and a former United States Ambassador to the United Nations during Carter’s administration: “influence is like a savings account. The less you use it, the more you have.”