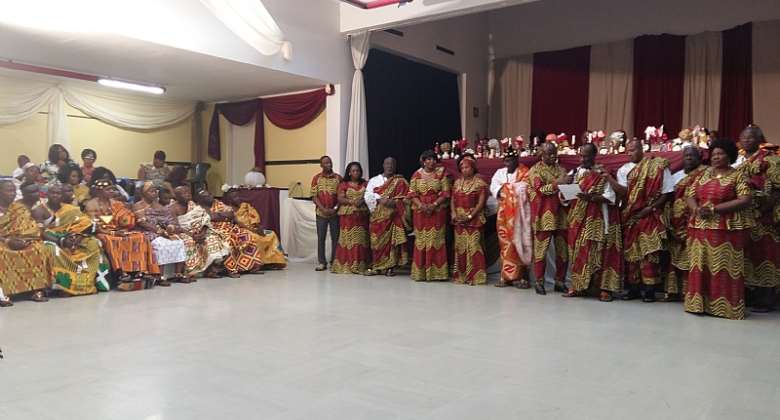 An Association of GaDangmes (natives from Greater Accra Region in Ghana) living in Brescia - Italy, has been inaugurated.

The event was marked with the folklore drumming and dancing provided by a ‘fully charged’ group from a related Association in the city Modena. They exhilarated the audience with the typical native dance of ‘kpaalogo’ – a trademark dance of the GaDangme people.

Formation of the Association was as a result of two natives of GaDangmes who incidentally met at a function and later interactions provided an idea of looking for other natives from the Region in Ghana residing in Brescia with the purpose of coming together to help their community, extend that cooperation further to other communities in the Greater Accra Region of Ghana and assisting with developmental projects. That took off well and it was great joy to outdoor itself with an outpouring goodwill messages and compliments. Executives of the Association were officially introduced to the gathering. Among them are: Samuel Sackey as Chairman, Michael Allotey (Secretary), Roger James Amarfio (Financial Secretary), Ebenezer Sackey (Organiser) and Francis Lawerh as Coordinator.

The function attracted other GaDangme Associations in various cities and other Ghanaians living in Italy. Present were chiefs representing GaDangmes in Modena - Nii Trebi Mensah (Macbeth) and Oblitei Oblitey from Verona who is also the National Chairman of GaDangme Associations in Italy. Another climax of the occasion was the majestic entry into the arena of the Brescia Ahenfo Chiefs (representing the Ashanti Region in Ghana) led by Nana Appiah Kubi. The pomp and pageantry before taking their seats was a showcase of the glittering Ghanaians traditional costumes and dances. The local dance was taken to another level by groups of GaDangme youths who entertained the audience with their brisk twists and turns energy-sapping dance.

Seated at the high table were George Kofi De Sousa who represented the Ghana Embassy in Italy, Victoria Quaye – Director of Nursery at the Korle Bu Teaching Hospital in Accra, Giulio Arsenio of BPER Bank in Italy whose contribution to the cause of the GaDangme Associations in Italy is enormous and Dr. Gianluigi Trianni - a member of a group of doctors (an NGO) in Italy. They have been to Ghana and carried out seminars in addition to assisting with healthcare at Korle Bu Teaching Hospital and Lekma Hospital at Teshie in Accra.

Kofi De Sousa was the Chairman of the event and in his remarks pointed out preparedness of the Embassy to help Ghanaians living in Italy with consular matters and other related issues. He advised, problems confronting them in such matters should reach the Embassy early enough for redress and urged every Ghanaian in Italy to register at the Mission for it to have comprehensive details about its citizens in the country.

The Association used the occasion to present awards to individuals and groups for their services to GaDangmes in Italy and in their Region in Ghana. Among them were: George Kofi De Sousa (Ghana Embassy Consular/Welfare Affair officer) for his Hard Work and Long Life Achievements, Rev. (Dr.) William Quaye of the Presbyterian Church in Ghana, for His Hospitality, Solange Taila Talafio of BPER Bank (Social Businesses Manager) was given an award for Her Efforts in Promoting Africans/Italians Relationship, Giulio Arsenio of BPER Bank was honoured for His Ability in Organising Inter Cultural Activities and Dr. Gianluigi Trianni received an award on behalf of MOXA (an NGO of doctors without borders) for their contribution to the GaDangme people in the Greater Accra Region in Ghana. The list of recipients also included the following: Seth Badu Tawiah (Municipal Chief Executive of Lekma Hospital) for His Assistance to the Council of GaDangmes Associations in Italy (COGAI), Pastor Samuel Sackey (Chairman – GaDangme Association in Brescia) for His Leadership and Initiative Qualities, Roger James Amarfio (Financial Secretary - GaDangme Association in Brescia) for His Hardworking Services, Mary Ackon (Member-Brescia Association) for Her Ability and Encouragement, Adzoa Serwah Addo (Member- Brescia Association) for Her Dedication to Service for the Association and Michael Allotey (Secretary – GaDangme Association in Brescia) for His Commitment and Hardwork.

The event was taken care of on the floor by Patience Kena and Titus Evans (a.k.a Bishop T) of Hot Digital Radio in London.

No one is above the law except the President - Oliver Barker...
33 minutes ago