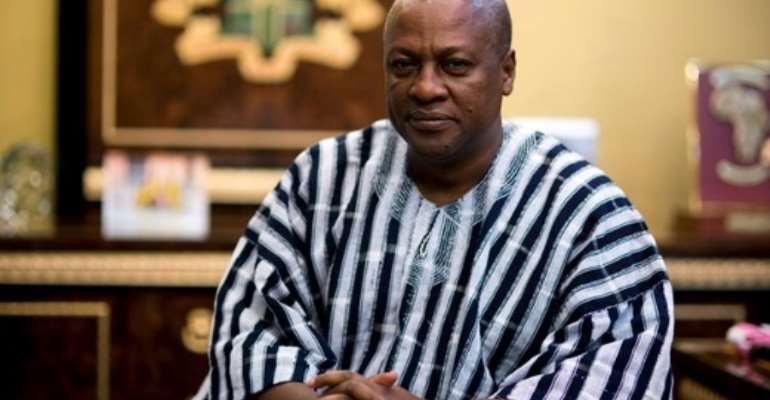 Isn’t it quite ironic that with all the harsh economic conditions, amid corruption allegations (Bus branding, SADA, SUBA, GYEEDA, Ford Expedition Vehicle, etc.), President Mahama can still go ahead and accuse his opponents of promising the electorates heaven during the 2016 electioneering campaign, which led to his humiliating defeat?

“Speaking at the World Economic Forum in Durban, South Africa on Thursday 4th May 2017, former President Mahama noted that he had an “incumbency disadvantage”.

Former President Mahama who was sharing some of the things that led to his loss in the 2016 elections added: “I had managed the economy and I knew what the economy could give the people and I told the people the truth that we need more hard work to be able to get out of where we are; my opponent promised heaven and you have the constraints of not being able to promise all the rosy things he was doing” (See: www.graphic.com.gh/politics). ›

It is somewhat heartrending to continue reading and listening to the baseless claims from the sore losers, given the economic hardships the same people wilfully imposed on the good people of Ghana.

Tell me, my dearest reader, if this is not a sheer political gimmickry, what would then drive a former president who presided over so much sleaze and corruptions which culminated in Ghana’s economic downslide to accuse his opponents of masterminding his humiliating election defeat?

I have always maintained that when the experienced politicians like former President Mahama keep holding on to vague rhetoric and political inebriations with a view to misinforming the unsuspecting public, it gives some of us the energy and reason to confute the apparent misconception.

With all due respect, former President Mahama must accept the fact that his woeful errors in judgement which sent Ghana’s economy deeply into the mire to some large extent, cost him the presidency.

Let us admit, despite the apparent economic downslide back then, President Mahama and his apologists kept trumpeting their vague rhetoric , political insobrieties and meaningless slogans-‘Mahama Tuaso’; ‘We care for you’; ‘people matter, you matter’; ‘we are transforming lives’.

Meanwhile the good people of Ghana were struggling to pay their utility bills and could not even afford their children school fees.

The discerning Ghanaians therefore decided to put their trust in NPP to set them free from the NDC government’s ostensive economic enslavement.

Rightly so, the good people of Ghana embraced NPP’s advantageous policies such as one district one factory, one constituency one million dollars, one village one dam, free SHS, tax deductions and many others.

If President Akufo-Addo and his government managed to fulfil all those promises, trust me, it would be an illustrative case of “heaven on earth”

Incredibly, whenever the suffering Ghanaians complained about the economic hardships, former President Mahama and his appointees would ungraciously chastise the same people who gave them the electoral mandate for expressing their grievances.

Believe it or not, the NDC’s ‘Babies with sharp teeth’ would insult every Ghanaian that would dare complain about their laissez faire style of leadership.

The discourteous NDC brats did not even spare their party founder, Rawlings, for voicing his opinion over the rampant sleaze and corruption in the NDC administration.

Yes, the ill-bred apologists kept castigating their founder, Rawlings, for expressing his arousing disgust over the rot in his party.

The NDC’s Babies with sharp teeth disgustingly abused the then flagbearer of the NPP Party and the current President Nana Akufo-Addo day in and day out.

The brats spewed all sort of lies about the eminent lawyer. The good people of Ghana somehow became fed-up with the needless abuse the uncouth NDC apologists were directing towards the unwearied Nana Akufo-Addo.

Ironically, back then, President Mahama claimed to be a humble leader, a very patient leader, a tolerant leader. Yet it was the same President Mahama who lividly told Dr Bawumiah, the NPP’s presidential running mate for 2016 general election and now the vice president of Ghana to shut up and cease criticising him (Mahama) because he (Bawumiah) had not been a president before.

Strangely, however, the much touted humble, patient and tolerant President Mahama was reported to have told the people of Ashanti Region that they are ungrateful and would never be appreciative even if all their roads are constructed with gold.

Again, the holier-than-thou President Mahama refer to Ashantis as useless lots who are incapable of pronouncing words that have letters ‘L and R. The people of Ashanti Region ineffaceably stencilled such unnecessary comment at the back of their minds and waited for an appropriate time to express their arousing disgust. Indeed, the right time was 7th December 2016.

On 7th December 2016, the good people of Ghana remembered the day when the humble, patient and tolerant President Mahama told them to cease their useless discussions over the suitable burial place of our departed former President Mills.

The good people of Ghana also recalled how the holier-than-thou President Mahama went about frolicking by giving needless epithet to the then flagbearer of the NPP Party and the current President Nana Akufo-Addo and the acting chairman of the NPP, Freddie Blay.

And what is more, whenever the good people of Ghana express their doubts over the much touted numerous infrastructural projects, the humble, patient and tolerant President Mahama and his vociferous communicators would reply: “It is only those that are blind that do not see the good work of the NDC government.”

As a matter of fact, the good people of Ghana stencilled the needless attacks on their mental sheets and waited for an opportune time to teach the clamorous NDC ‘Babies with sharp teeth’ a great lesson.

And, who said that 7th December 2016 was not the auspicious time for the good people of Ghana to vent their spleen on the disrespectful brats?