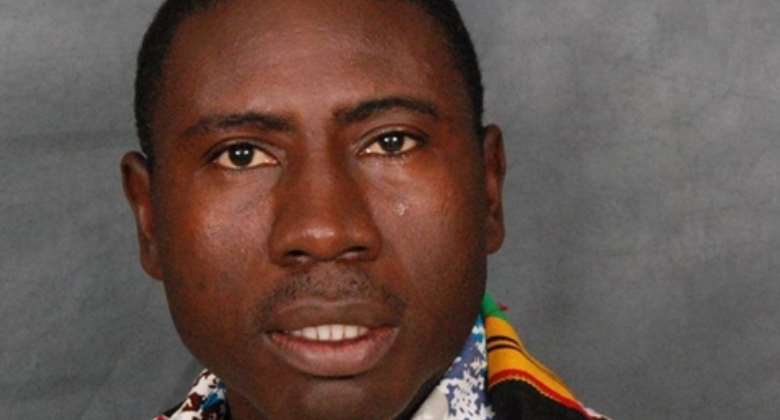 I could not publish last week. A small housefly thought me an annoying lesson. I don’t know where it came from, but this very persistent fly kept flying over my face, disrupting my attention from finishing my writing, and in my rage, I hit it hard against my keyboard, and gone, my laptop went blank. Every available document on that computer was gone. It will not even boot again, no amount of resuscitation could bring it back.

So Simpa Panyin observed helplessly as all the national issues flew on my face, the drama of the Ghana Revenue Authority, EOCO, and the Ibrahim Mahama’s untold 44 dud cheque story, all began to wag their tails at me, as I failed to register myself on the pages of the press.

But I am back today, just in time to make it to the end of the dying of all the issues that began, the installation of Nii Kweku Ablade Okogyeaman I, formerly President Nana Addo Dankwa Akufo-Addo... wow!

Just when I was about to complete the script for the day, I saw a release of the names of the President’s nominees for the various District and Municipal Assemblies. I would have loved to do a full piece on that, but it has come rather too late, so good night on that.

Anyway, I am happy; my former Financial and Cost Accounting Tutor, Mr. J. B. Ninson, has been nominated as the MCE of Effutu Municipal Assembly. That man made the learning of Accounting quite easy for my life. Of course Winneba Secondary School has always been the best business school in the country, and it is the likes of Mr. Ninson who helped to make deer great.

Today, in researching for this script, I read through some of the Auditor General’s reports on corruption at the District Assemblies, and, man, some of the things blew my mind. I will encourage you to read these reports, especially the ones on the District Assemblies. The levels of rot, the monumental naked robbery of the state resources; master, we are dying, trust me, we are.

In one instance, the Assembly is reported to have spent over GHC100, 000, to inspect a project which is only about a hundred meters away, about the length of a football pitch; and as I listened to Captain Smart, one Assembly spent over GHC800,000 on fuel alone. In that same report, one Coordinating Director is supposed to have travelled, from Kumasi to Accra, eleven times a day, every day of the week, throughout the year, do you get the point?

Anyway, let me get back to EOCO and GRA. I believe several senior management of EOCO and the GRA must be dismissed and prosecuted, immediately. We must not allow them to feel that their involvement in chasing Ibrahim Mahama, is sufficient in excusing them from responsibility.

Last week, the GRA asked Mr. Ibrahim Mahama, a brother of the former President, John Mahama, to clear his indebtedness to the Authority earlier than originally planned. According to the GRA, Mr. Mahama has consistently defaulted in the payment of his indebtedness, of over 16million, which should have been paid by December 2015.

How did these all happen? Certainly Ibrahim Mahama was not a law unto himself, so how did we watch him remained a law unto himself? And I understand EOCO has said if he fails to meet the set deadline, he will be sent to jail.

Well it is not even fair to prejudge him. How can you say he should pay up or go to jail? Are you finding him guilty already? That is all you have been doing, laziness, and in search of easy preys, to punish, to the pleasure of the government in power. Where were you (I mean EOCO as an institution) when all these were happening when President Mahama was in office? You are a leader of a supposedly independent public institution; would it have been that easy for you to have given this same directive if President John Mahama was still a President of Ghana?

Papa Kwesi Nduom’s PPP was one of the few political parties that had filed their financial accounts with the Electoral Commission; Papa Kwesi Nduom was one of only a few Presidential Candidates that had publicly declared their tax returns. Yet, when it suits your political whims, you were chasing him, to look into how he was financing his 2016 campaign.

While EOCO was on such a vindictive tangent, Ibrahim Mahama is reported to have issued 44 dud cheques to no less a state institution than GRA; Justice Tsar, your were the Executive Director of EOCO, but you saw nothing wrong with that, and Mr George Blankson of the GRA too saw nothing wrong with that, because Ibrahim Mahama is the brother of the president; if there had not been a change in government, this might never have come up, the cheques would have remained dead, correct?

You see, cowards, you are not worth your positions. You all look like corrupt thieves, unworthy of being called public servants. We sit in this country, and all you do is telling us how much you have achieved your revenue collection targets, but you fail to tell us what you missed, what you stole into your own pockets, the deals that you arrived at that deprived the country of the needed revenue sources, and all the likes of the 44 dud cheques issued by political patrons, and you call yourself tax expert? You are not even ashamed to call yourself a tax man?

In year 2010, the same GRA reportedly gave Subah GHC144million for no work done; we just went into the consolidated fund, looked into the eyes of our malnourished and dying children, and we gave millions to a company that had done nothing for us. We again passed by the Korle Bu Maternity ward, saw so many pregnant women who could not afford to be delivered of their babies, and yet we gave GHC51million Cedis to Woyome for no work done, what kind of country is this, my brother?

We chase after struggling poor market women, to take taxes from them, look at how we harass taxi drivers, to take taxes from them, and we use that money to feed the children of the rich, as we leave the big money makers to keep all of their loots to themselves, and we call ourselves religious people, Muslims, Assemblies of God, Methodists, Presbyterians, and all the big crosses dangling on our chest, with white shirts, and with filthy hearts, rotten minds, thievery, wickedness, all filling our souls; my brother, one day, the poor will rise, and that day, I have said it before, that all those who became rich by stealing, by thinking that they were being smart in cheating the system, that day, the rich will fall, trust me.

Mr. K. K. Amoah, today you are the person in charge of EOCO, and you are doing the bidding of the President. That is the way to go, let the law work; but also make sure that the law works equally and fairly. Don’t go after Ibrahim Mahama, and leave out the President’s patrons. Don’t go after defenseless citizens, to show that you are working, and leave out those who are close to the corridors of power. Remember that real power resides in the people; today you are where you are, tomorrow you are gone, but Ghana remains Ghana.

When you are free, go to any of the hospitals, and see the pregnant women queuing to give birth. When you see them, don’t think they are poor; you made them poor. I know you don’t care, because your wife will have your babies in plush hospitals, possibly in foreign countries. You don’t care because your children will be given the scholarships that are meant for the poor.

Still when you have a little time to spare, please pass through Makola, visit the families of the June 3 disaster, go to communities in Jirapa, go to your own boss’ hometown, Bole, observe the poverty you have helped to create, ask them of how many children died of malnutrition when you were a Commissioner, ask them how many children died of malaria, look at the rate of school drop out there, and when you are done, congratulate yourself, for creating poverty to enrich yourself, you will not die, you will live...