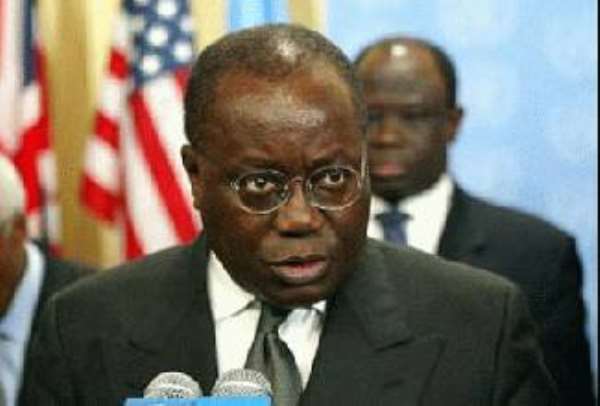 In recent times, miracles and prophetic teachings have inundated Christianity in Ghana. Over reliance of prophesies and prosperity messages had not only plunged many citizens, including clergymen, into a state of befuddlement, but also risk setting the expectations of believers on God very high (practical definition of laziness). As Martin Luther King Jr observed: “The belief that God will do everything for man is as untenable as the belief that man can do everything for himself. It, too, is based on a lack of faith. We must learn that to expect God to do everything while we do nothing is not faith but superstition.”

When I watched and read about President Akufu-Addo and his “horn of strength” presented to him by Bishop Isaac Owusu Bempah, I was amazed, ambivalent and retorted that Nana has joined the bandwagon of prophesy-driven faith warriors. However, my joy knew no bounds when I read that President Nana Addo Dankwa Akufo-Addo has entreated church leaders to impress upon their members to be hard working and desist from over reliance on miracles for success. Mr. President reportedly stated: “These days, we are in danger of getting things out of balance and allowing our lives to be taken over completely by a narrow interpretation of religion. Hard work, cleanliness and respect for the law used to be important attributes of religiosity. Hard work, the preacher men used to tell us, pays dividends,” (Sources: ghanaweb.com, March 27, 2017). Therefore, I have resolved to reflect on Christian religious activities in Ghana.

Without further ado, the French social psychologist and sociologist, David Emile Durkheim (1858-1917) classified human society into two namely: profane and sacred. In the view of Durkheim, religion belongs to the sacred part of society (Eriksen, 2015). Durkheim also intimated that the role of religion in primitive societies consisted of setting up solidarity and social cohesion through rituals and collective representation. Durkheim argued in his elementary forms of religious life that religion entails society’s worship of itself (Eriksen, 2015).

An American anthropologist, Clifford James Geertz (1926-2006) perceived religion as a component of cultural system. He thinks religion is a system of symbols which acts to create powerful, pervasive, and long-lasting moods and motivations in men by formulating conceptions of a general order of existence and clothing these conceptions with such an aura of factuality that the moods and motivation appear uniquely realistic (Eriksen, 2015). The word culture is derived from the Latin “colere” meaning to cultivate. Culture simply implies unnatural aspect of human existence.

If religion is a sort of cultural system, then is the current religious activity in Ghana part of our culture? Is it realistic? To a very large extent, waiting for miracles before actions is far from reality. The same Bible that the Catholic Church of Ghana, Presbyterian Church of Ghana, Seventh Day Adventist Church, Methodist Church and other applicable churches used to establish high class secondary schools and hospitals in Ghana has turned modern churches into theatres of big crusades and prophetic healings. There is nothing wrong to expect miracle from our maker. In my opinion, what is wrong is an attempt to make miracle a condition of livelihood. “Three times I pleaded with the Lord to take it away from me. But he said to me, ‘My grace is sufficient for you, for my power is made perfect in weakness.’ Therefore I will boast all the more gladly about my weaknesses, so that Christ’s power may rest on me” (2 Corinthians 12: 8-9, NIV).

We are in the era of grace. Did bible say my prophet/bishop is sufficient? “Then I will give you shepherds after my own heart, who will lead you with knowledge and understanding” (Jeremiah 3:15, NIV). This message of prophet Jeremiah preceded the time of Jesus. Jesus gave us another perspective of acquiring knowledge and understanding: “And I will ask the Father, and he will give you another advocate to help you and be with you forever the Spirit of truth. The world cannot accept him, because it neither sees him nor knows him. But you know him, for he lives with you and will be[ a ] in you (John 14: 15-17). I am not insinuating that pastors have outlived their usefulness with coming of the Holy Spirit. Oh big no! My point is the role of pastors must not be reduced to miracles and prophesies and that men of God must not be God of men.

The role of a pastor is spelt out in Nehemiah 8: 8, “They read from the Book of the Law of God and clearly explained the meaning of what was being read, helping the people understand each passage” (NLT). This means that pastors must be properly trained before they could understand and interpret what they are teaching their clients. The Western World which brought religion to us train their pastors. Mr. President, do not just task the religious leaders but also consult the various stakeholders and close down many churches. People who operate churches must at least successfully complete High School and must mentor a trained theologian. Certificate of mentorship must be a condition for pastoring a church. Like teachers, pastors are inseparable agents of socialization and the citizens must be concerned with the training of pastors. Some churches need a closure. In Cameroon for example, President Paul Biya ordered the closure of nearly 100 Christian churches in key cities, citing criminal practices organized by Pentecostal pastors that threaten the security of the West African nation.

I struggle to fathom why a nation will spend huge amount of resources to educate the citizens while some people simultaneously pollute these citizens under the pretext of pastoring them. Innocent and vulnerable Church members suffer from all sort of abuse. Many of these pastors capitalize on the ignorance of their members to peddle some moral turpitudes. The following video by an ex -junior pastor reveals abuse of women including married women. https://www.youtube.com/watch?v=ouB9XWBFBFE

In April, 2013, the doyen of investigative journalism in Ghana, Anas Aremeyaw Anas, through his “Messiah of Mentukwa” undercover studies revealed to us how prophets or prophetess compel under age individuals to marry in the name of religion at the camp of Mentukwa.

Religion is a very significant component of human lives. The foregoing unsavory happenings could compel some victims to question the very God they are expected to revere. This reminds me of theodicy concept in the philosophy of religion. In religion, theodicy is a branch of philosophy that attempts to reconcile the belief in a God that is benevolent, omniscient, and omnipotent with the existence of evil and suffering. The concept recognizes that God is able to end evil and that evil exists, and tries to understand why God has not ended it. This is somewhat similar to logical problem of evil espoused by Epicurus (341BC- 270BC). In the view of Epicurus, if God for example wishes to prevent evil and is not able to, then God is feeble. Also, If God is able to end evil but does not want to, and punishes man on the grounds of evil, then God is vicious and vindictive. If God does not wish to end evil and is not able to cancel evil, then God is vicious and feeble.

When false prophets deceived believers this is how they think. Be sincere to yourself when you face crisis you also question God. For example, when the news of the death of my roommate at Cape Coast University, Ameyaw Hayford,(R.I.P Yaw, wherever you are) got to me, I spontaneously shouted and made this statement with a senseless and irresponsible glee: “ God I declare today you are fake” You see ooh! What an interesting scene to behold! I ask for forgiveness God. You will probably agree with Alfred Adler (1870-1937) that the only normal people you know are those you do not know well.

St. Thomas Aquinas, responded to the problem of evil by stating that it is not clear whether or not the absence of evil would make the world a better place, because, without evil, there would be no meaning to kindness, justice, fairness, or self-sacrifice. My simple message to prosperity, prophesy and miracle preachers is that if all humans become rich the world will be rid of significance of riches. It would have been very difficult to live on earth. Churches must indeed preach against laziness. Once again, Thank you Mr. President for observing the diluted Christian values in Ghana. We need a religious renaissance in Ghana. God Bless Our Homeland Ghana.

Election 2020: You'll have ‘fugitive’ president should Maham...
49 minutes ago