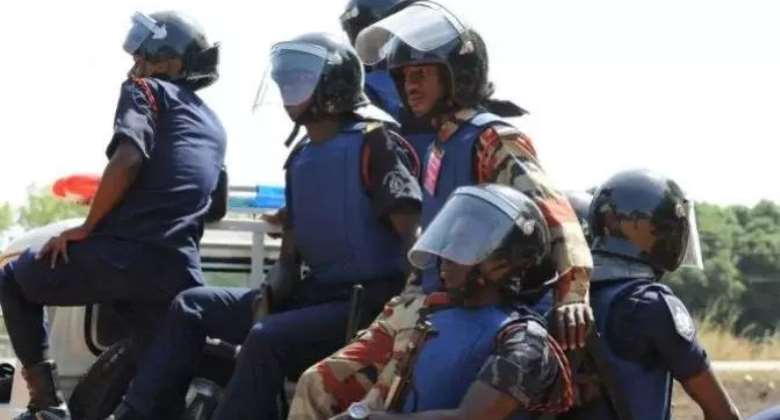 The GHANA Police Service has been in the news for some time. The evil agenda and machinations of previous government nearly turned the institution into a “yoyo” by dancing to the tune of music being played by the government of the day. But what is happening at the Kwabeng Division of the Ghana Police Service in the Atiwa Division has no political colorization. It is bizarre to talk about. It is pure inanity and breach of police rules and regulations regarding arrest of suspect.

Where under our Constitution will the Police dress a civilian in borrowed robes (police uniform and armed with a gun to lead a detachment of police personnel, including the Commander to arrest some so called criminals?

But that was exactly what happened at Akrofufu also in the Atiwa District there the police dressed a civilian called Alhaji to arrest Kwadwo Mike and Kenneth Adarkwa for allegedly dealing in wee and cocaine.

The story has it that Kenneth Adarkwa’s cow got missing a little over a year ago. It was traced to the residence of the police “constable” , Alhaji at Akrofufu. Now, the “Police Constable” Alhaji was a friend to Kenneth Adarkwa, and so after giving him some beatings they let him off and the cow was restored to its rightful owner. “

“Constable” Alhaji left the town only to resurface a year later, but this time as a Police “Constable”. Wonders, they say, will never end. He made the Roman Catholic Basic School at Akrofufu his place of abode.

On the third day after his return to Akrofufu, the house where the suspects were residing witnessed a commando like assault on it. At about 12.30 am, the occupants heard loud banging on the gate/door. On enquiry, the noise at the other end responded that it was the Police and ordered them to open the gate otherwise they would curse the day on which they were born. The poor helpless and defenceless occupants could do nothing but obey.

When the door was opened, they were shocked to see their old friend, Alhaji in a police uniform with a gun to match. He was accompanied by some policemen led by the Officer in charge of the District. “Constable” Alhaji pointed at the rooms where his former (now estranged) friends were occupying. Kenneth Adarkwa was asleep, but the Police handcuffed him before waking him up. His room was searched but no incriminating evidence was found. They even poured out his soup from the pot but the search yielded no positive result.

Next was Kwadwo Mike’s room. They did not find anything incriminating in the room. He too was handcuffed. On their way out of the house, “constable: Alhaji picked up something wrapped in a black polythene bag from the floor. He had on him a shocking device which he applied on the two suspect s to make them “talk”, but they denied knowledge of the “exhibit”.

A third suspect was also picked up. At the time of his arrest, he was totally drunk and being fed by his wife. In the process, he started vomiting. “Constable” Alhaji gave the wife a slap and the latter retaliated. The three of them were put in a police van and driven to Kwabeng Police Station.

Initially, the case was heard at the Kwabeng Magistrate Court where the suspects were remanded in police custody for two weeks. A week after they had been remanded, the Commander of the Unit told the lawyer to the accused that he was taking the case to Mpraeso for hearing and asked the relatives of the suspects to provide a vehicle to convey them to the place. The family provided a taxi cab and went to Mpraeso to await the arrival of the Police and the suspects. Their lawyer also went there, but the Police did not show up.

That same evening, the Police at Kwabeng brought a confessional statement for the suspects to sign, but they refused and told the police they would not sign any document in the absence of their lawyer. The nest day, they were sent to Koforidua High Court. He charge against them was that they were in possession of 11 rolls of wee and 2 rubbers of cocaine. The court refuse to admit the “exhibit” in evidence and the police conveyed the suspects and their “exhibit” back to Kwabeng.

The following day, the Kwabeng Police asked the family of the accused to hire a vehicle to convey the suspects and the officer handling the case to court in Koforidua. This the family did at a cost of GHC150.00. In court, the IPO gave the time of arrest as 9.30am instead of 12.30am. They were granted bail by the Presiding Judge. The case comes up for further hearing on Tuesday, 28th March, 2017.

Now, I have many posers for the Divisional Police Command at Kwabeng and the masses in the country. Since when has it been the practice to dress a civilian in Police uniform to arrest a so-called suspect? What about the gun given to him. What was he to do with it? Were they not preparing the stage for something tragic since the civilian might not be conversant with the use of the gun? Was the gun a toy one or real? And going by the antecedent, were they not creating an avenue for “Constable” Alhaji to pay his “tormentors” back in their own coin? Again, is it a normal practice for the police to go with their informant when they go on such operations?

Did the Police have a search warrant when they intruded on the privacy of the suspects and subjected the entire household to psychological torture at such an odd hour of the night? Was the time of the operation recorded in the Police Diary Book?

Another mind-bugging issue is that if the Police go on such a special operation like the one being described here, don’t the search the vicinity of the entire house before going into the individual rooms to conduct further searches. They might send some men to conduct searches in rooms while the search in the main building is going on. But it is unusual to find exhibits at places which have already been searched. The fact that the “exhibits” were found when they were about to leave the house leaves much to be desired. The Police should provide further and better particulars otherwise they should bow their heads in shame.

Again, did the Police demand money from relatives of the suspects after their arrest had been effected? Again, why did the Divisional Police Commander go on air to announce with glee (PeaceFM) that the cocaine kingpins who had subjected citizens of the area to untold hardship, when the case was yet to be decided at the court? If I may ask, is it the normal police practice for the family of suspect to provide vehicle to convey suspects/accused to court for hearing? What happens to the vehicle at the Station?

The above and many mind-bugging questions are waiting for answers which the Police Administration under the current IGP must do well to unravel.

Mr. IGP, you must do well to find out why the Kwabeng Divisional Police should allow a civilian to be dressed in Police uniform? What was the motive behind the action?

I pause for an urgent response!!
Calls twice to the Divisional Police Officer went unanswered.