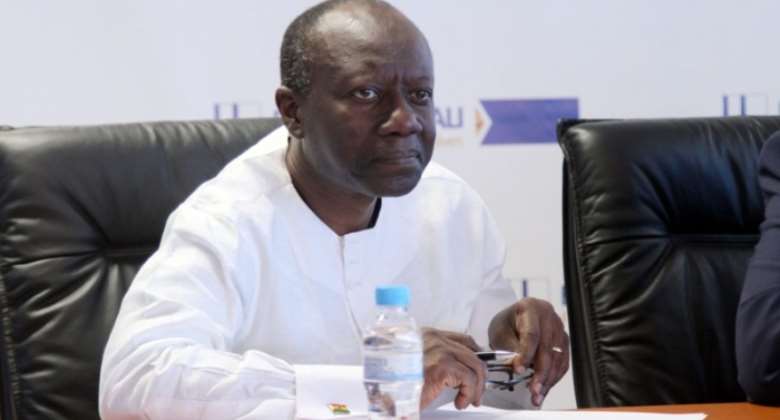 Ken Ofori- Attah is not a small man. He is an economist and a co- founder of Databank. He is used to budgeting and he knows a budget is not more than an organization's expected revenue and a detailed proposal of what the organization intends to spend the expected revenue in a specific period.

Ken Ofori- Attah had the burden of delivering a budget that was unusual to him. A politician had opened his mouth too wide to promise the people heaven and earth to outdo his opponent in an election. It was the politician's last best chance to clinch power in fulfillment of his lifetime dream.

The politician had promised among all other things a free SHS and a reduction of taxes. This is unusual with economic best practices.

You are either reducing taxes for the people to have relief in their daily economic lives or you tax them to provide some social benefits for them. It is not normal for a government to promise a significant reduction of taxes and at the same time to promise the people an increase in welfare benefits.

The experienced economist knows that. Like me, he has become bored with the usual at Databank and he desires for a new challenge to bring some new excitement into his life.

He takes the offer for a minister of finance job knowing how daunting it would be. He goes away somewhere with some economic' gurus' to fashion a budget for his government. He wracks his brain and realized it would be difficult to come out with a budget that would satisfy the public's desire to see the president's promises fulfilled; especially when it comes to the matters relating to the reduction of taxes and providing the promised FREE SHS in the same budget.

He went to tell his master that the job is difficult. It is not possible to deliver all the President's promises in the first budget. Cabinet couldn't accept this from him. Someone suggested the use of the ' heritage fund' for the free SHS. Another raised the point that Ghanaians would not accept that proposal. In the end , there was a decision to leak this thought to the public to test how the people would receive it.

The next morning we saw on social media that government intended to use the ' heritage fund ' to fund the free SHS policy. The public was unanimous in rejecting that idea at birth.

Government is in a fix. It has run out of ideas on how to prosecute his free SHS policy come September 2017. But the budget must be read. Ken was asked to try and present something to the people.

Ken was told to try to at least reduce some taxes for the people to see that the government intended to fulfill its promises to the people. Ken went back to wrack his brains.

But nothing much came out. On March 2nd 2017, he delivered something to the people. His utterances in reading the budget was largely characterized by 'we would......' . He sounded not certain about what his government intended to do in the budget.

He managed to make some people happy. The government intends to reduce taxes on imports of 'spare parts'. Although, ' Kayayes' do not by law pay taxes to central government, he told the people that taxes payed by 'kayayes' have been abolished. Maybe, he meant District Assemblies and the Metropolitan Assemblies daily levies on 'Kayayes' had been abolished.

Ken mentioned that Vat NHIL on financial services and other locally produced goods had been abolished.

This only means that government is doing away with a source of fund for the Health Insurance scheme . Already, the NHIS is collapsing for lack of funds to pay service providers.

Government was silent on where it would get money to finance the free SHS next September. I bet the NPP MPs in parliament don't have a clue about it.

But one thing is certain. The NPP would implement the free SHS come September. You know all our educational institutions are now fitted with pre- payed meters.

The Databank man is a worried man. But Ken has been assured that everything would be fine. He has been told that some 'juju man' from Dahome- Benin is arriving at the Flagstaff House to remove the difficulties in the budget. Even if it comes to the worse, the ' juju man' had promised to conjure some money enough to finance the free SHS.

Ken Ofori - Attah is himself skeptical about the 'jujuman's' trick in helping to deliver his budget.

But what can he do than to trust in the ' vodoo' man's powers to deliver. In any case, he has also been assured that even if the Dahome ' juju man' could not deliver, NPP would call 'God's juju men' : ( pastors, seers and prophets) in here to help in seeking the face of God in delivering the budget.