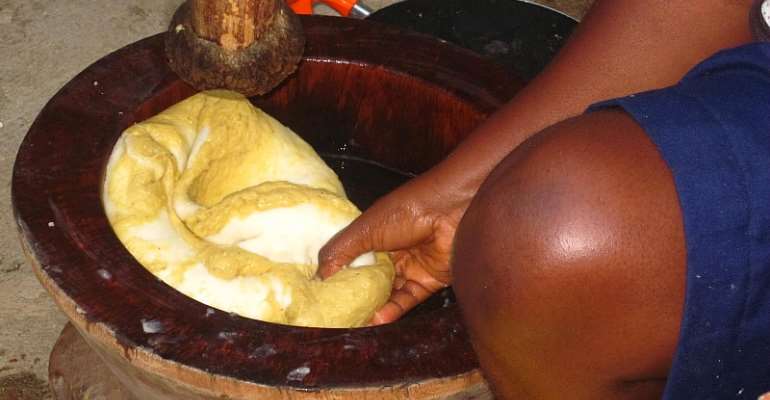 Since the Man of God, Pastor Mensah Otabil, made his pronouncement about the ill-effects of eating fufu, the media has known no peace. For some weeks now it is fufu this, fufu that, and fufu, fufu on the news ad nauseum. Fufu has gained a grandstand media attention and has perhaps reached number one spot as the most searched word or most trending and streaming word in Ghana. Fufu’s popularity as the most cherished Ghanaian dish is incontestable and it is sad indeed that the Man of God chose a delicate topic to pontificate on without confining himself to theological and eschatological admonitions.

What is fufu? Fufu is a kind of starchy carbohydrate food eaten with the fingers, and with different soups. It is made from sources such as cassava (manihot utilissima), plantain (musa paradisiaca/plantaginaceae), cocoyam (xanthosoma/colocasia esculenta), and yam (dioscorea alata/oxalis tuberosa). It is a delicacy in the West African countries which are to the forested areas to the south of West Africa in countries such as Ghana, Nigeria, Togo, Ivory Coast, and Benin, among others.

Because of trading, travelling and inter-mingling, people in the Sahel zone to the north have also caught up with eating fufu. All the ingredients earlier mentioned above are peeled, boiled, and pounded in large wooden mortars with wooden pestles. The pounding is a tough and demanding exercise which puts off many people from eating fufu because they cannot put up with the strenuous physical exercise of pounding it.

Some Akwapim people of Ghana prefer only cocoyam fufu while Akyems and Ashantis prefer fufu made from a mixture of cassava and plantain, with the plantain preferably the type of big species called locally as ‘Apentu’. The Krobos of the Eastern Region of Ghana are very hardworking farmers. They cherish fufu so much so that stale fufu which has stayed more than a day is still eaten by warming it in palm-nut soup. It is locally referred to as fufu nkusa/nkisa which other tribes normally throw away. Cultures differ a lot. Fufu is swallowed, not chewed so the softer it is pounded into soft fluffy and yummy stuff, the better it is on the tummy, to make it yummy-tummy. However, some people like their fufu hard.

There is a proverb which goes that if you always hear the ‘dum dum’ sound of the pestle from your neighbour’s compound, do not envy them as being well-off to be eating fufu every day. It could be that they only pound the worst kind of cassava called Epo Bankye or Bankye Akyenabo (poor people are associated with it because these are wild-growing cassava which are scavenged and salvaged from the forest).

The Ashantis and Akyems like their fufu with a lot of plantain while Fantes on the contrary prefer more cassava with little plantain as they are primarily fisher-folks. There are those in Yorubaland, Beninland, and Iboland in Nigeria who only know fufu as pounded yam with bitter-leaf soup or with pepper-soup or with ogbono soup, crayfish and dry pwanla or dry fish. When fufu is mixed with cassava at the stage of pounding, it reminds one of the yellow and white of boiled egg which is made up of the outer whiter albumen and the inner yellow yolk

Fufu is a mysterious and awe-inspiring food which has many connotations to it in sociology, economics, culture, home politics, and home economics, among many other fields of study. Fufu-eating is a unifying factor as many gossips, pleasantries, and even love hunting are found at fufu eating restaurants or chop bars. In the ministries in Accra, many men and women troop out in their numbers to fufu chop bars at lunch hour to have their lunch of hot-steaming protein-loaded soups with fufu at popular places such as Asanka K3se3 near the Central Post Office in Accra.

This writer once found his Ashanti lover at a fufu-eating place in Ikeja, Lagos in the late 80s when he was not married, and he had been chaste at the time for six good years. A typical fufu-eating scenario in rural Ghana will find many children in the household around a huge Asanka or earthenware bowl, dipping their fingers into the bowl of fufu and soup, struggling to take portions. It is survival of the fittest and a communal eating style which unites and bonds them. However, young ones may not have their fill as the bigger siblings out-eat them with their bigger morsels.

This essay will look at aspects of fufu eating from the point of view of fufulogy, fufutomy, fufumatics, fufu-dynamics, fufu-politics, fufu-nationalism, fufunomics, fufusophy, fufu-semantics, and fufumetry. Fufulogy is the systematic study of everything about fufu. Fufutomy is the study of the anatomy of fufu to see its composition. Fufumatics is the effect of fufu on love as fufu can be a love potion given by women to their husbands to spoil them and turn their heads. After all, it is said that the way to a man’s heart is through his tummy, and the Ghanaian women know that too well.

Fufu-dynamics/mechanics is the physics involved in the piston action of fufu pounding with the man driving the pestle up and down, targeting the centre of the mortar on the one hand, and the deft and dexterous hand movements of the woman driving the fufu in the mortar and dodging the hammering pestle on the other hand. In fact, pounding fufu is pure art and it is analogous to the sexual act. Fufu preparation between lovers can be the prelude to love-making as well as showing the levels of commitment lovers have for each other.

Besides, it is a healthy exercise any day, judging from our sedentary lifestyles these days. So many years ago, we heard that a fufu mixing machine had been invented by a science student at the Kwame Nkrumah University of Science and Technology (KNUST). That became a nine day wonder or a flash in the pan as nothing came out of it and Ghanaians still prefer the traditional method of fufu preparation, using the pestle and the mortar. This must be a deep cultural issue.

Fufu-politics comes about when the wife refuses to prepare fufu for his man which can drive the man to other women and chop bars where he can whet his appetite, if he is an ardent fufu addict. The action of the woman refusing to perform part of her conjugal duty of preparing fufu for her man, can lead to her being summoned before the elders, and if the case is not handled well, it can end up in wife battering, fisticuffs, and sour relationship, and at worse, divorce. Fufu domestic politics can cause the Women and Juvenile Unit (WAJU) of the Ghana Police Force to record many cases of wife battering. Hmmm, Fufu domestic politics for you.

Fufu-nationalism is found in the unifying factor of fufu chop bars which serve as magnets to draw fufu lovers from all walks of life to converge without discrimination.

Some people from northern Ghana call fufu ‘sokol3’, and when these northerners come to fufu-eating areas in the south, fufu entices them to stay on to work in various fields, especially on the cocoa farms as farm hands or labourers. Many end up integrating and marrying southerners for the love of fufu, thereby building strong bonds of national unity. Fufu love is as strong and elastic as the stuff itself. Without fufu, many marriages will be on the rocks.

Fufunomics is the economics of fufu whereby the fufu soup can be preserved and eaten for say three days or more if kept in the fridge. Fufu is nourishing and filling such that after eating it with protein-rich soup, you wish for nothing else to eat thereby it helps you to save your money. It is indeed very economical to make a big pot of soup which can be used for eating other things later on such as rice (oryza sativa), banku (from zea mays), gari, ampesi, among others. There is a saying that to afford a big pot of soup (ob3 nla in Yoruba), it will depend on how deep your pocket is because the soup comes with a mixture of meats, fish, condiments, vegetables, and spices.

The soups come in different versions such as light soup or pepper soup, groundnut (arachis hypogea) soup, palm-nut (eleais guineensis) soup, akatewa soup, kontomire soup, ogbono soup, and apia or dawadawa (parkia biglobosa/locust bean) soup, among others. The Akan name for soup is Nkwan which means life. So soup is life as Akan soups are nutritious and life–sustaining because they are richly and carefully prepared. Women take their time to prepare such soups so their men are forced to go out to drink to kill time while their wives are experimenting with their culinary prowess on different cuisines.

Fufu is often served in a large earthenware bowl called Asanka with the soup served on top of it. It reminds one of an island surrounded by water in geography lessons. It is so inviting that some guys go deaf when they are making sad mistakes among the dishes and they go out of coverage area. In the rural areas, fufu is eaten by all the children in the family together in communal eating which this writer did not experience despite having as many as 13 siblings. This was because his late mother made sure each child was given their portion in a separate bowl. Perhaps, that was healthier but it did not promote communal bonding usually found among Akan farming communities. Perhaps, the writer is a Fante/Effutu.

Fufumetry is the study of the size of fufu morsel you cut with your fingers and as a cheating child you hid that snail or chunk of meat under the kontomwa or trowa/troma or bolus in order to outdo others. Of course, the elder children serve as umpires whilst eating with you, and they will catch and sanction you. The fufu bolus can be eased in its passage down the gullet or trachea by some slimy okra in the soup which will precipitate peristalsis for the food to get down the belly for enzymes and hydrochloric acid and the pancreatic secretion to break it down in metabolism for extraction by the capillary hair muscles in the colon. There is an Akan proverb, “Abofra twa trowa a 3b3ko no anomu” Translated, it means a child should cut a morsel/bolus that it can swallow. It is also said that the child who knows how to wash his hands properly will be invited to sup with elders.

Email: [email protected]
To be continued.
(The author is Head of Research at ZCAS University, a member of the Oxford Round Table and also a member of the Economic Association of Zambia)