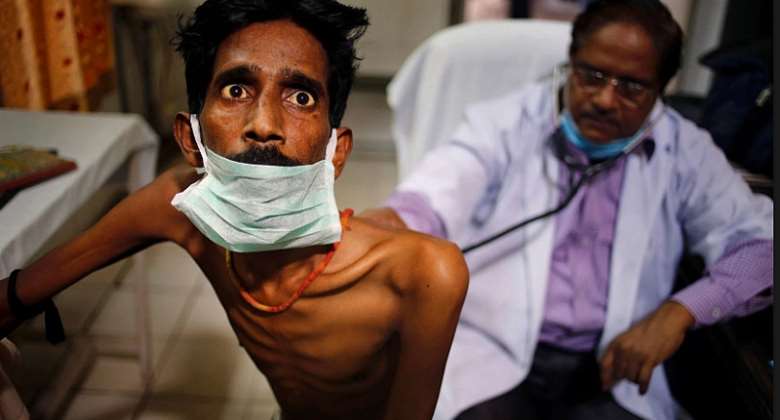 (To mark International Women's Day 2017, CNS presents an exclusive story of courage and inspirtion, based upon an interview with TB survivor and activist Prabha Mahesh)

"I can never forget that day. It is etched in my mind forever. I came back from the laboratory totally devastated and in tears. I had never ever thought even in the wildest of my dreams that a person like me could contract TB. But that was what my reports confirmed.

I was so distraught that I asked my younger sister to promise to take care of my then 1 year old baby daughter in case I died (which I thought I would)", reminisced Prabha Mahesh, while narrating her traumatic brush with a disease that globally infects more than 10.4 million people and kills 1.8 million of them in a year.

Prabha, who holds a Masters degree in Psychiatry and Social Work, was working as a superintendent in a government home for mentally challenged children in Mumbai when she was diagnosed with extra pulmonary TB (ETB) 17 years ago. It all began with a swelling in her neck, which she ignored for sometime. But slowly it became a huge lump. Her family physician initially put her on antibiotics but her condition did not improve. After undergoing various investigations, she was eventually diagnosed with ETB.

“I had no clue about going to the public health setup. So I sought treatment in the private sector. Surviving through that 1 year period of medication was a trauma. The first shock was that I was told by my doctor that I had to stay away from my baby till I completed my treatment. Also there was no structured way for me to take observed doses of medicines (like it is in the public health system). I must have popped up some drug twice, and omitted another altogether at times, for all that I know. More than the disease, I dreaded the separation from my baby. TB deprived me of my motherhood for one whole year and shattered me mentally. The only drive that kept me going was my baby - I had to live for her and hence complete my treatment. I am a strict vegetarian, but the doctor said I must consume eggs. It was a difficult fight within myself, but I ate them for the sake of my child. I did everything I was told to do to get cured just because of my baby” said Prabha to CNS (Citizen News Service).

DISCRIMINATION AND SELF STIGMA
Prabha feels that there was, and still is, a lot of stigma attached with TB. Her treating doctor himself advised her repeatedly to keep her disease a secret from her friends and colleagues. So she just kept quiet and did not tell anyone. But when she submitted a medical certificate for leave, her colleagues came to know that she was suffering from TB. Till then Prabha had thought that her co workers were fairly sensitized people. But it was not so for TB. “They started avoiding my company and would not have lunch with me. This segregation at my workplace made me so distraught that for a few days I did not eat my medicines”.

But Prabha was one of the few fortunate women to have a lot of family support. “My husband, parents and siblings all stood by me throughout those difficult times. My husband was a great support. He would segregate my medicines and staple together the required dosage to be taken at a time, so that I did not over or under eat any medicine. Family support is very crucial, because then you can damn the world. If the family’s psychological support is not there, no amount of outside support can help. Adherence is the key word and it is the family who can take the patient to complete the treatment journey. I was a psychologist; yet none of my coping mechanisms worked. Just imagine the plight of those patients who have no treatment literacy and other support”, she said.

For many years, even after being cured, Prabha did not share with others that she had suffered from TB. It was only about 12 years ago that she came out openly about her status. She credits this to a patient in a Mumbai slum whose remarks provoked her to share her story in an open forum. When she counselled Ramabai, who was interrupting her TB treatment all the time, on treatment adherence, she retorted: 'It is so easy for you to counsel me. If only you had gone through all this yourself and had had a taste of the medicines I have to eat everyday, you would never give me all this advice'. Ramabai’s remarks really woke Prabha up. On an impulse she told Ramabai: "What if I told you that I too have suffered what you are suffering today?" She then promptly called a patients’ meeting where she openly declared her status of being a TB survivor. Now they identified her as one of them and she found herself in a better position to be able to mobilize groups of TB patients to do peer counselling. That was Prabha’s first baby step to overcome her own self stigma and there has been no looking back for her since then.

COUNSELLING AND TREATMENT LITERACY
TB has taught Prabha many things. For her, it is just not about having the disease or about taking medicines. It is also about treatment literacy and about dealing with the psycho-social issues that come with TB, especially in the case of women. “Men can get some kind of peer support at home, at their workplace, or in their social circle. But it is a different ballgame for women. Traditionally no one cares about what she eats (or not eat) at home. Nobody cares how important nutrition is for her, how important her mental well-being is to fight the disease and complete treatment. I have come across many women TB patients who have alcoholic husbands and insensitive family members who act as stumbling blocks in their treatment path.”

Along with stigma and discrimination, treatment noncompliance remains a huge problem till today, and according to Prabha no amount of technology (sending them voice mails, messages, etc) can substitute the human element - a person actually sitting down with the patient and offering psychological support. “If I could interrupt treatment for a couple of days, despite all the family support and education I had, what to talk of others. As a TB advocate, I try to provide emotional strength to the patients and their families. The role of counsellors should not be undermined in our programmes, even as we give more importance to data, research, and documentation. We also need more TB support groups comprising cured TB patients. There must be strong incentives for them to act as peer support to others.”

“Today I am shocked that instead of giving me the confidence of dealing with my disease, my doctor kept on brainstorming me that I should keep my disease as private as possible. Also, despite having ETB, which is not infectious, he asked me to keep away from my daughter. She stayed with my parents for one long year . I suffered all this injustice because I did not have any proper knowledge about TB. Only if my doctor had counselled me properly, I would not have faced this mental trauma.”

But Prabha has come a long way. Her daughter who is now 18 years of age, actually encouraged her to become a TB ambassador with the International Union Against Tuberculosis and Lung Disease (The Union). “Now I talk openly about my past disease in open forums as a TB advocate. I am a master trainer for TB advocates. I do not have to rehearse or prepare a presentation as I speak from personal experience. I encourage cured TB patients to come to the forefront and get involved with the programmes meant for them. Who can better talk about their challenges than they themselves? We need to bring in more TB survivors as advocates.”