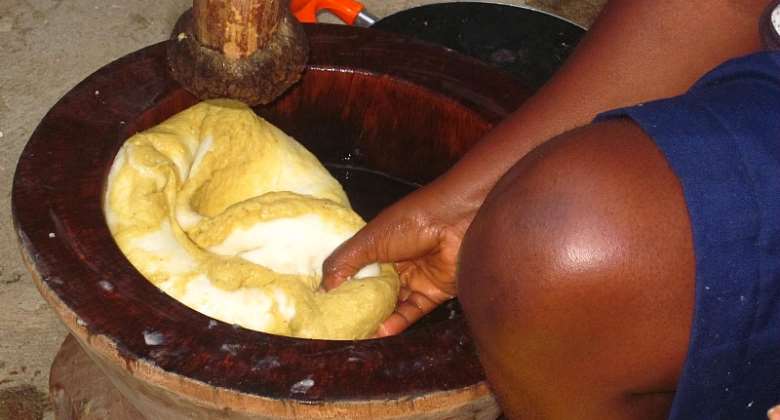 I have been following the Fufu controversy with keen ears and I must admit that my own appetite has been threatened by the challenging thoughts the old man shared.

Pastor Mensa Otabil, a thought leader as he is, put a spoke in the wheel of many West Africans particularly Ghanaians. According to him he vowed not to eat Fufu and made sure, since then that Fufu does not find a way into his menu. He gave scientific and historical reasons which cannot be easily discarded as one of those ‘too known’ comments from another ‘educated’ African. And I am sure his committed followers will be struggling with their Sunday meals and would probably be cursing themselves in disgust for listening to that message.

Apart from rice balls, many Ghanaians like to eat pounded mixture of cassava with plantain or Fufu, as it is called in local parlance, on Sundays. Fufu, a major staple for the Akan population has gained currency across all ethnic groups. It also serves as a choice dish across Africa during festivities like Christmas.

Annoyance reasons
I am Ewevi and so I ate Banku (call it Akple) all my life until 2003 when I had migrated to Hohoe for work. I stayed with my aunt and her husband. My aunt’s husband who farms yam thinks that Fufu should be eaten every day. This forced me to learn grudgingly how to pound Fufu with my feeble arms. Gradually, I didn’t see why I would punish myself with the drudgery of pounding Fufu and not eat a morsel. So, I later factored Fufu into my menu.

However, Fufu pounding is so annoying that after 10 minutes of paced pounding, my palms develop blisters and it makes me look stupid that I have to continue pounding until all cassava slices are transformed into a sticky paste.

After years of pounding I thought I had improved my Fufu pounding skill but my mum thinks differently: she thinks I am lazy because I have an awkward pounding pace and I do not exert much strength on the cassava. Till date I see Fufu pounding as a senseless drudgery and I sighed with relief knowing that Pastor Otabil has spoken for many young men, and husbands who are seen as lazy only because they refused to be bullied by appetite.

Eating with fingers
Pastor Otabil described eating with the fingers as ‘simply antiquated and unhygienic’ and we all know this. But not even the most educated want to part ways with traditional ways of eating the delicacy. My uncle who traveled for his second degree in the United Kingdom told me how shocked he was at Africans who ate Fufu and Banku with cutlery. He told me he cannot do that and I know he won’t even if he lived in Buckingham Palace.

Eating with the bare hands is indeed unhygienic but we are so enslaved that even the most ardent follower of the pastor will struggle to eat Fufu without the fingers. Not even many medical doctors or nurses eat Fufu or Banku with cutlery. Many like ‘the Okomfo Anokye way’.

He also said the pounding of Fufu breeds bacterial infections and he cannot be wrong. Meantime, the respected pastor is not the first to have attributed Fufu to one disease or another. A few years ago, there was a controversial claim made by MP for Ablekuma North, Justice Joe Appiah that Fufu and other starchy foods cause cancer. Such a voodoo conclusion; one cannot think far!

Like Bob Marley said, “no chains around my feet but I am not free”. Indeed we are so imprisoned in the antiquated walls of culture that technology and travel haven’t affected the way we eat. The advent of Neat Fufu has not changed our Fufu preparation even though it saves time. And I must admit that I have never eaten Neat Fufu before. Some of us Ghanaians think Neat Fufu cannot make any meaningful impact to our taste buds and watch those who eat processed Fufu with disdain.

Now, there are mills that make Fufu preparation easy. You only have to peel and boil your cassava and yam or cassava and plantain, take it to the mill and after 5minutes, voila!

Meanwhile, it is believed that the sticky paste produced by the mill is not as sticky as the one produced with manpower which is also mixed with sweat and saliva.

The Philosophies
The meal beyond its taste has been attributed to various philosophies. Growing up, I heard sexually active teenagers euphemize sex. They used the paced pounding of fufu as a euphemism for sex… Seen? Maybe they picked such phrases from elders they eavesdropped on and you can trust Ghanaians to be creative with sex just as they do with alcohol. Now the word is Bi3gya!

Then during election years, cartoonists and peace campaigners use Fufu to denote peace and harmony. They say “make fufu, not war”. Time was when I personally referred to Fufu in earthenware with soup covering it as an Island after my social studies teacher taught us Islands.

Shackles of Tradition
The cultural dimensions of Fufu go beyond its preparation. I don’t know of what happens elsewhere, but in my part of the Volta region you do not pound Fufu after 6p.m. When you are caught pounding Fufu after 6p.m, you are summoned to the chief’s palace and fined. It has nothing to do with good eating habit or digestion, it only has to do with Fufu: a food entangled by many shackles of tradition.