The Hopeful 100-Days In Office Of President Nana Akufo-Addo 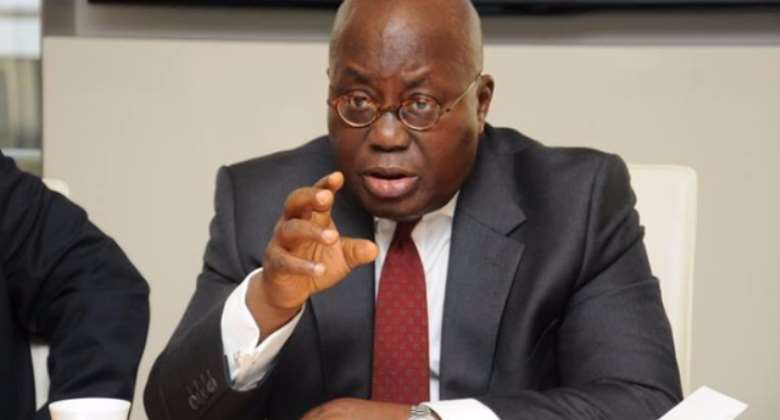 The first hundred days of any presidency could be measured by the successes and accomplishments as of the time of assumption of office. We are in a cruise for President Nana Akufo-Addo’s 100-day mark and we are expectant just as we are hopeful for a very good 100th day score.

To begin with, it has been a good start so far taking into consideration the caliber of his appointees. Putting the right caliber of people to man the various ministries and agencies task is sine qua non for progress for development. I have always argued that even though Ghana abounds in human resources, we are responsible for shooting ourselves in the foot for the retarded development that we find ourselves in. The trajectory has to change; How do we appoint to responsible positions, individuals who are only interested in nickeling and diming the economy? How could government officials do deals, own companies in flagrant violation of conflict of interest? How much do they earn to compete in the craze for cars and in the build of mansions? Do we consider competence, experience, patriotism and qualification in our appointment? Or do we just consider party supporters, friends and relatives without the requisite experience and expertise to fill positions?

Reason why it has been good news to hear President Nana Akufo-Addo charged his ministers to declare their assets in two weeks. The instruction is in line with an effective asset declaration regime which is the first start to instilling transparency in governance and hence fighting against corruption, thereof. By the president careful selection of his appointees and his insistence on asset declaration, he is already set to reshape government’s role through competent appointees to man government agencies. As we have experienced in the past, lack of competent, honest and dedicated appointees could normally be a president’s nemesis in a general election.

Within the continent, we have seen the President exert his power and influence at the African Union culminating in the appointment of a Ghanaian as a Deputy Chairperson of the African Union Commission. Globally, there is a vibrant, robust team of crack legal brains currently at the International Tribunal for the Law of the Sea (ITLOS) in defense of Ghana’s Maritime boundary against the Republic of Cote D’Ivoire. But most quintessentially, the First Lady, Rebecca Akufo-Addo inaugurated the Floating Production and Storage Offloading (FPSO) vessel at a ceremony in Singapore. The good thing about the newly constructed vessel is to convert crude oil and gas into finished products on the same platform and this surely is a step in the right direction.

We expect the new government to crack down on the dumping of substandard goods and products coming in from Asia. My wish is to see a number of industries get established as President promised us. How are we still importing toothpicks while we have mangrove swamps in Ghana? Let’s take a cue from Tanzania where a total of 1,423 industries have been set up within one year of President John Magufuli in office as reported by his principal Trade Officer.

Quality education is a must for Ghana and if President Nana Akufo-Addo can firm out a policy ensuring quality education to Ghanaians by ensuring the nation achieve that vision, it would be a good step in the right direction. It is encouraging to hear the President state his government’s objective to deliver quality education through a number of measures that he would adopt to make this happen.

We need vigorous evidence based research to be conducted in various fields for finding to inform policy formulation. It was good news to hear the president mention the creation of an agency responsible for diaspora relations. I am reliably aware that a New York based Diaspora Group presented a proposal on Diaspora Engagement Initiatives to both Ghana missions in Washington, D.C and in New York. A follow up could be pursued regarding this initiative. This project is laudable and Government of Ghana stands to benefit significantly in terms of brain gain through research to identify the goals, map Diaspora geography and skills, create a relationship of trust between Diaspora population and government and ultimately mobilize Diaspora to contribute to sustainable development.

And yet what strikes me most when I think about this diaspora engagement project is a running strain of untapped resource which is a positive venture in itself. How do we unlock this untapped talent in the diaspora for sustainable development in Ghana?

I know the new administration has more issues to tackle and we are hopeful that come the 100th day, we shall see snapshots of the vision he would have laid down for Ghana.

'Akufo-Addo's people not talking to me anymore because of my...
10 minutes ago