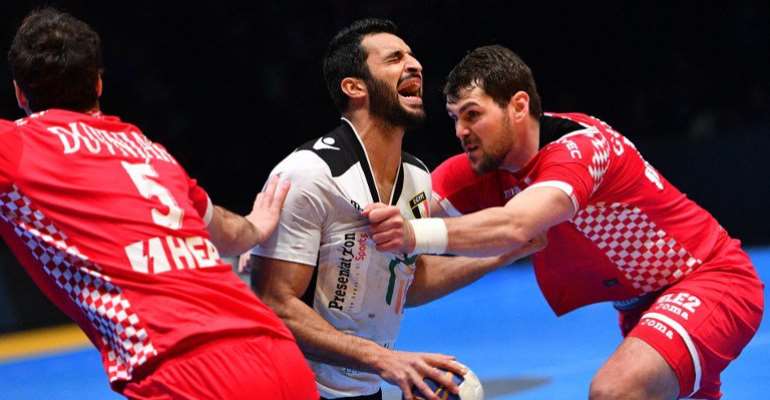 They trailed badly in the first half, losing it by 13-7. But they came back strongly in the second half and gave the 2003 World Champions, Croatia, a real scare. They won that half but too much damage was suffered in the first half and it was not enough to see them through to the quarter-finals. But with that performance at the ongoing 25th International Handball Federation Men’s World Championship in France, the African champions, Egypt, re-established itself as the best handball nation in Africa.

Of the three African representatives (the others were Tunisia and Angola) Egypt was the only nation to qualify from the group stage. Incidentally, Tunisia and Angola found themselves in the same group C. Tunisia’s two drawn games and a victory against Angola were not enough to see them through to the next round. As for Angola, they came last in the group after losing all her games.

Handball is more popular in the Arab countries than in Sub-Saharan Africa. Both Egypt and Tunisia have hosted the World Championships once each and Egypt will hold it again in 2021. This will surely make the game more popular in the country. But Egypt is already great, by African standards. Their best World Championship performance was a fourth place in the 2001 championships held in France. The current President of the International Handball Federation is Hassan Moustafa – an Egyptian!

The biggest upset in this year’s Championships is Olympic champions, Denmark, losing to Hungary which just scraped through from the group stages. Another surprise was Qatar which knocked out Germany by a lone goal margin. Handball is popular in Germany which, together with East Germany, won the championships three times, hosted the first World Championships in 1938 and another five more championships.

Why is Handball not a big game in Ghana? It has been the general belief that Ghana, like many former British colonies, is not good in games played with the hands because our colonial masters were not, themselves, interested in those games and never encouraged them. That is why we are not good at basketball and volleyball either. We have no traditions in those games.

One other obvious reason is our over-concentration on football at the expense of other games. The Sports Minister designate, Isaac Asiamah, was recently quoted as saying he would not only be “Minister for Football”.

There is also the complaint of no money. But Handball is cheap to play. It is an indoor game but can well be played outdoors in the villages wherever basketball and volleyball can be played. It needs a smaller pitch than football and the balls and footwear are cheaper than their equivalents in football.

It is not that we do not know of this game. Ghana is a member of the African Handball Confederation (CAHB) with its headquarters in nearby Abidjan. The confederation holds several tournaments – African Nations Championships, African Junior Championship, and African Youth Championships. There are also three club events – Champions Cup, Cup Winners’ Cup and Super Cup. All of these involve men and women. All these championships have been dominated by three countries – Egypt, Tunisia and Angola. Ghana is nowhere to be found in the records.

Not everybody can become good at football and play in the big leagues and earn millions. Handball may not be as fanciful as football but it can take you far too. There are professional Handball leagues in many European countries that pay good money to talented players. Germany, France, Spain have professional handball leagues with foreign players. Handball is also an Olympic game that brings glory to the countries that do well in it.

Let us hope the new sports minister’s pledge to take other sports seriously will see a surge of interest in Handball in Ghana. We can look to our neighbours Cote d’Ivoire, Egypt and Angola to show us the way.

And, oh, the quarterfinal games have been decided. Norway ended the Hungarian dream with a 31-28 victory. Host nation, France, saw the better of four times champions, Sweden. Qatar bowed out to Slovenia 32-30. But the-nail biter was the game between two former champions – Spain and Croatia. The Croats won by the odd goal. The semi-finals will see France take on Slovenia and the Norwegians slug it out with the Croats. The Africans have returned home.

It looks like the French are on course for an unprecedented sixth championship victory to further cement their reputation as the best Handball nation in the world.

And in Ghana, we are watching football. That is the only game we know of…