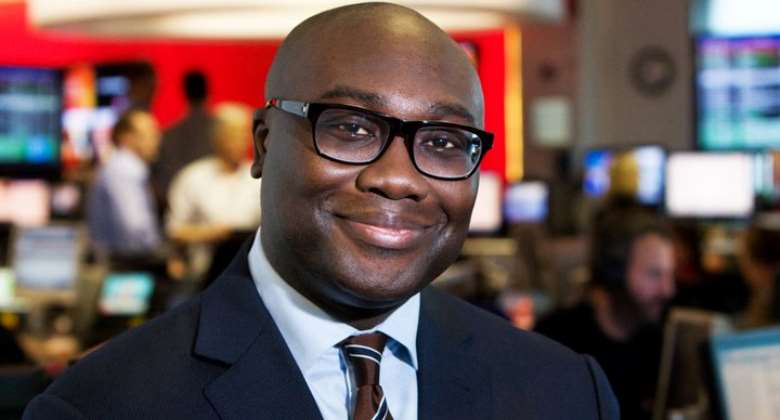 It was with a sad body, morose mood; battered-morale, weakened and attenuated spirit that I received the death of Komla Dumor. Though I had not followed him quite long before his departure to the underworld, I caught glimpses of him travelling round the continent presenting his celebrated programme Focus on Africa on BBC. I could not catch him during his hey days at Joy FM because I was as young as a student in St. Cecilia’s Basic School in Nima and O’Reilly Senior High for the period he spent there.

Though I was very current about political happenings around that time; I had neither the time nor the need to listen to morning shows. And so I missed the Boss player as he was known at Joy FM.

Today is exactly three years since he travelled to the land of no return. And the Nima boy once more wishes to express his profound heartfelt condolences to Joy FM, BBC and family of Komla Dumor; our sparkling and dazzling star who kicked the bucket a few days ago.

Komla Dumor posthumously is a great source of inspiration to the people of Ghana and beyond. He was African in every way. His life story is one of the stories that make life worth-living in a seemingly hopeless and worthless world.

Personally, I have an indescribable feeling of the inspiration he left. Partly because I shared part of his life. Komla Dumor studied Medicine at the University of Jos and came out with nothing after four years of grueling academic work. I also studied Science Laboratory Technology at Accra Technical University and came out with only a withdrawal letter.

Komla Dumor simply put, was dismissed for Academic non-performance. Well, all I remember is that I was also handed my withdrawal letter from the polytechnic for Academic non-performance. A secret that has not left my chest; not to even my parents who put me through school until now that I have told a few friends. The letter, I tore it in order to remove traces of the unfortunate from my life. It is indescribable the mental and emotional agony I went through those days.

When you are handed a withdrawal letter a week to wrap up your final exams after years of study is something not even the care-freest man could countenance. Especially when you are the most popular student in your department and coming from a poor family that has hopes of things been better very high because you are about finishing school. So I have a snippet of the feeling he had especially when he indicated that it was difficult for him those days to live as a human being.

But I came out of it with the realization that “in order to reach the top of the mountain, you have to climb every rock.”

For many years he lived like the man shedding tears in the rain. No one saw the tears but he had pain in him. He decided to wear a smile on the pain. And through that he inspired many. He is noted to have said that “failure is never the end unless you allow it.” Great men they say think in tandem. Hence he decided to live his life just like Muhammad Ali resolved: “I hoped to inspire others to take control of their lives and to live with pride and self-determination. I thought perhaps if they saw that I was living my life the way I chose to live it- without fear and with determination-they might dare to take the risks that could set them free.”

The Arabs have a peculiar saying that “a people died yet they still live among men and a people live yet are dead among men.” This is a statement to signify how the world will continue to glorify anyone who strives to outrun the failure that delays him, overcome his weakened faith, never stop the race and have a will that never retires.

The Nima boy believes that Komla Afeke Dumor will have his name echo and reverberate across the centuries for his preponderant impact on Ghana, Africa and the world at large.

Komla is one of the men whose life should be told and retold our upcoming generation to tap from his unquantifiable experience and exposure. I have the firm belief that he has made positive strides and will continue to do so posthumously.

He was indeed an oasis of inspiration in the dry and arid desert of helplessness and despondency in our part of the world. A gem he was and truly a solitaire.

Komla Dumor wrote a four-paragraphed message to some of his friends; the message went viral hours after his death. He hinted in one paragraph:

“I remain silent in my personal strife and misery. I kept smiling and pushing on to engage with my audience and increase my following. Long days and frustrating times but I kept going, but I kept going, through the West Gate Mall coverage through Mandela’s funeral. Even when illness had me collapsing, I delivered. ”

The Nima boy believes strongly that Komla Dumor is a sun that will never set.

Death indeed comes at a time!
Inusah Mohammed.
NB: The Writer is a Nima boy.