Tackle Unemployment And Corruption While Upholding Ethics And Accountability In Government 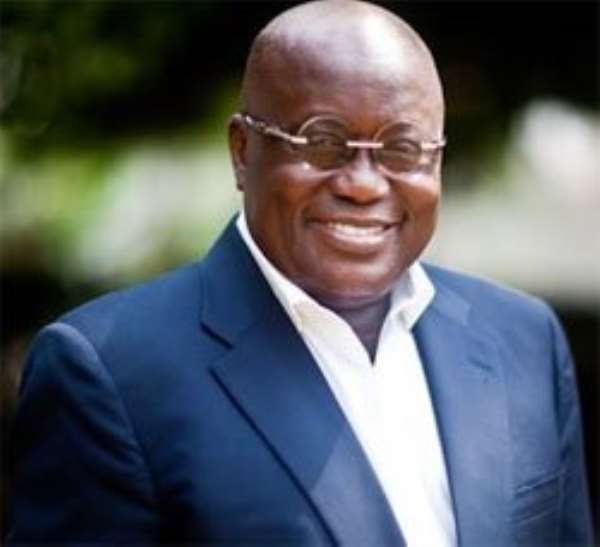 Africa's long suffering people are all too frequently caught in the crossfire of rampaging wars, millions afflicted with diseases, preyed upon by greedy despots and prevented by corrupt leaders and bureaucracies in a kleptocracy from obtaining basic schooling, medical attention, and any semblance of economic opportunities.

A look at the socio-political and economic landscape in Ghana today under the previous administration reveals a horrifying picture of massive corruption, embezzlement and over inflated contracts. According to Martin Amidu, the evidence is overwhelming. There was massive corruption, staggering poverty, unemployment, poor education, lack of good drinking water and uninterrupted electricity, all manifesting in a general degree of hopelessness among the populace. According to the World Bank Human Development Index, almost half of the national population live below the poverty line surviving on less than 2 dollars per day. The economic conditions felt by the ordinary Ghanaian are poorer than ever.

The country economy is in deep crisis as the new government will soon reveal to us. With a debt to GDP ratio of more than 72%, it is a tough situation Nana Addo has inherited. Servicing that debt alone will take a huge chunk of our foreign exchange earnings. Meanwhile expectations are high. He has to tackle the biggest problems of corruption in the last government and make sure it does not rear its head in his own government, poverty reduction, and cutting unemployment are other priorities. Several decades ago, may be you could live with an economic growth rate of 3.5% per annum, meanwhile the labour force in the country is growing at 5% per annum and creating unprecedented labour tensions and the result is a huge unemployment problem among the youth. More than half of the jobless rate in Ghana today is accounted for by people in their 20's and 30's. This is very alarming. Figures are hard to get by but it is abundantly clear that about six out of ten University graduates this year are without jobs not to count Secondary school and Technical School graduates.

There is no system in place to absorb new graduates into the workforce as new graduates are left on their own to fend for themselves. I was almost moved to tears the other day as I listened to a forty something year old university graduate giving a testimony at church for landing his first job. He was so happy and thankful to God for giving him his first job. Obviously I was happy for him too because he counts himself so lucky to have a job while many of his colleagues were still searching. But at 40? In many places, at 40 you are already a senior manager not starting your first job and there is no cause for celebration.

Just how far a young Ghanaian graduate would go to get a job is your guesss. The answer is from anywhere to everywhere. That explains the sad story of some Ghanaian stoways. They assumed rightly or wrongly they can find jobs abroad if they can't get one at home. And do you blame them? The need to create new opportunities is more crucial than ever. The dilemma facing us now is not only that more than 200,000 people join the job market every year, but that many of them are well educated and naturally have higher expectations.

Lack of job after the first degree force some people back to school hoping that if they get a Masters degree things would be better but they come out to meet even a tougher job market. How can we take care of our youth as a nation if we don't care whether they are getting the right experience at the right time? The fear of the unknown has kept many Ghanaian graduates from foreign universities staying abroad.. They are scared they may not get a job if they come home. The jobless rate rose as “better Ghana” “Changing Lives” and “Transforming Ghana” failed to create jobs for new graduates entering the job market but helped those in Mahama’s government to inflate contracts and acquire a fleet of V8s. Since the private sector in Ghana is small, the onus of creating jobs fall squarely on the shoulders of the government, and government needs to create about 400,000 jobs annually if the unemployment rate is to be addressed. The government must take the lead in economic development and not leave it to a weak and struggling private sector overburdened with taxes. It is the duty and the responsibility of the government to lead the way and also create the right atmosphere to attract foreign direct investment in our economy and for the private sector to grow.

I have written on this subject several times. The issue of corruption in government needs to be tackled head on. Just paying lip service to the slogan of "zero tolerance" fools no one. Many Ghanaians are of the belief that the perception of corruption in government, and corruption that comes to the open are just a tip of the iceberg. These are big problems that are depriving communities of the good drinking water and the electricity they need. It is preventing investment in vital health service delivery and it prevents school children from getting access to good quality education.

Over the years, what happened to those indicted by the Auditor General’s report, what about the Parliamentary Accounts Committee’s indictments in its public sittings? Why is Woyome still owing us after he was directed to pay us back our money? Nana Addo’s government must tackle the corruption in the National Youth Employment program, National Health Insurance Scheme, SADA, GYEEDA, Asongtaba, SUBAH, Bus Branding, and all the numerous cases of corruption in the past government. All that money cannot be allowed to go waste while Ghanaian kids continue to die from treatable malaria and other sicknesses and continue to study under trees.

What does this tell about the government that supervised this rot and the party that lost the last elections? Unless we tackle governance and accountability we are not addressing the real issues, we are not tackling the bread and butter issues. To tackle corruption adequately, I recommend the setting up of a Government Accountability Project (GAP), a private watch dog group to ensure accountability on the part of the government. The Economic and Organized Crime (EOCO) Office and CHRAJ, however well intentioned they may be, have been rendered powerless entities that can’t discharge their duties efficiently. They appear to be government controlled, remember, Mahama’s Ford bribery saga? That is why a private watch dog group is preferred.

The current maintenance of law and order and prevention of corruption is systematically flawed. There is also a need to install Inspector Generals (IPs) in every ministry reporting to a Public Integrity Commissioner (PIC) (a post created by Parliament) who will have the power to refer corrupt officials to an Independent Public Prosecutor (IPP) for prosecution. The installation of Inspector Generals, and the creation of a Public Integrity Commissioner together with an Independent Public Prosecutor are important steps to fighting corruption and cronyism which in turn will help strengthen democratic institutions in the discharge of their duties and make them more effective..

There is a consensus for constitutional amendment that will strengthen Parliament to make it perform its duty of checking executive power and also controlling the national purse more effectively. The current constitution that directs the President to appoint majority of Ministers from Parliament makes Parliament seems like a junior partner to the Executive branch of government. Our constitution is so flawed and need to be amended. It has concentrated all powers in the hands of the executive branch of government seriously constraining the work of Parliament. Our President under the 1992 constitution is just too powerful. He has the power to hire and fire everyone in Ghana, and also to order or not to order a probe into everything. If he doesn't do it nobody seems capable unless he directs. Parliament must and can have the power to probe executive acts. By the way, this 7th Parliament must pass the Right to Information Bill. And the judiciary must not only be seen to be independent but must act explicitly so in a transparent and fearless way that gives meaning to Judicial independence. .

I give the current President credit for trying to put together the leanest government ever in the fourth republic. But again, there are too many new ministries created that makes one wonder what the rationale is. For instance, while we all feel that Ghana has to develop and built a good and perhaps high speed railway network for transportation of goods and human passengers to ease the burden on our roads, but do you necessarily need a full ministry to do that? We the Ministries of Transport, and Road and Highways, it is not necessary to add to that. What can the Ministry of Zongo and Inner Cities do that the Local Government and Rural Development Ministry can’t? Why a full Ministry for Regional re-organization? And another one for Monitoring and Evaluation? The last two for instance can be a department under the Presidency or working from the Presidency but not a full Ministry. My point is the government has to have in mind the need to downsize. If the President keep adding to the list, the size of the government may become too big and costly, in fact over bloated. Japan runs the World's third largest economy with just 17 ministers.. How come a country like Ghana has that many ministers and deputy ministers. We need fiscal discipline.

The people are overburdened with taxes while previous governments displayed a great deal of fiscal indiscipline. It goes without saying that government needs to create the right business atmosphere for industries and businesses to thrive so that they can compliment government efforts at creating jobs. Elsewhere taxes are cut to spur growth, but in Ghana, an economic management team that lacked fresh ideas under Mahama and the NDC always looked up to increased taxation as a way of generating revenue. And with that massive leakages in the revenue bucket through corruption, no amount of tax increases was able to generate the much needed government revenue. Government needs to simplify taxes, lower tariffs on imports, and clear away red tape to encourage entrepreneurial skills to flourish. Too much taxes stifle growth. You don't need to be a prize winning Nobel economist to know this.

The priority should be to do everything possible to wage a battle against poverty, raise living standards, and encourage businesses to thrive. Some 10 million Ghanaians live on less than two dollars a day, this is unacceptable and a shame. Ghanaians voted for change and they have very high expectations of this government. Nana Addo has promised he won’t let us down. Ghanaians are looking up to him.

Ben Ofosu-Appiah.
Accra
The author is a senior policy strategist and advisor, social, economic and political analyst. Your views and comments are welcomed; [email protected]