…Include American Visas In Ghana’s Dubai 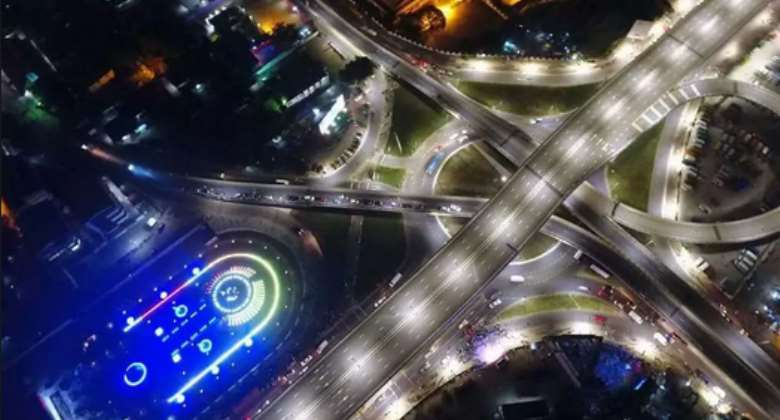 A couple of days ago the President inaugurated the redesigned and reconstructed Circle Interchange. It was definitely beautiful at night. I am happy that traffic at circle will reduce, and if we properly maintain the facility, if we do not allow hawkers to take over, and if we do not allow scrap dealers to steal the metals, then Ghana stands to benefit from the investment.

I have heard the Circle interchange being compared to Dubai. I am not sure if anyone of those who started that comparison has ever travelled to Dubai. I think we should stop embarrassing ourselves in such manners. Sometimes I weep for Ghana. And I have said it many times, that Ghana is over 500 years behind the West. I know you will dispute this, but I just want to challenge you to take one trip to Europe or America, or even your Dubai, and you will agree with me that poverty of knowledge is what is causing us to rush to follow any pain wrapped in silk.

As I have said, the circle redesign and reconstruction is a good thing, and we will need to commend the government for pursuing it. But to celebrate it in the manner it is being done, is like jubilating upon receiving crumbs from your late father’s maid who inherited all of your father’s properties. It is so sad that we are so poor that even rats have become our delicacies.

America is virtually my second home. I have been to at least 25 states in America, and several of their cities several multiples of times. I have seen very sophisticated interchanges, back-to-back, throughout the country.

And in a lot of instances I have wondered why Ghana, a country of gold, a country of cocoa, a country now of oil, a country with such a fertile land, has become so poor, so poor that anything that looks like yellow is interpreted as gold. We are so encumbered in our nothingness that bread has become the prize for our gold, so much so that we celebrate pains, we celebrate the dying of our brothers if death is what will win us power, why?

Trust me, we are only publicly demonstrating our poverty by the way we are jubilating over this new circle interchange. In Dubai this Nkrumah Interchange will not attract any news. In America it will not receive any media space. Right here on the continent, South Africa, this interchange will not be part of our conversation for the day.

I have watched the NPP enumerating the number of interchanges they also constructed when they were in government. They talked about Ofankor, Tetteh Quarshie, Asokwa, and five other places. These are all the enumeration of our failed shameful list of governance crumbs. In fact, currently in Ghana there is no interchange worth celebrating.

We have celebrated the reconstruction of the Mallam Yamuransa road, Aburi road (both for Kufuor), upgrades of Kumasi and Tamale Airports to international standards (both for Mahama). I listen to the debates, I listen to the pride, and I reel in pain. Why should we become so poor?

The first time I landed in Dallas airport in Texas I thought this was a city on its own. From my terminal to the next terminal, I had to take a train, within the airport, and I was on that ride for several minutes before I arrived at the next terminal. The same thing happened to me with my first landing at Chipotle International Airport. For Ghanaians I guess the most popular airports is the Heathrow, and by extension, I guess Terminal 5.

For your information, Heathrow Terminal 5 is mainly a British airways terminal. That terminal alone is several times bigger and sophisticated than a dozen times that of Kotoka International Airport.

This week the United States and the United Kingdom governments have in a separate statements condemned the recent election related violence in Ghana. These statements, which is obviously inspired by the violence that ensued on the premises of Nana Akufo Addo, also threatened to deny or revoke visas of people who incite political violence in the run up to this years elections.

I wish the US and the UK will rather do the opposite. I wish they will issue all Ghanaians visas, just allow them to visit each of your countries for just two months, let them tour a few places, and show them excellence. Take them to your business and financial hubs. Take them to some of your airports, and customer service centers. Take them to Beverly Hills. Take them to Irvine. Take them to Norton Park. Take them to Disneyland, and Disneyworld. Let them fly through Heathrow, O’Hare, Texas, LAX, and let them see for themselves how long ago such political primitiveness was abandoned.

I will like to give one example of a wonder bridge in the world, the Golden Gate Bridge. I have used this bridge several times each time I found myself in San Francisco. Wikipidia writes, “The Golden Gate Bridge is a suspension bridge spanning the Golden Gate strait, the one-mile-wide (1.6 km), three-mile-long (4.8 km) channel between San Francisco Bay and the Pacific Ocean. It opened in 1937 and was, until 1964, the longest suspension bridge main span in the world, at 4,200 feet (1,300 m)”.

Do you get the drift? This is not something I am imagining. This is real. I have personally used this bridge several times. This bridge, if we had it in Ghana, I am sure we would have borrowed over ten million US Dollars to draw a program to celebrate it. The Golden Gate Bridge is reported to be possibly the most beautiful, and the most photographed bridge in the world. Yet by 1964, another bridge had been built to be more miraculous than the celebrated Golden Gate Bridge. This is what we need to, as a country, challenge ourselves with.

So yes, our government has done what it has to do by constructing this facility. But we should not, by our behavior, send a wrong signal out there that this is the best we could ever have had.

Unfortunately we have given our leaders a blank sheet of deceit, and they keep writing their names on it. We have thrown our skulls to them in plain helplessness, and they keep filling them with rots. We have refused to learn, we have refused to educate ourselves, and this has allowed our political leadership the luxury to inviting us to celebrate mediocrity with them.

Anyway, I would have thought that we would have used the rest of the week, after the inauguration of the interchange, to educate the public about how to use the nuances of the facility. I recall the ordeal people went through in trying to navigate the Tetteh Quarshie interchange. Travelers from Madina who were going to Accra Central found themselves onto the Quarshieman highway due to misunderstanding of the architecture of the interchange. A well designed public education strategy, to ensure that users are able to navigate their ways on the highway is what is needed at this point.

Unfortunately the inauguration was preceded by the violent confrontation that happened in front of the resident of Nana Akufo Addo. So our news is now dominated by who caused the problem, the NPP or the NDC? The cabal within have stolen the news, and have made it theirs. What can we do? Nothing!