More Africans Enter U.S. Than in Days of Slavery 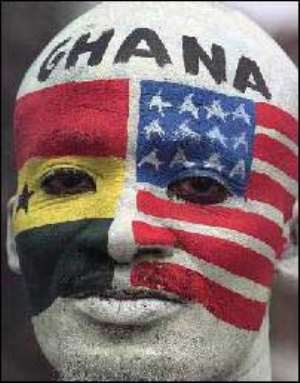 For the first time, more blacks are coming to the United States from Africa than during the slave trade.

Since 1990, according to immigration figures, more have arrived voluntarily than the total who disembarked in chains before the United States outlawed international slave trafficking in 1807. More have been coming here annually - about 50,000 legal immigrants - than in any of the peak years of the middle passage across the Atlantic, and more have migrated here from Africa since 1990 than in nearly the entire preceding two centuries.

New York State draws the most; Nigeria and Ghana are among the top 20 sources of immigrants to New York City. But many have moved to metropolitan Washington, Atlanta, Chicago, Los Angeles, Boston and Houston. Pockets of refugees, especially Somalis, have found havens in Minnesota, Maine and Oregon.

The movement is still a trickle compared with the number of newcomers from Latin America and Asia, but it is already redefining what it means to be African-American. The steady decline in the percentage of African-Americans with ancestors who suffered directly through the middle passage and Jim Crow is also shaping the debate over affirmative action, diversity programs and other initiatives intended to redress the legacy of slavery.

In Africa, the flow is contributing to a brain drain. But at the same time, African-born residents of the United States are sharing their relative prosperity here by sending more than $1 billion annually back to their families and friends.

"Basically, people are coming to reclaim the wealth that's been taken from their countries," said Howard Dodson, director of the Schomburg Center for Research in Black Culture, in Harlem, which has just inaugurated an exhibition, Web site and book, titled "In Motion," to commemorate the African diaspora.

The influx has other potential implications, from recalibrating the largely monolithic way white America views blacks to raising concerns that American-born blacks will again be left behind.

"Historically, every immigrant group has jumped over American-born blacks," said Eric Foner, the Columbia University historian. "The final irony would be if African immigrants did, too."

The flow from Africa began in the 1970's, mostly with refugees from Ethiopia and Somalia, and escalated in the 1990's, when the number of black residents of the United States born in sub-Saharan Africa nearly tripled. Combined with the much larger flow of Caribbean blacks, the recent arrivals from Africa accounted for about 25 percent of black population growth in the United States over all during the decade. Nationally, the proportion of blacks who are foreign born rose to about 7.3 percent from 4.9 percent in the 1990's. In New York City, about 1 in 3 blacks are foreign born.

According to the census, the proportion of black people living in the United States who describe themselves as African-born, while still small, more than doubled in the 1990's, to 1.7 percent from about 0.8 percent, for a total estimated conservatively at more than 600,000. About 1.7 million United States residents identify their ancestry as sub-Saharan.

Those numbers reflect only legal immigrants, who have been arriving at the rate of about 50,000 a year, first mostly as refugees and students and more recently through family reunification and diversity visas. Many speak English, were raised in large cities and capitalist economies, live in families headed by married couples and are generally more highly educated and have higher-paying jobs than American-born blacks.

There is no official count of the many others who entered the country illegally or have overstayed their visas and who are likely to be less well off.

Kim Nichols, co-executive director of the African Services Committee, which directs newcomers to health care, housing and other services in the New York region, estimates that the number of illegal African immigrants dwarfs the legal ones. "We think it's a multiple of at least four," she said.

Africans' reasons for coming echo the aspirations of earlier immigrants.

"Senegal became too small," said Marie Lopy, who arrived as a student in 1996, worked as a bookkeeper in a restaurant and earned an associate degree in biology from the City University of New York.

After winning a place in an American immigration lottery that his secretary had entered for him in 1994, Daouda Ndiaye recalls being persuaded by his six children to leave Senegal, where he was working as a financial manager. "I said, 'I'm 45, I'd have to build a whole new life, I'd have to go to school to learn English,' " he recalled. "They said, 'We want you to go and we want you to send for us because there's more opportunity in the U.S. than here.' "

His wife and two of his children have joined him in the United States, where he has worked as a sporting goods store manager and is now a translator.

That the latest movement of black Africans arriving voluntarily surpasses the total who disembarked in chains before the United States outlawed international slave trafficking is a bit of a statistical anomaly. That total, most historians now agree, was about 500,000, with an annual peak of perhaps 30,000, compared with the millions overall who were sold into slavery from Africa. Many died aboard ship. Most were transported to the Caribbean and Brazil, where they were vulnerable to indigenous diseases and to the rigors of raising sugar cane, which was harder to cultivate than cotton or rice, the predominant crops on plantations in the United States, where the slave population was better able to survive and reproduce.

Moreover, black Africans represented a much higher proportion of the population then than they do today. In 1800, about 20 percent of the 5 million or so people in the United States were black. Among nearly 300 million Americans today, about 13 percent are black.

Still, with Europe increasingly inhospitable and much of Africa still suffering from the ravages of drought and the AIDS epidemic and the vagaries of economic mismanagement, the number migrating to the United States is growing - despite the reluctance of some Africans to come face to face with the effects of centuries of enduring discrimination.

To many Americans, the most visible signs of the movement are the proliferation of African churches, mosques, hair-braiding salons, street vendors and supermarket deliverymen, the controversy over female genital mutilation and the election last year of Barack Obama, son of a native Kenyan, to the United States Senate from Illinois. Especially in New York City, the shooting deaths of two unarmed African immigrants, Amadou Diallo from Guinea in 1999 and Ousmane Zongo from Burkina Faso in 2003, come to mind.

Immigrants arrive with their own perceptions and expectations, from countries where blacks constitute a majority at every level of society, only to discover that whether they are professors or peddlers, they may be lumped together here by whites and even by American-born blacks.

"You have the positive impact that race is not seen to be an absolute definer of people's opportunities," Kathleen Newland, director of the Migration Policy Institute, a nonpartisan research group, said, "but that begs the larger question of what does it mean to have a black skin in the United States."

Agba Mangalabou, who arrived from Togo in 2002, recalls his surprise when he moved here from Europe. "In Germany, everyone knew I was African," he said. "Here, nobody knows if I'm African or American."

Ms. Lopy, who now works as a medical interpreter for the African Services Committee, describes herself as "African, first and foremost," though the identity of her children will depend on whom she marries and where. "I'll raise them to be African-something," she said, "but ultimately they'll define it for themselves."

Sylviane A. Diouf, a historian and researcher at the New York Public Library's Schomburg Center and Dr. Dodson's co-author of "In Motion," said that Americans have a more positive view of immigrants in general than they do of American-born blacks. Referring to African immigrants, she said: "They are better educated, they're here to work, to prosper, they're more compliant and don't pose a threat."

Dr. Dodson added, "They're not politically mobilized as yet and not as closely tied to the African-American agenda."

While the ancestors of most Caribbean-born blacks were enslaved, and slavery also victimized the forbears of many African-born blacks, the growing proportion of immigrants may further complicate the debate over programs envisioned to redress the legacies of slavery.

"I think there is a legitimate set of specific claims by persons born in the United States that don't necessarily apply to Caribbean or African populations that have come here subsequently," Dr. Dodson said.

"African-born and Caribbean-born brothers and sisters have realized that the police don't discriminate on the basis of nationality - ask Amadou Diallo," said Professor Charles J. Ogletree Jr., who teaches at Harvard Law School and has warned colleges and universities that admitting mostly foreign-born blacks to meet the goals of affirmative action is insufficient.

"Whether you are from Brazil or from Cuba, you are still products of slavery," he continued. "But the threshold is that people of African descent who were born and raised and suffered in America have to be the first among equals."

French-speaking Haitians do not necessarily mix with English-speaking West Indians, much less with Africans, and competition for jobs has been another source of tension.

"The Africans tend to be quite industrious and entrepreneurial and often take advantage of opportunities that might have been here for others before," said Kim Nichols of the African Services Committee.

Analyses by the Department of City Planning, and by the Lewis Mumford Center for Comparative Urban and Regional Research, in Albany found recent immigrants often segregated from other blacks. The census found Nigerian clusters in Flatlands and Canarsie in Brooklyn and Ghanaians in Morris Heights and High Bridge in the Bronx.

"As with European ethnics at the turn of the century," Joseph J. Salvo, the director of the population division of the Department of City Planning, and Arun Peter Lobo, the deputy director, wrote recently, "ethnicity has been a powerful force in shaping black residential settlement in New York."

Immigration may also shift some of the nation's focus from racial distinctions to ethnic ones. "Certainly, South Africa showed us that minority status does not necessarily correlate to one's position in society, but rather that power and its uses are the issues," said Samuel K. Roberts of Columbia, a history professor who is also on the faculty of the university's Institute for Research in African-American Studies. "That being said, increasingly distinguishing between black Americans and black Africans may produce conditions in which we will be less prone to think of a fictional construct of 'race' as the distinguishing factor among all of us in North America."

How long might those distinctions last? "I guess one of the questions will have to be what happens in the next generation or two," said Professor Foner of Columbia. "In America, marriage is the great solvent. Are they going to melt into the African-American population? Most likely yes."