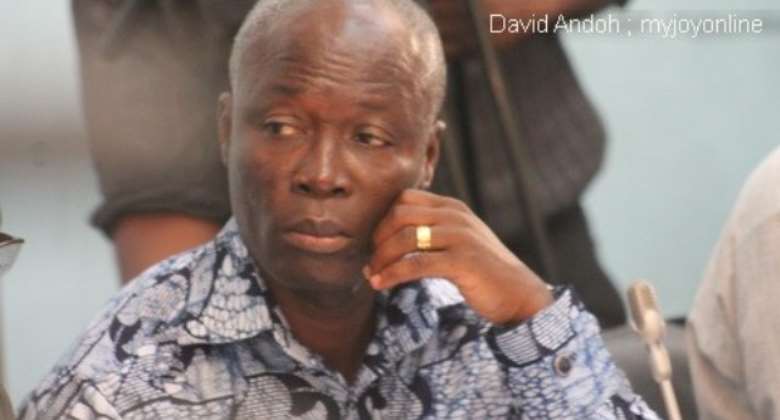 The public exhibition of ignorance by Ghana’s Minister of Youth and Sports, Nii Lante Vanderpuye (Nii Lante) is beyond pardon and gives the definition of inferiority complex a new low. It is very disturbing to see an individual of Nii Lante’s stature, somersaulted and catapulted into a position of national reverence, sink so low by publicly issuing an order that could easily be ignored. Very worrying is the notion that the said order has no enforcement option attached to it. It shows that Nii has no idea about the value of the position given to him. Very sad indeed.

Nii Lante ordered the GFA to use local players for a match against Rwanda, to cut down expenditure since Ghana had already qualified for AFCON 2017 for which the match was being played. He also feared injuries to the foreign-based players during the said match could not only undermine the players' spot in their respective teams but also hurt Ghana’s chances in an important World Cup Qualifying match against Egypt due in a short time. Nii Lante took the decision and announced it on radio and on WhatsApp platforms instead of officially communicating with the FA. The players were forced to pay for their travel expenses to come to the country after Nii Lante claimed that his outfit was not in a financial position to foot the bill.

Under normal circumstances Nii Lante’s position would be applauded but the timing and the medium through which they came make him look like a primary school bully. As the GFA said, Nii Lante had all the opportunity to raise these concerns after the Black Stars secured qualification for AFCON 2017. He did not have to wait until the FA wrote to the clubs to release the Ghanaian players for the match before making his suggestions. The decision came months late because foreign-based players had already been invited for the match.

Just as Nii issued his “decree” the Deputy Captain of the Black Stars, Andre Ayew called his bluff and paid for some of the players even though he was injured and not part of the squad while others found their own way to Accra rendering Nii Lante’s order useless. This was done to honor the match to prevent CAF’s ban and from other subsequent AFCON matches for which Nii Lante did not consider before issuing his order. According to FIFA regulations clubs must be given 14 days' notice before their players are called to the national team.

In an attempt to cover his humiliation by the players, Nii Lante went on record that “since they’ve decided out of their own volition to sacrifice for the nation by paying for their tickets, then they should be ready to take what we have for them as well” Did he not feel ashamed when he said "I also hope the players would not use it as an excuse to boycott any future match and hold the nation to ransom like it happened in Brazil." Was Nii Lante acting in the national interest or an attempt to show somebody where “power lies?”

Does he respect President Mahama, the man who appointed him to the position? Does he love Ghana? Does Nii Lante really like the ruling National Democratic Congress (NDC) of which he is a member? If he did he would not disgracefully resort to the Bukom/Kadjetia (below grade-level) approach of handling a major national issue. The major focus of a responsible national minister is to initiate, implement, monitor and evaluate policies for effective administration of his ministry. Such a person is above pettiness, micro-management and also all persons in the ministry in terms of authority. He acts on the advice and/or in consultation with senior members of staff.

The Ministry of Youth and Sports is bedeviled with a myriad of problems some of which include but not limited to: outdated national sports policy – “the need to fast track the Sports Bill which would seek to replace SMCD 54 OF 1976 regarding the various aspects of sports management, promotion and development in Ghana to bring to current international best practices, lack of infrastructure, lack of funding, corruption, lack of motivation and inefficient administrators.”

Since NDC came into power in 2009, Nii Lante is the Minister Number Eight for the Sports Ministry. One expected that with Ghana’s disgraceful record at the World Cup 2014 in Brazil, Ghana’s poor attendance and performance at Olympic Games since 2004, Ghana’s embarrassing appearance at the 2011 All Africa Games, failure of the Sports Ministry to honor its obligation to the national women’s team after winning gold at the continental level and a host of others, Nii Lante would be circumspect and approached his new portfolio with the view of restoring Ghana’s lost image at the world scene.

Disappointingly, Nii Lante seemed to have come into office without a plan of action to tackle the challenges facing the ministry hence his use of inferior tactics including bullying which by all intent and purposes go only to satisfy his personal interest. At his confirmation hearing before parliament Nii promised to make the national coach, Avram Grant, stay in the country as if that is a policy that would make Ghana great. No wonder Avram Grant ignored him when he paid unannounced visit to the Stars camp during a preparation for a national assignment.

If he respected himself, Nii Lante would not engage in irresponsible shouting contest with the personnel of the GFA. He is far above them. All he needed was an appearance of recognition of the persons involved and they would run to him. Did Nii Lante’s confrontation with the GFA result in Ghana defeating Rwanda; make the pitch at the Ohene Djan Sports Stadium look presentable to the visitors or helped the Black Stars to defeat Russia in a friendly on Tuesday (9/6/2016)? If Nii Lante as a minister would not take the lead in respecting his subordinates what moral right had he got to be respected in return? Respect is earned not demanded.

It hurts to observe persons appointed to responsible positions by the President of Ghana, John Mahama, spearheading the dragging of Ghana’s name into the mud. One expected that since their party is in power, NDC personnel would protect the dignity and aspirations of the country by leading exemplary lives, if not for anything at all, at least as a sign of respect for the President of Ghana who appointed them. Instead there is somebody like Nii Lante Vanderpuye cheerleading the squad of boorish, vainglorious and self-conceited egomaniacs snooting their inferiority complex on the periphery as if there is no tomorrow. Very pathetic