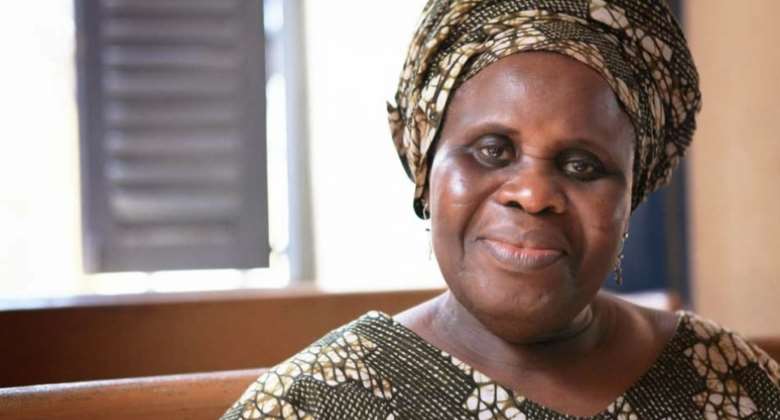 This week I wanted to write about the tidal waves sweeping along the coastal regions of Ghana from Keta to Biriwa, destroying canoes, outboard motors and in some cases destroying houses.

I understand the gods are angry with my people. The last time I spoke with one of the gods, he told me that Simpa Panyin has desecrated the sanctity of the coastal areas, hence the anger.

But I don't want Lydia Forson to come after me. That girl is something else oo. She fears no fall, she gave it to a whole Archbishop of Ghana, Archbishop Duncan Williams. She took down almighty Manasseh Azure, and last week she went for Franklin Cudjoe. Who knows her next stop, maybe if she gets to know that am one of the few Ghanaian men-victims of women who beat men, she will spare me.

Do you remember I told you some time ago that I don't talk when I have visited the blue kiosk? This has been the biggest fight I have had with you, Simpa Panyin, since you last settled in me, that you don't have to say anything if you don't have anything to say. Saying something by all means, when you know you don't have one or two things to say, sometimes makes you feel array, and could land you in such situations when you, in fact, say nothing to represent something.

The last time I spoke with Nana Ekua, popularly known as Mzbel, she said all manner of things. That beautiful girl can talk oo. She said all manner of things about the tango the two of you shared in the past, and how she markets her music, and so on, and even denied that you are the father of her son, even though she confessed to have gone inside with you in the past.

It is obvious that Mzbel is beautiful, so I am wondering whether you have checked if her songs are actually written by herself? Do you care checking the authenticity of her songs, or your authenticity checks are restricted only to certificates of beautiful Legon girls?

Simpa Panyin, you do all oo; how do you suggest that beautiful women with first class degrees offered themselves to men for their qualifications? By what metrics would you achieve your results? Or don't you think that you are creating unnecessary negative attention for our sisters and friends who are perceived to be beautiful?

My first daughter is a female level 200 University of Ghana student. Abena Annan is certainly beautiful. She switched from Science to French while she was in form two SHS, and still made very brave grades. She is looking as though she might achieve a first class, and she is likely to apply to work with your bank. Would you still subject Abena's first class certificate to checks?

Last week Fathia Karim, a female medical student of KNUST, swept 13 out of the 15 academic awards on offer. Do you wonder what world awaits Dr. Fathia Karim? How do you see this display of ingenuity? Do you still think she gave 'herself' for her performances, is that the reason why she got all the awards, or you think she is not beautiful enough?

If Fathia exchanged 'herself' for all these awards, then that will mean being 'charitable' to the over 20 different lecturers she encountered, semester by semester, throughout her studies in the university, spanning level 100 up to the seven years of university education. Is that what you are suggesting?

I have, lately, been thinking of my childhood friend, Georgina Araba Osei Ama Ata Aidoo. We were both born in the same village, Sankor, Winneba. I was born a male, and she a beautiful female. I was given the opportunity to play freely, amongst friends, boys and girls alike. I was able to climb coconut, mangoes, and I was able to feel a hero of myself, swimming and all.

She was a scheming target of all the boys, old and young, and they jubilated if they succeeded in their schemes. The boys felt heroic if they overpowered her. And if she complained, she is said to be a bad girl who acted wrongly to attract the boys.

One day she mastered courage to report her ordeal to the law enforcement agency in charge of supporting such victims. This poor unemployed girl was forced to pay “something” at the charge office for reporting her tormentor to the law enforcers.

Now the enforcer issued her with medical form to go to the hospital for examination, a requirement for a successful prosecution of offenses. She goes to the government hospital, wishing to take advantage of the Domestic Violence Act, that victims of abuse shall be examined, treated and a medical report written for free.

But she gets to the doctor, without any tests, except physical examination, she is asked to pay GH¢300 for the report to be completed. This GH¢300 is almost five months of her income. Obviously she is unable to afford, therefore she abandoned her pursuit for justice, and let her tormentor go unpunished.

Then she gets her first job, to work with a bank in Ghana. But because she is beautiful the 'Bank Major' says her first class certificate must be subjected to authenticity checks. He is reported to have suggested that beautiful women are unlikely to graduate from the university with first class degree if they did not offer 'something.'

So for instance beautiful women such as Hajia Samira Bawumia, Ms. Hannah Tetteh, Mrs Naadu Mills, Mrs Rebecca Akuffo-Addo, and many more, are not intelligent, and the only way they can achieve any good thing in life would be to offer 'something?'

This girl, through it all, craws, walks, and sometimes limps to become a lawyer, and becomes the boss of the Voting Commission.

This same woman, by dint of hard work, rose through the turbulent social-economic ranks to become a Supreme Court Judge, and to become the Chief Justice of Ghana, and then I started all over again.

First I started by, literally, saying that the Chief Justice was a cat that must be killed at all cost. Thereafter I began to threaten her with rape, and threatening her with death.

And a lawmaker who is supposed to know better, wrongly accuses her of being a whore, he accuses her of offering 'something' for her position, thereby undermining any achievement that she might have gained on merit, in spite of all the challenges in life.

In the end she scales through all these discriminatory practices, becomes a distinguished scholar of international standing. She wrote plays, poems, books, and for over 50 years she used her doubted intellectual capacity to impact society.

So a reputable university, arguably the most prestigious university of the land, the University of Ghana, through one of its reputable centers of research excellence, organizes an award ceremony, to honor her for overcoming all troubles and hitting the top.

Would you now agree with me, that there is no free lunch? That we will give you something, we will recognize you, but first you have to wear a man's heart; that you have to become a man in order to deserve what you deserve, you don't think so?

So because of a simple error in your name, you walked out on us (men)? Couldn't you have ignored that error? Since when did you forget that you are in this world, men's world; you walked out on men? Ama, your end has come…