Obinim lashed them, and so what? Stop the hypocrisy! 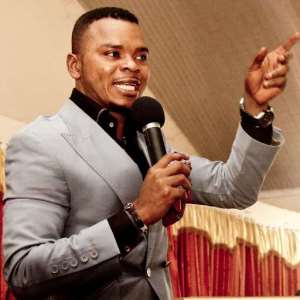 I agree, the argument about moral high ground is a reasonable one. He that is without sin should cast the first stone. So ‘arch-angel’ Obinim of International God’s Way Church may have committed adultery (allegedly?) with the wife of his junior minister and on that basis he should not have cast any stone at all, right? Okay, so while we are on the subject of sins and stones, can we discuss dispassionately, how we got to ‘sins and stones’ in the first place and where culpability must really be placed? Maybe, just maybe, if we refrain from the habit of flaunting our usual brand of hypocrisy, we can begin to do something about sins and stones in our society.

Pay attention According to Ghana Demographic and Health Survey (GDHS) report 2014, a nationally representative sample of 13,784 respondents (9,396 women age 15-49; 4,388 men age 15-59) drawn from 11,835 households were interviewed on various social and health issues. On the issue of sex, the percentage of girls within age bracket 15-24 who admitted to having their first sexual intercourse at age 15 years, were 21.5%, compared to 15.4% in 2008. By the time they (girls) get to 20years that figure had increased to 72.2% (see GDHS 2014, p.55). For boys within same age bracket (15-19 yrs.), 17.1% reported having their first sexual intercourse at age 15 years, a marked increase from 8.8% in 2008. By 20 years 58.2% of boys had had sex. Let me interpret in plain language. Here is what it means - increasingly, more of Ghana’s youth population between 15-24 years are having sexual intercourse (fornication, if you like) earlier than the legal adult age of 18years. And statistically the girls are more vulnerable than boys. Wait, am not done. Making a case for moral decay is not my only goal. Before I conclude I will attempt to persuade you that being incensed about corporal punishment should not cause you to overlook a much bigger problem.

Let’s review additional facts, shall we! According same report (GDHS Report 2014), the number of girls aged 15-24years, who had pre-marital sex within last 12months prior to the survey was 87.8% (8 out of every 10 girls had fornicated). For boys, 73.7% of respondents had sex within 12months of the survey. Out of those who had pre-marital sex 12 months prior to the survey, 6 out of 10 girls (60%) did not use condom, compared to 20% of boys who also did not use condoms. It should be clear to you by now why I take pains to disaggregate the data on the basis of gender. It is statistically proven that boys are more likely to have multiple sexual partners than girls (a ratio of 4 to 1) and therefore a greater burden of the disadvantages of immoral sexual behavior are borne by girls. If I had the time, I would prove to you that our growing social decadence correlates with education, economic opportunities and a general break down in our traditional cultural values that binds the young to the old in a spirit of accountability, truth and respect. So those who think that this issue is about religion and nothing more are sorely mistaken. It is as much a debate about the immorality of pre-marital sex as it is about public health safety and economic development. An HIV prevalence rate of 2.9% among the youth 15-24years is nothing to be toyed with. A study (Asamoah-Odei, Antwi and Dickerson, 1995) also cited by Bollinger et. al (1999) concluded, using data from Korle Bu, that the average life time cost of care for AIDS patient (in-hospital), is GH¢10,000. This was two decades ago. The cost has most likely escalated now.

This is why I am not interested in discussing the supposed hypocrisy of Bishop Obinim for casting the proverbial first stone. I am more interested in solving problems at the root level; a situation that requires sober reflection and deep-thinking.

By the way, whose fault is it? The Ghanaian church has failed us. Most churches, particular the new age Pentecostals and charismatics, are more interested in money-making and vain showmanship than developing Christian values in their members. The story of pastors sleeping with women in their churches have become so common it has ceased to shock our sensibilities. Our schools too have failed us. General school enrolment has gone up, sure! But 24.3% of women 15years and above (compared to 14.7% of males) have never been to school (see GLSS R6, p.12). And for those who were fortunate to attend school, majority (44.7%) never attained Middle School Leaving Certificate or B.E.C.E. The philosophy behind our economic policy agenda favors foreign investors more than local businesses, thereby creating an ecosystem where Ghanaian businesses struggle to thrive and to employ local labor. Our family system has broken down. Mum and dad leave for work at 7am and return by 7pm, all in a bid to put food on the table. Who will spend time to teach our teenagers and young adults about acceptable moral conduct and sexual chastity? TV and social media, that’s who! No wonder sex videos are in vogue on our university campuses.

This is the environment that has produced self-styled ‘Christopreneurs’ like Obinim and his cohorts. He (Obinim) is nothing short of an entrepreneur in the religious market selling hope to those who for same reasons, will pay above-market premium for hope. To take on Obinim for human rights abuse, for me, does not address the fundamental issue. Much as I do find his ways and craft to be anathema, his actions have or should provoke a conversation about sexual practices among the youth, parental control and church regulation. As for my ‘friend’ Bishop Daniel Obinim, the scripture in Mathew 24:28 is befitting.