Sad! Alhaji Adamu Iddrisu Left Us Without A Book 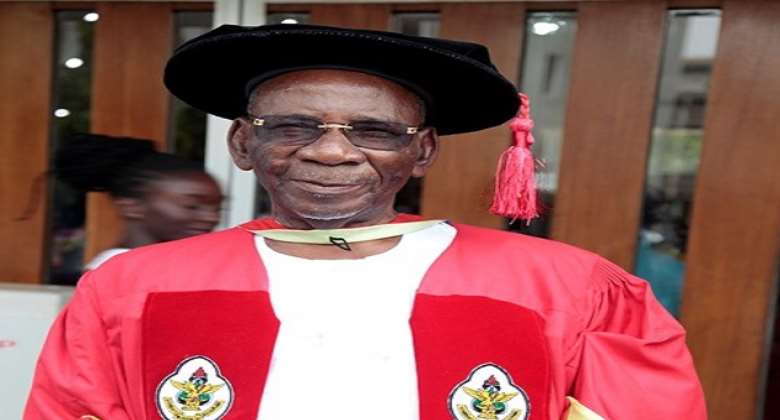 Yesterday, 27th July, 2016 Will Go Down In The History Of This Land As The Day Two Prominent Muslims Of The Land Woke Up On The Shores Of The Afterlife. One Was The Wife Of The General Manager Of The Greater Accra Islamic Education Unit, Sheikh Armeyao Shuaibu And The Other Was Alhaji Adamu Iddrisu, The Owner And Chairman Of Global Haulage Group Limited (GHGL). May Their Souls Rest In Absolute Serenity.

I was at the latter’s funeral gathering at the head office of Global Haulage Group Ltd at Achimota and I left there with a change in my usually lively and spirited mood. The sea of mourners with their attractively-packed cars, the melancholic countenances with an ambiance of sorrow and the surreptitious burial with its attendant quietness brought every activity to a tie-up. With a mere sight on the faces of mourners, one could sense the ejaculation of sorrow.

Everybody concurred on the decision to bury him privately in the edifice of his domicile. It would have taken hours of difficulty and everything will have ended in a gridlock. (Gridlock: The stoppage of free vehicular movement in an urban area because key intersections are blocked by traffic).

The death of Alhaji Adamu Global as he was affectionately called attracted high-profile personalities. The vice-president of the land, His Excellency Kwesi-Amissah Arthur was there to finally escort the remains of the great entrepreneur. The former President of the land, His Excellency John Agyekum Kufour was there and refused to move away from the sun when told to. He cited the fact that those praying for the dead body were also under the sun. That was when the final prayer for Alhaji Adamu was in session. Dr. Mahamadu Bawumia, Mr. Inusah Fuseini were among the top-notch individuals of the country who came to bid their farewell to the philanthropist. I described the death as “nation-stopper.”

I am not writing to inform anyone about this death. It’s already known. Far from that. I wrote this because I am peeved and seriously disappointed. That a great man of such status will die without something to glean from about the major decisions he took in his life that shaped him. A great entrepreneur of such standing should have a well-documented chronicle about his life.

Alhaji Adamu died at the age of 72. In his three score and ten life on earth, he founded the Global Haulage Company. According to the company’s website, “Global Haulage Company Limited is one of the most successful private transport entities in Ghana. The success of this company has been accomplished by virtue of the principles and beliefs fused into it by the Founder and Chairman, Alhaji Adamu Iddrisu. This is a man who demands HONESTY, HARD WORK and LOYALTY which he believes must permeate the entire business organization.

Global Haulage Company Ltd. operates throughout the length and breadth of Ghana and to other destinations in the West African Sub – Region. It evacuates 17% of the total national output of about 650,000 tonnes of cocoa from producing areas in the hinterland to in- land Take – Over Points and the two sea ports of Tema and Takoradi. It also transports commodities like lime from Takoradi to mining companies in West Africa and also steel products, fertilizer, chemicals, consumables etc. from the two sea ports to destinations within the country and the Sub – region.”

Alhaji Adamu has left us sadly and with nothing for the generations to come to read and understand the difficulties he had to overcome to become one of the most affluent men in our nation. We read about entrepreneurs and other great men from other parts of the world from books authored by themselves or others. They help us in one way or the other.

However, we need more of the lives of our successful ones to be written. It will resonate well with our circumstances here in Ghana. In that way, we can easily identify with the choices they made. The situation elsewhere can never be the same as in Ghana. We should be given the honor of knowing how they were able to make it in a land Mensah Otabil described as “poisoned”.

That will definitely inspire us and imbue in us the “confidence that through pluck and sweat and smarts, each of us can rise above the circumstances of our birth” as Barrack Obama stated.

Alhaji Adamu’s chronicle will have been a life worth-reading. To inspire and carry along the next generation of our entrepreneurs. A lot of the people who know Alhaji Adamu only know about the good times. They never knew about the turbulent period in his life. They never knew how he struggled to build such a business empire. They never knew how he rose from nowhere to be a recipient of the Millennium Excellence Awards. How he became the Greater Accra District Best Farmer in 1986 and the Greater Accra Regional Best Farmer in 1987.

They never knew about the two awards he received during the Africa International Awards in Tunisia in 1992, and two European Awards- Brussels in 1999 and Spain in 2003. A lot will never know either.

Chinua Achebe stated in Things fall Apart that “Looking at a king’s mouth, one would think he never sucked at his mother’s breast.” A lot do not see the difficulties Alhaji had to surmount to reach where he reached. In 1971, Global Haulage had only 15 vehicles. The company now runs over 230 trucks daily. It transports goods from the Tema and Takoradi port to Northern Ghana, Mali, Niger and other countries in the West African sub-region.

When the Kwame Nkrumah University of Science and Technology conferred an Honorary Doctorate degree on him in 2015, he said this to the Daily Graphic when interviewed “When many transport companies left Ghana in 1980 to seek greener pastures in other African countries, we stayed in Ghana to build this brand.”

The last time I had a chat with Abdul Salam Daaru, the CEO of Yaa Salam Publishers, we lamented the fact that we really have such paucity of writers and written materials as a people. He exhorted all of us to begin writing no matter how insignificant the subject is. Another brother of mine (Idris Gulo of the Gh Online Radio) left me speechless when he reminded me that the National Chief Imam’s life has not been documented yet. How sad!

The late Adamu Iddrisu was born at Old Fadama, a suburb of Accra, near the bubbling Agbogbloshie foodstuff market. Yet he has risen through the mill to a position where he is providing job opportunities for about 12,000 people in direct and indirect labor. The advice I have for his twenty-six children is that they should have even if it is a short story of their great dad documented.

To the youth, I leave you with my words. These words were captured in another piece I wrote. It is titled “Letter to Hassan: Ghana must write more.” It was published on Ghana Web on 5th July, 2014.

” When we say “Ghana must work again”, we are not only talking about the economy and governance. We are also not only talking about sports. Neither are we also talking about the manufacturing of aircrafts and rocket science. When we say “Ghana must work again”, it encompasses everything. Including that which consolidates our heritage as a people, everything that entrenches our position on the map of the world and everything that will make later generations proud of the well-documented history and lives of their successors. And writing will massively ensure that.” Thank you!

Inusah Mohammed.
[email protected]
NB: The writer is a Youth-Activist and a Student of Knowledge.