One Community, One Dam Policy is Key to Sustainable Agriculture Growth and Development in Ghana 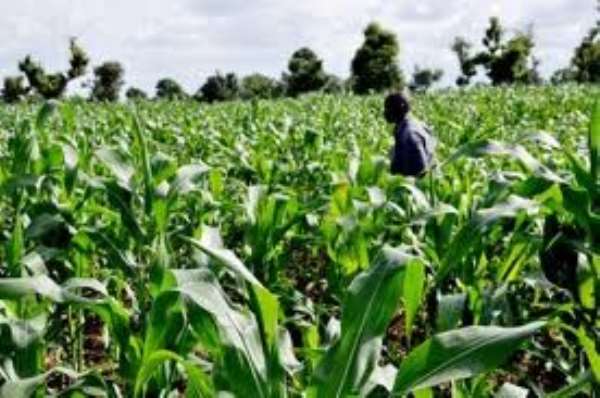 Ghana did not err when she jointly agreed with a group of African countries in 2003 under the Comprehensive Africa Agriculture Development Programme (CAADP) to allocate at least ten per cent of public budgets to Agriculture in order to achieve six per cent growth in agriculture. One of the many good reasons for the decision is that empirically, it is established that agriculture contributes faster to poverty reduction than industrial investment does. As a matter of fact, Agricultural spending has wider redistributive effect than any other sector.

In Ghana, research has shown that at the national level, agricultural public expenditures have the highest returns in terms of agricultural productivity. It is well established that for every one marginal cedi invested in agriculture, GH¢16.8 is returned. This is much higher than feeder roads and health where the returns areGhc8.8, and Ghc1.3 respectively.

In spite of this growing evidence of agriculture being the key in tackling poverty and transforming lives, the right amount of public investment is yet to be made in the sector. In fact, researchers and Think tanks including Africa Centre for Energy Policy (ACEP) have it that agricultural share of public spending in Ghana is less than 10 per cent . This is not only raising questions on the country’s commitment to the Maputo Declaration but also negatively affecting livelihoods. Though very sad, it is not surprising to hear that the 3.6 per cent agricultural growth target for 2015 was not achieved. This is likely to continue if the right policy measures are not put in place in the ensuing years to address it.

Fortunately, the country has very huge potentials to grow and develop agriculture to the desired level to accelerate development for improved livelihoods. There are enormous agricultural investment opportunities in the country particularly the Northern Savannah Ecological Zone which occupies over 50 per cent of the total land space of Ghana. The Zone has vast land for agriculture and could be targeted for total economic transformation of the country through agriculture.

According to the Ministry of Finance, If the production of tomatoes and rice alone were the focus of Ghana, the nation would have been saving US$400 million annually .Targeting the SADA Zone and other parts of the country with One Community, One Dam Policy for all year round cropping of tomatoes and rice and revamping the Pwalugu tomato factory and the Bolgatanga Rice Mill for agro-processing and value addition is the surest way and probably best policy option to help the country save the US$400 million annually and achieve sustainable macroeconomic stability.

There is no doubt that the introduction of One Community, One Dam Policy will undoubtedly increase food productivity and security, meet agricultural sector growth targets and fast-track the country’s efforts towards achieving the Sustainable Development Goals particularly the goals on eradication of extreme poverty and hunger.

Another justification for the introduction of One Community, One Dam Policy is that, research had proven beyond reasonable doubt that the upsurge of climate change is having a great impact on food production and a telling effect on food security in the Northern Ecological Zone of the Savannah Accelerated Development Authority (SADA).

History has it that in the 1980s the Upper East Region used to have rainfall in March and farmers could get busy on their farms by April. Those days, farmers got abundant harvests that enabled them to feed their families throughout the dry season.

But the question one may ask is that , is it the same situation today? Certainly no. The situation got worse after the 1990s when the region started recording rains in May and June. As if this delay is not enough, the rainfall pattern has also become erratic thereby affecting food production adversely and causing food security problems.

Nowadays farmers in the area , particularly smallholder farmers, find it difficult if not impossible to feed their families throughout the lean season which stretches up to five months in the year, before the onset of the next farming season.

The Upper East scenario cuts across all the ecological zones of SADA including the Northern, Upper West and Volta Regions, as well as some parts of Brong Ahafo Region.

The signs of climate change in the zones are becoming so alarming that if measures are not taken now, it would worsen the food security situation in all of those areas.

But then, there is hope for the area as stakeholders and experts at different platforms have made various proposals to help address the challenge. One of such groups is the youth and women farmers groups. The youth and women farmers groups at the just ended separate fora held in the Northern, Upper East, BrongoAhafo and Volta Regions drum home the need for One Community, One Dam Policy. This is welcoming and must be heeded by policy makers and any government in power.

The fora , organised by the Coalition of SADA Zone CSOs led by the Northern Patriots in Research (NORPRA) with support from the USAID was aimed at collating the inputs of the youth groups and women groups to be mainstreamed into the SADA Medium Term Development and Master Plan which is expected to be finalised in July 2016

At the said fora, the youth and women groups in their communiqués, stressed the need for SADA to facilitate to ensure that government construct more dams, dugouts and rehabilitate and drain old dams in the Northern Ecological Zone of the SADA to help harvest rain water on a grand scale during the rainy season for dry season farming. .

The groups noted that the dams and dug-outs would not only help to harvest rain water for agricultural activities particularly in the dry season, but would also help curb the annual floods that occurred in the area every year during rainy seasons and the spillage of the Bagre Dam in Burkina Faso.

“These water reservoirs could be used during the long dry season to provide livelihood opportunities for the peasant farmers. It will also prevent the youth from drifting to the south in search of non-existent jobs”, the groups observed in their communiqués.

These recommendations by the youth and women groups must not be ignored. There is the need for SADA to facilitate the construction of more dams and dugouts (or water reservoirs), rehabilitate old ones as well as de-silt the existing dams that have been silted as a result of human activities.

If these pragmatic measures are taken not only would it help harvest water for all-year-round farming, particularly dry season farming, but would also help deal with the perennial floods in the area.

It would particularly take care of the large volumes of water that usually engulfs the Region whenever the spillway of the Bagre Dam in Burkina Faso is opened, thereby saving human lives, animals, farmlands and other valuable properties from destruction.

Rainwater harvesting is the accumulation and deposition of rainwater for reuse on-site, rather than allowing it to run off. Its benefits include the availability of water for gardening, for livestock, irrigation, domestic use (with proper treatment), and indoor heating for houses.

In many places the water collected is just redirected to a deep pit with percolation. Rain water which is a resource from God must not be allowed to go waste whiles we wallow in hunger.

All stakeholders, particularly government and SADA, should take it upon themselves to look for investors and go into public-private partnerships to tap rainwater to boost food production.

Many countries have relied on rainwater as supplementary sources for development. Currently in China and Brazil, rooftop rainwater harvesting is being practiced for providing water for drinking and other domestic uses, livestock farming, small-scale irrigation, as well as means of replenishing ground water levels.

Guangzhou province in China and semi-arid north-east Brazil has the largest rooftop rainwater harvesting projects ongoing. In Bermuda, the law requires all new residential constructions to include rainwater harvesting adequate for the residents. The U.S. Virgin Islands have a similar law.

In Senegal and Guinea-Bissau, the houses of the Diola-people are frequently equipped with homebrewed rainwater harvesters made from local organic materials.

In Beijing (China) some housing societies are now adding rain water in their main water sources after proper treatment.

In Ireland, Professor Michael McGinley established a project to design a rain water harvesting prototype in the Bio-systems design (Challenge Module) at the University College of Dublin.

All these are lessons for Ghana and particularly for the private sector, to learn and adopt to earn income while at the same time contributing to positive change.

There is however the need to empower communities in the SADA zones to undertake activities including river bank protection, compost production , stone bonding, nursery establishment and provide support for them to go into livestock production to protect buffer zones to enable rivers and lakes harvest much water, as well as provide habitat for wildlife and to prevent floods

Already the Environmental Protection Agency in collaboration with MOFA and Water Resources Commission, under the Ghana Sustainable Land and Water Management (SLW) and the Ghana Environmental Management Project (GEMP), with funding from the World Bank and Canada are already empowering communities in some of the Northern ecological zone

Seeking the view of the Coordinator of the Coalition of SADA Zone CSOs and Executive Director of the Northern Patriots in Research and Advocacy (NORPRA) , Mr BismarkAyorogo Adongo, he stressed that there is the urgent need for effective collaborative by all stakeholders in the northern ecological zone to help tap rainwater for agricultural production to ensure food security and help fight climate change.

He indicated that the call by the Youth and Women groups on the “ One Community, One Dam Policy” is Key to Sustainable Agriculture Growth and Development in Ghana and must be embraced by all including policy makers , the government and the private sector. SADA , he noted, should consider capturing these very noble views of the Youth and Women groups in its Medium Term Development which is being planned this year and to be implemented in the ending years.

This , he noted, would also help facilitate all year farming in the SADA Zones, but would help address the problem of animals not getting water to drink during the long dry season and also for house chores and building of houses which often being undertaken by the communities in the area in the dry seasons .

To sum up, there is no doubt that “ One Community, One Dam Policy” is the Key to Sustainable Agriculture Growth and Development in Ghana, particularly the Northern Savannah Ecological Zones. The proposal made by the youth and women groups and CSOs in the SADA Zone must be considered by SADA in the preparation of its Medium Term Development Plan and Mater Plan. SADA and Government must be seen facilitating the process by encouraging local public-private partnerships and also going into partnership with foreign investors to help the construction of more dams and dugouts as well as de-silting old ones a reality. This in no doubt would help accelerate the transformational agenda and help Ghana to make significant gains in the achievement of the Sustainable Development Goals.