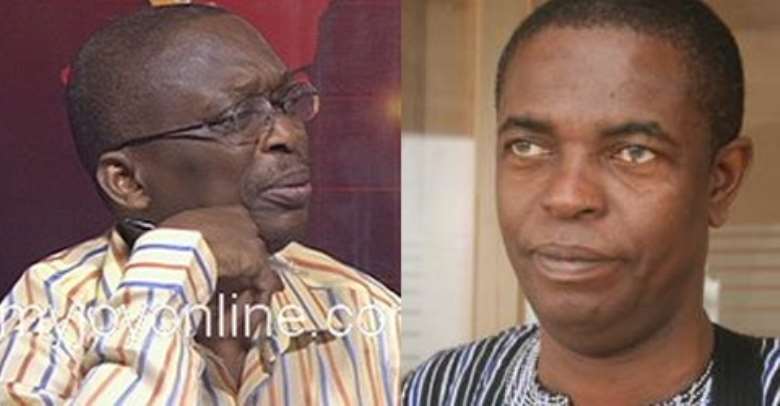 Managing Editor of the Insight Newspaper, Kwasi Pratt Jnr. has showered a litany of praise on his one-time best friend, Kwaku Baako Jnr. for his ‘ stance’ regarding the alleged bribery scandal ‘cooked’ by Joy FM’s Investigative Journalist, Manasseh Azure Awuni.

The stance taken by Kwaku Baako, in his opinion was “the beginning of what we have been looking for in this country for a long time” and for that singular instance, “…I salute him for the stance he has taken.”

President Mahama, in a latest investigative piece by Joy FM’s investigative Journalist, Manasseh Azure Awuni received a gift of a Ford Expedition from a Burkinabe Contractor, Djibril Kanazoe (who described President Mahama as a friend), which some opposition party activists claim amounts to bribe and has therefore called for his immediate resignation.

Meanwhile, Government through the Minister of Communication, Dr. Omane Boamah has confirmed that a Burkinabe contractor indeed offered a vehicle as a gift to President John Dramani Mahama in 2012 and explained that the said vehicle has been placed in the vehicle pool at the Presidency as per established convention.

Many anti-corruption campaigners, as well as some civil society organizations, have slammed President Mahama in what they say is his blatant disregard for anti-corruption guidelines in the country.

According to him, for the great lengths he (Manasseh) went to, in order to get to the bottom of the matter is commendable, but the attempt to link the issue to a bribe could have been better packaged.

The veteran Journalist, who was speaking on Metro TV’s Good Morning Ghana show on Thursday, explained that Mr. Azure Awuni could have taken his time to apprise himself with the full facts of the matter before rushing to the public with the documentary.

"Checks from an authentic source indeed confirms that the President is not using the car for his personal comfort" and that, as indicated in the Communications Minister's statement, "it has been added to the fleet of cars at the presidency” He added.

In Pratt’s view, the “honest stance” taken by Mr. Baako is a positive development for the nation.

“When this case broke, my friend, Kwaku Baako; Malik Kwaku Baako, was one of the first people to say that, look, people are chasing a mirage. I salute him for the stance he has taken.” He echoed

The ace Journalist bemoaned the situation where political party functionaries would always try to see the gloomy side of events without an iota of objectivity. This trend, according to Mr. Pratt is a negative antidote for the country's forward movement effort.

Mr. Pratt sees nothing wrong with President Mahama receiving a gift from a Burkinabe contractor, who happens to be President Mahama’s friend. According to Mr. Pratt, the circumstances surrounding the gift does not in any way constitutes a bribe. Never!

The fact that everything about the gift was not shrouded in secrecy, and were indeed documented buttresses his argument of no case of bribery on the part of the president. “What kind of bribe is documented?” He retorted.

Besides, Presidents around the world including President Barak Obama of the United States of America (USA) have had gifts; therefore, he sees absolutely nothing wrong with Mahama receiving gifts. “In fact, President Obama, for instance, last year received gifts over 3. 6 million dollars.” He said.

He dismissed claims that President Mahama has compromised his integrity by accepting a gift from his Burkinabe friend.

To buttress his argument, Mr. Pratt claims both President J. J. Rawlings and J. A. Kufuor did receive gifts in their capacity as presidents.

“In recent history, we do know, for example, that President Rawlings received gifts, including the payment of school fees for his children who were studying abroad. Would we consider that as bribery?

We do know President Kufuor received gifts including the gift of an armored vehicle. Was that a bribe? He continued. “It is a legitimate question we need to answer in order to arrive at the conclusion as to whether it was a bribe or not. “ He stressed.

The question of whether what the president received from his Burkinabe friend constitutes a bribe or not was neither here nor there.

He has therefore praised Mr. Kwaku Baako, Hon. P. C. Appiah Ofori of the NPP and Ivor Greenstreet, Convention Peoples Party’s presidential candidate for being honest in their analysis of the allegation.

In the case of Mr. Ivor Greenstreet, Mr. Pratt said, he has brought credibility to the camp of the CPP since being elected to the position of a presidential candidate. He eulogized Mr. Greenstreet for his sincerity and honesty and has, therefore, called on members of the party to cease fighting their leader in public for his stance regarding the alleged bribery scandal being erroneously levelled against the president.

He urged party supporters to support the Mr. Greenstreet in his quest to turn the fortunes of the party around.

Mr. Pratt, however, encouraged Ghanaians to criticize president Mahama severely should he go astray in the performance of his constitutional mandate since he is an employee of the country.

“When the president goes wrong, it is our duty as citizens to criticize him severely. The president is our employee. And if he is not doing his work well we have to punish him well. But for goodness shake, when there is nothing, don’t let’s try to create something”