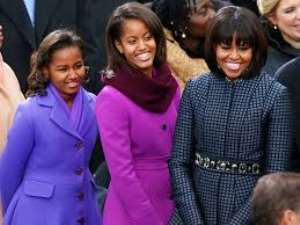 U.S. First Lady and Harvard trained lawyer, Michelle Obama, the Obamas’ daughters, Malia and Sasha and their grandmother, Ms. Mariam Robinson, included Liberia in their “Let Girls Learn Initiative” tour across the globe with a few hours stopover in Liberia. Mrs. Obama’s stopover in Liberia is not a celebration of President Ellen Johnson-Sirleaf’s leadership, or our Liberian mothers, aunts, sisters, nieces and daughters, but a moment of sympathy with all Liberian women and girls for the inhumanity and neglect they have and continue to face in the country, especially under the corrupt government of a fellow woman.

The U.S. First lady’s visit/stopover in Liberia is truly a sad day for Liberian women and a challenge for all the women in Africa that had looked up to Liberia and Liberian women in the struggle for equality in everything, including education. It is also a sad day to see the suffering of Liberian girls because Mrs. Obama believes in education and the power of women to make a difference in the lives of families, communities, and even in the development of a country.

The U.S. First Lady believes and is a living testament that education can make a great granddaughter of a slave and the grandson of an African cattle herder to become the most powerful couple and leaders of the world’s most powerful nation. Moreover, it is a sad day because as an African-American, Mrs. Obama shares something in common with Liberia, a nation founded by free slaves from the United States and a nation which first president (Joseph Jenkins Roberts) and subsequent presidents after Roberts, were U.S. citizens.

The U.S. First Lady’s stopover is equally a sad day because Liberian women have stood the test of time and have been the torchbearers of women’s equality and advancement in the history of Africa. Liberian women have also broken barriers in Africa that other African women are following. From producing the first and perhaps the only African woman to head the United Nations General Assembly in the days when segregation and apartheid were alive and well and ensuring leadership of an interim government in the mid 1990 in the midst of male-dominated warlords to setting a historic record of paving the way for the continent’s first female democratically elected president, Liberian women have always led on women’s role and contribution in changing Africa and our world.

Yet, our Liberian mothers, sisters, daughters and nieces are among the poorest, most abused, most marginalized and the most educationally deprived people in the world today. All this is happening not under a male ruler, but under a woman president, who, unfortunately, runs an administration that is the most corrupt government in Liberia’s history, since 1847.

The resolve and contributions of Liberian women is beyond compare. Angie Elizabeth Brooks , the only African woman to become president of the UN General Assembly showed and channeled the inner capacity of what it means to be a Liberian woman. Ruth Sando-Perry amassed the energy and support of Liberian women to serve not only as interim president of Liberia during war time but as the first woman head of state in Africa. Ellen Johnson Sirleaf , the 24th and current President of Liberia , achieved her childhood ambition of being president and Africa’s first democratically elected head of state because our mothers, aunts, sisters, nieces and daughters sacrificed to ensure that a woman was elected in 2006 in post war Liberia. Behold, that choice and experiment in 2006 was the biggest mistake of their life, and the most unthinkable venture our nation has ever undertaken. It was and is a mistake because Liberian women and girls put forward a woman who just does not care.

It turns out, our mothers, aunts, nieces and daughters, by their actions and determination, were turning Liberia backward instead of forward; they were paving the way for the most dangerous corruption-infested administration and public theft ridden society than they had ever imagined; they were preparing their subjugation and bridge to transgenerational poverty, disease and abuse than they had thought; they were depriving themselves of enlightenment, power and social equality than they realized; and above all, they were denying their children the precious element of success in life: Education.

It is important to note that education is essential and Liberian women have always believed in the power of education. They know that investing in education can yield significant development and social benefits. Unfortunately, their society is mitigated and suppressed, their government is corrupt and inept, and their president, who happens to be a woman, just does not get it.

According to the Global Partnership for Education, a respected global nonprofit and think tank, “Education reduces poverty, boosts economic growth and increases income. It increases a person's chances of having a healthy life, reduces maternal deaths, and combats diseases such as HIV and AIDS. Education can promote gender equality, reduce child marriage, and promote peace. In sum, education is one of the most important investments a country can make in its people and its future.”

In Liberia and under the Sirleaf-Unity Party-led administration, paying cronies, loyalists and praise-singers between US$6,000 to US$15,000 monthly under the pretext that they are bureaucrats why teachers, nurses, firefighters, soldiers, police and immigration officers earn less than US$150 a month is good governance. Also, in Liberia, enriching a few people at the expense of the entire nation and a population of 4.5 million people is progress. And, traveling the world to collect accolades under an arrangement by paid western public relations firms remains a tradition and a sign of international acceptability and connection.

This is the kind of leadership and governance system that make it hard for Liberian girls to have the opportunity to learn. This is the pathetic system and struggle that Mrs. Obama and the Obamas’ daughters will sympathize with in Liberia during their few hours stopover. But watch this! Our leaders will tell their followers that the U.S. First Lady stopover in Liberia is due to their connection and global leadership. Really??? Everything, including falsehood, must have a limit. And, Mrs. Obama’s visit should be no exception. Our leaders must tell the truth about this stopover of the U.S. First Family. The First Lady is stopping over in Liberia for Liberian women and girls. Nothing more nothing less!

Mrs. Obama’s stopover in Liberia is equally a sad day for Liberian women because our country has moved from being high-jacked by notorious warlords to being depressed by shameless rogues who audacity to steal has no limits. Every facet of the Liberian government is infested with corruption, abuse of power and naked theft of public funds. The Obama’s daughters, Sasha and Malia, will wonder in being in a land that had its first and independent president a U.S. citizen and many presidents subsequent. Yet, 85% of homes in Liberia lack lavatory.

The Obama’s daughters will also be shocked to know that our country’s current president is a woman and yet the most victimized, deprived, poverty-stricken and unemployed persons in Liberia are women and girls. They will equally be surprised to learn that corruption, shameless public theft and bad governance are forcing Liberian girls from seeking education into prostitution as well as in early and forced marriages.

"The students' failure did not come from the university, but rather from the schools that prepared them. The result is alarming," Sirleaf said in a statement late on Wednesday.

"It tells me that the educational system is a mess."

Like every one of us, the Liberian president knows very well that girls in Liberia constitute the highest percentage of students who receive the poorest education in the country and in West Africa in general. While this is as a result of several economic and social factors, our president knows that our schools have ill-prepared teachers, and are poorly equipped, if not deplorable, at best. Our president knows that our schools will never attract qualified teachers and educational administrators when teachers and educational administrators are paid staving wages, and when corruption and public theft are unpunishable for the well-connected who steal millions while only punishable for struggling tax collectors, poor police and immigration officers and the political foes of the power that be.

The Sable Mining bribery saga and the National Oil Company of Liberia (NOCAL) broad daylight squandering of millions of dollars are a case in point of the president’s and her Unity Party’s government double-standard fight against corruption. How will our country have a better educational system under such calamities? The shameless part to Liberia’s “educational mess,” to quote our president, is that the president allowed her grandnephew from an Alaska high school in the United States to lecture Liberian policy makers about oil drilling while senior students majoring in geology and other earth sciences at the University of Liberia could not. Even though her grandnephew did not know what the hell he was talking about, the fact is, the president knew how poor our educational system is in Liberia so she would prefer a poorly performing high school student in the U.S. than a college senior in Liberia.

The president also knows that her Unity Party’s administration’s salary structure or system is apartheid in nature, or one that dwells on segregation, solely bent on making few unprofessional and non-visionary clowns wealthy. Like past lip service attempt and false promises, the president promised to do something about those crazy compensation system but yet failed to act. She appear to deliberately refuse to provide a moral leadership to this wrong. Besides, her administration has repeatedly spent millions of dollars on unnecessary travels, Per Diems and other frivolous activities while our nation’s educational system rots.

In addition, our president knows that many, if not all, of the so-called officials in her government frequently send their children and relatives overseas (the U.S., UK, Canada, India, Ghana and Nigeria) for medical care and education, mainly higher education. In fact, while our public medical institutions lack equipment and trained medical professionals and while the University of Liberia lacks trained and qualified professors, lecturers, material and equipment due to the government’s lack of objective priorities’ setting in addition to corruption, our officials and government provide scholarship to a chosen few to attend Harvard and other universities in the West.

When one bridges all of these factors together, there is a realization that First Lady Michelle Obama and team visit/stopover to Liberia is not a recognition of Liberia or the Liberian leader. Neither is it a celebration of Liberian women and girls. Rather, it is an attempt and goodwill on the part of the United States’ First lady to sympathize not only with the struggles of our mothers, aunts, sisters, daughters and nieces in a country that is regretfully ruled by a woman who happened to be graduate from Harvard University’s one-year tutoring capstone program under which ‘degrees’ are given. Mrs. Obama’s stopover in Liberia to see the poor condition of Liberian women and girls and their educational deprivation is equally a sign that the world knows how the Liberian government under Africa’s first woman president has failed miserably.

This is why First Lady Michelle Obama and daughters Liberia’s stopover is a solidarity with struggling Liberian women and girls that are living under a woman president of Liberia.

About the Author: Jones Nhinson Williams, a Catholic educated philosopher and an American trained public policy professional, who initially studied for the Catholic priesthood has since 2003, devoted his life, work and passion to issues of corruption, poverty, refugee flow and forced migration, the environment, job creation and governance, and the rule of law in Africa. He can be reached at [email protected] .