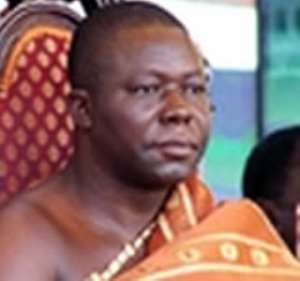 It may interest you to know that I speak for the silent majority of Asante people both home and abroad. Countless number of Asantes disappointedly believe you're dubiously selling many of the vacant stools in Ashanti region to promote your insatiable quest for making quick and easy money since you became Asantehene in 1999. In other words, you're well known for quickly agreeing to accept an individual to become a paramount chief in Ashanti region regardless of how well-qualified the candidate is as long as the person is the “highest bidder” in terms of greasing your hands with money.

Nana, before getting into the details of the shameful developments unfolding under your watch as the supreme king of the Asante people, let me try to contextualize as briefly as I can what has immediately precipitated the need for my open letter. This letter is specifically about the Bantama chieftaincy. You may recall that in 2002 Bantamahene Baffour Awuah V died and was succeeded by Baffour Asare Owusu Amankwatia V, known in private life as Mr. Ben Kwadwo Owusu Asare, who also happened to be the eldest son of the late Mr. A.A. Owusu (Baffour Owusu Amankwatia IV) who passed away in the early 1980s.

Before the “enstoolment” of Ben Kwadwo Owusu Asare as the Bantamahene in October 2002, you Nana Asantehene made it crystal clear to all the Gyasefuo (kingmakers) in Bantama that you wanted the next chief of Bantama to be an individual born while his father was at the time the occupant of the Bantama stool—traditionally known as the Puduo stool. To wit, you stressed forcefully that you wanted no one but a “Puduo child” to become the chief of Bantama. You pointed out that the immediate two past occupants of the Bantama stool were arguably not directly of “Puduo extraction.” In addition, you claimed you wanted someone who always serves and frequently contributes to the upkeep of Bantama palace.

Specifically, that was the impression you created in 2002 during the Bantama chieftaincy selection process. But, it turned out to be “lying lies” on your part in that at the end of it all you bypassed one of the two main contenders who met all the criteria you unambiguously said you were looking for. Instead, you chose Ben Kwadwo Owusu Asare who wasn't “Bantama Puduo stool son” in a true sense of the word. The late Ben was born long before his father became Bantamahene in the late 1960s.

Justifying why you Nana Asantehene made the sharp u-turn decision in accepting Ben Kwadwo Owusu Asare, you were quoted as saying you bowed to the persistent pressures and threats, among others, from your own mother who is also the Queenmother of Ashanti. I'm curious, why would your mother push you to make a wrong choice if you were not a willing participant? What kind of decision-maker are you, then? Well, I will leave this one for your inner conscience and whatever deity you believe in to sort it out.

Nana, let me fast forward to this year—2016. Somewhere in the early part of this year, Bantamahene Baffour Asare Owusu Amankwatia V (privately known as Mr. Ben Kwadwo Owusu Asare) died. If I'm not mistaken, you were in faraway South Africa when probably the news of the death of Kumasi Krontihene (Bantamahene) reached you. It is widely known that while you were in South Africa some prominent Ghana/Kumasi-based business men ostensibly on business trip in South Africa but came to curry your favor paid a “courtesy” call on you. During the interactions in South Africa, one of the guests—Mr. Sylvester Asare Owusu—was said to have brought up the unfolding Bantama chieftaincy affairs regarding the sudden death of his brother Baffour Asare Owusu Amankwatia V, including who you Nana Asantehene would want to become the next Bantamahene. Whatever you said in response in South Africa was best known to you.

Making the long story short, now you have just accepted Mr. Sylvester Asare Owusu (your personally-appointed former CEO of Asante Kotoko Football Club) to become next Bantamahene. Prior to his selection, you vehemently stated on numerous occasions to your advisers and to all the Bantama kingmakers that they risk huge disappointment if any of them took money /bribe from anyone because the person you wanted this time must be “Puduo ba” (a child born when his daddy was Bantamahene at the time). You also said whoever you wanted as Bantamahene at this point was already at the back of your mind and that person happened to be “a well-educated guy.”

Based on your utterances and stated criteria, it came as a shocker to many level-headed Asantes and Bantama Palace watchers when you quickly reversed course and just chose Mr. Sylvester Asare Owusu over the true “Puduo ba” in the race for Bantamahene. You're perfectly aware that particular individual (and you know who that person was) is the only “Puduo ba” between the two main contestants to the Bantama stool.

Nana, why is truth elusive in almost all Ghanaian society today? The guy that just bypassed may not be as wealthy as the late Mr. A.A. Owusu's siblings, but he is a critical thinker and an academic with chains of university degrees both from Ghana and the United States. More important, he always contributed financially in support of the servants living in Bantama Palace as opposed to Mr. Sylvester Asare Owusu who hardly visited the palace let alone help in monetary terms. Between Mr. Sylvester Asare Owusu and , the person you forgo again was the only one who was born, raised, and went to school in Bantama. He knows Bantama inside and out. What else do you want in a candidate…money? I guess so.

As happened in 2002 when Bantama elders were looking for a successor to Nana Baffour Awuah V, you said one thing and did entirely different thing. As indicated, at the time you claimed you wanted “Puduo ba” which led one guy who fits that “Puduo ba criterion” to stop everything he was doing in the USA and flew down to Ghana to enable him contest with Ben Kwadwo Asare Owusu. Irrespective of the assurances from you, yet you “mysteriously” ended up selecting the latter because you said it was your mother's pressure. Wow!