The First Poor Sign Of A First-Class Akufo-Addo Government Emerges!! 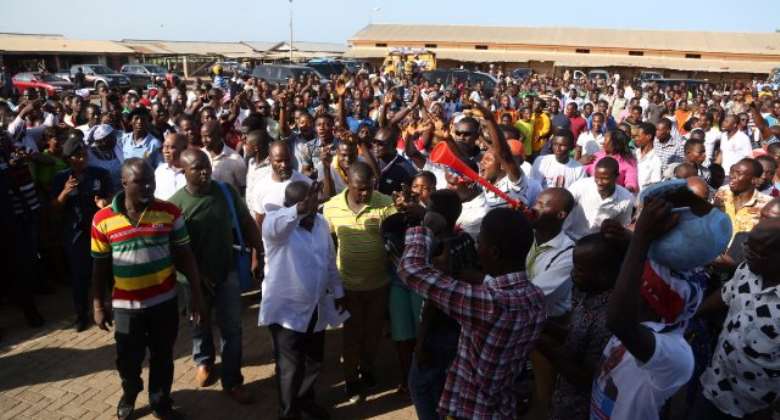 Folks, when the NPP’s Akufo-Addo told Ghanaians that he had the men to provide a “first-class government” for the country, some of us laughed ourselves lame because we knew he was only blowing hot air to sustain his self-deceptive quest for the Presidency. The men? From where? And a first-class government? In Ghana? Absolute fiddlestick!!

Have we not been vindicated all too soon? As reported, Akufo-Addo has given us the clearest glimpse so far to confirm our pessimism. He has named Alan Kwadwo Kyeremanten as one of the people who will run the Ghanaian economy if he is elected president. Addressing the chiefs and people of Akatsi North during his four-day campaign tour of the Volta Region, Akufo-Addo said the NPP boasts of competent people who are going to stand and do the right job in running the country. (See http://www.ghanaweb.com/GhanaHomePage/NewsArchive/Alan-Kyeremanten-to-run-economy-in-Nana-Akufo-Addo-s-gov-t-440893 ).

And Kyerematen is the first “competent” person to present to Ghanaians? Tweeeeeeeeeaa!! A lot is already known about Kyerematen, which can be traced back to Akufo-Addo himself and the team of damage-doers that he engaged to deflate Kyerematen to the marrow. The flaying done to him left him virtually naked in the public sphere; and that nudity reveals nothing but a damn useless Kyerematen not fit to be given any role in government.

Will we so soon forget how Kyerematen lost the bid to head the World Trade Organization (formerly the GATT, General Agreement on Trade and Tariff)—or whatever it may be called now? We monitored everything and got to know how despite the massive support given him by President Mahama, he lost. His own NPP people had hurt his Achilles’ heel so much that all he could do was to limp pathetically to the final lap.

The world doesn’t have any regard for limpers when sprinters with credible credentials are pushing the button. He lost the bid and has not rebounded into any credible public office. Yet, he contested Akufo-Addo for the NPP’s flagbearership position only to be torn apart because his opponents easily amassed forces to dent his record. They ditched him for Ghanaians to know as such. Is it now that he will be whitewashed by the very detractors to be accepted as a solver of economic problems?

I wish Akufo-Addo and his damage-doers will revisit their campaign of calumny against him to come to terms with reality that once so damaged, Kyerematen cannot win the confidence of the people to shine any light on Akufo-Addo himself.

In effect, then, rushing to present Kyerematen this way only darkens the sky for Akufo-Addo himself. After all, the announcement is pre-mature, misplaced, and irrelevant at this time. Politically, it aggravates Akufo-Addo’s standing, creating the impression that he is impulsive and bent on projecting Kyerematen only to do damage control. It means that Akufo-Addo is using Kyerematen as a bargaining chip to claw back the goodwill that he has lost from Kyerematen’s constituency. I say so with direct reference to the factionalism tearing the NPP apart on the basis of the Asante and Akyem dichotomy.

Informed people know what I am saying here. Those not informed should know that the factionalism in the NPP is traceable to the Akyem end, led by Akufo-Addo, and the Asante part attributed to ex-President Kufuor and his backers (including Kyerematen). Those denying the existence of this schism are deceiving themselves and throwing dust into the eyes of the party’s buffs. It won’t salve their conscience or help the party’s cause. The earlier they go for the bull’s horns to tame it, the better chances are that they will get some kind of traction to facilitate their electioneering campaigns. They deny it at their own peril.

Akufo-Addo’s rush to assign Kyerematen this responsibility is only an ego-massaging move that has the tendency to backfire and cast more doubts on his own capabilities. Kyerematen is well-known for what he is, whether as a politician or not. Let me just give an inkling into it all to set the tone for my arguments.

When he challenged Akufo-Addo for the flagbearership of the NPP at Elections 2008 and 2016, a lot was splashed on him from within his own NPP camp to reinforce poor impressions about him. Of course, having failed at EMPRETEC and Kufuor’s Presidential Special Initiative (PSI) on cassava/starch and grasscutter, there was little doubt left in our minds that Kyerematen is good only in his looks!!

And the sustained campaign of calumny ditched him a lot, which explains why he has been low-lying much of the time only to rise up to do his handlers’ bidding whenever needed to create the impression that he and Akufo-Addo aren’t at each other’s throat. That jingoism won’t settle matters.

The long-held opinion that Kyerematen belongs to the anti-Akufo-Addo Kufuor faction and the coining of an “Agenda 2020” for his political good is still doing the rounds, raising the stake of suspicion in the NPP. If he is toeing Akufo-Addo’s line, he is doing so because he is not his own man. He is at the beck and call of those power brokers in the NPP seeking to assign him a frontline role to put Akufo-Addo in power for their own good. In truth, then, Kyerematen is merely being used to run a fool’s errand, one of which he has too quickly and rashly aired (“If you want to feel good about your life, vote for the NPP.” See http://www.ghanaweb.com/GhanaHomePage/NewsArchive/Alan-K-promises-cash-in-pockets-under-NPP-440963 ). Nothing can be more hollow than such claims made on impulse.

Folks, there is a lot more to emerge from the NPP camp to set teeth on edge. I will wait impatiently for it and make my voice heard as such. But for now, let me tie everything together to say that recycling known failures to assign responsibilities that they are incapable of handling will not solve Akufo-Addo and his credibility problems. So far, nothing has emerged to prove that he has learnt any useful lesson from the factors that doomed his two previous attempts at becoming Ghana’s President. It takes more than mere sentimentalism and impulsive knee-jerk reaction to issues to win the hearts and thumbs of voters.

The interesting snag here is that even at the forum where Akufo-Addo projected Kyerematen, he failed to know that he and Kyerematen were not on the same page in their political pursuits. While Kyerematen was condemning the use of development projects for political advantage, Akufo-Addo was busily highlighting that aspect of governance for leverage. That explains why he stooped so low as to promise to tar the road leading to the Klikor palace. This disconnect between Akufo-Addo and Kyerematen is obvious for intelligent analysis on what the NPP stands for as far as Akufo-Addo’s hollow talk of forming a first-class government for Ghana is concerned. This disconnect alarms voters!!

Bring on Kyerematen and the other known failures and your politicking will fetch you what you are sowing, Mr. Akufo-Addo!! Why is he even rushing to announce a future Cabinet when there are better issues to inform the electorate about? Why the rush Akufo-Addo himself hasn’t been able to assuage doubts of his own inadequacies as a leader? The horse will only jump into the cart that he is putting before it, and there will be no movement toward the Presidency. Way to go, Akufo-Addo!!