What Do You Say, Mr President? 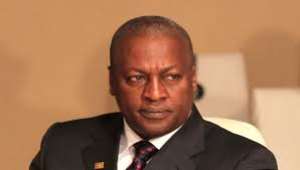 The President of the Republic of Ghana, Mr John Dramani Mahama does not seem to rule over Ghana anymore, but a section of the country because he does not seem to be bothered by some very disturbing trends at the present time.

Firstly, the rather divisive and extremely daft effusions by the former Minister of Transport, Mrs Dzifa Atovor, have been rightly condemned by sections of Ghanaian society and the main opposition New Patriotic Party (NPP). However, the General Secretary of the ruling National Democratic Congress (NDC) and his deputy have lent support to those potentially destabilising remarks. The latest person to offer support to the lady has been no mean person than a top communications staffer at the presidency.

Secondly, under the 1992 Constitution of the Republic, chiefs are not permitted to engage in open, partisan political activities. This injunction was obviously included in the Constitution for the purpose of maintaining the sanctity of that noble institution that was bequeathed to us by our forebears, many of whom laid down their lives for generations unborn. That immediately brings to mind the exploits of Nana Yaa Asantewaa, Nana Kwamena Ansa I, Nana Sir Otumfuo Agyeman Prempeh I, Nii Kwabnea Bonney, Nana Sir Ofori Ata I, among others.

Unfortunately, that very important clause in the Constitution was undermined almost immediately the Constitution was promulgated by the very first person who swore to the people of Ghana, to uphold and defend it, by appointing chiefs and other traditional rulers to clearly partisan political positions in government and elsewhere.

Over the past eighteen months or so, chiefs in certain parts of the country have promised to deliver anywhere between 80 and 100% votes to the President at various functions as the President of the Republic grins from ear to ear. In the latest of such divisive and, as my American friends would say, extremely dumb acts, one chief has actually presented a ram to the president as “a celebratory offering for his victory for the elections” that are still seven months away.

Come on Nananom, you can do better than that? This is the 21st century when Tim Peake is running marathons in space, for goodness sake!

In early 1974, a paramount chief of one of the paramountcies of Ghana suggested, during a visit by Acheampong that he should rule for twenty years. Within days, paramount and village chiefs around the country were falling over each other, to echo that sentiment. It did not take long before the students of the universities and the Professional Bodies Association of Ghana began to expose the rot in Acheampong’s government, and the rest the sages say, is history.

Fortunately, this latest clap trap does not seem to have excited any other chiefs, so far. Thankfully, my paramount chief has never said or done anything overtly political. In fact nothing political has ever come from his palace and the day it does, I shall wear another party’s colours, hat, shoes and all, and appear before him and see if he will have the nerve to drive me out of his palace!

Actually the crux of this write-up is about the President’s seeming condolence with the level that this very dangerous development in our national politics has assumed lately.

Apart from a criminal bus rebranding contract, Mrs Attivor as minister, supervised an entity that awarded contracts for the construction of some of the worst roads in the world. Naturally, any serious government that takes over from this moribund administration should, as matter of priority, determine why roads built at such enormous costs to the Ghanaian taxpayer deteriorate nearly as quickly as they are built.

Not surprisingly, people like Mrs Attivor who have skeletons in their cupboard should be very afraid of an honest administration taking over from what the poor Ghanaian taxpayer has been saddled with for nearly a decade. But is it not more honest to own up to wrong doing than to begin to involve a whole region and ethnic group?

Mr John Dramani Mahama swore in August 2013 to uphold the Constitution of Ghana and to protect every Ghanaian everywhere, no matter their place of birth or political or religious affiliation. The sort of nonsensical effusions that Mrs Attivor engaged in has the capacity to create major problems for the people of Ghana and the President of the Republic should know that.

By his stony silence, is the President telling the rest of us Ghanaians that he agrees with these ugly developments in our politics? Is he not actually confirming the suspicion of Ghanaians that all this while the leader of our nation has been part of the broad daylight robbery that members of his government and their friends have been perpetrating on the people of Ghana? Is that why the report that the late Prof Mills commissioned into the Embraer aircraft purchase in Brazil never saw the light of day?

Is that why the looters of GYEEDA and SADA were asked to refund the monies they stole rather than being prosecuted in the law courts? Could that be the reason why the Attorney-General has adopted a rather lackadaisical attitude towards prosecuting the pen robbers? Is that the reason why the company that did the stinky bus rebranding job has been let off so lightly?

Let me guess, according to Mrs Attivor’s theory, which has been supported by the high echelons of the President’s party and one of his top appointees, only the NPP has the interest of the people of Ghana at heart and will therefore prosecute those who ride rough shod on the people. By his silence, is the President not endorsing this theory? In that case, can he give just two good reasons why I or any other Ghanaian for that matter, should vote for him in November?

To start with, the President seems to endorse the divisive ethnocentric campaign that has obviously been sanctioned by his party. He it was that campaigned in the northern part of Ghana in 2012 with:

“Vote for me because I am one of you.” “If the NPP want to win the election, they should make Bawumia their presidential candidate”. “We are tired of playing second fiddle, vote for me to be president.”

That was candidate Mahama. Do I take it that this time around, as President Mahama he does not wish to carry on openly himself and is therefore using proxies, his in-laws and backbench MPs and discarded ministers? Very clever, but not too smart Mr President, because some of us have seen through it all and it will not wash.

From the clandestine importation of agents of terror into Ghana, through the wanton dissipation of our loans, to ethnocentric vituperations, unless the man comes out with some very cogent reasons, John Mahama does not deserve one more day in Jubilee House after December 31, 2016.

I rest my case, for now!