Is President Mahama Becoming A Dictator? 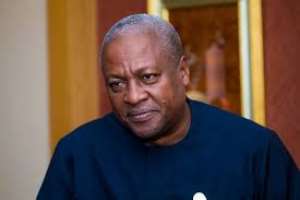 There is an Akan proverb which states that “Opanyin a watena fie ama nkwadaa awe nanka no yebu nanka wefuo a oka ho bi” – to wit: an adult who supervised the consumption of a puff adder (snake) by children is counted among those who eat puff adder. If an elected leader like President Mahama (Mahama) would gloss over incidents of barbarism with scorn, impunity and blatant display of raw power by persons he had appointed into positions of authority, it would mean he had either lost control of events under his watch or just like the chameleon, changed his color to become a dictator.

Under the supervision of the Chief Executive Officer (CEO) of the Accra Metropolitan Assembly (AMA) Oko Vanderpuye, soldiers and police personnel beat to pulp a poor boy who supposedly sought to capture the demolition of suspected illegal structures in Accra. The boy was left to die, but for some good Samaritans who rushed him to a nearby clinic and later to the 37 Military Hospital. Which part of the 1992 Constitution permitted Mahama’s employees to subject a fellow Ghanaian to such barbaric treatment?

Barely a week later, (Monday April 11, 2016), a 25-year-old commercial driver, Osei Manu, had to be taken to a hospital after enduring over an hour of brutish assault that left him with serious body injuries, swollen eye and chest pains in the hands of four city guards of the Kumasi Metropolitan Assembly (KMA) for allegedly stealing a car radio. Mob action had been frowned upon anytime it occurred. It becomes strange when it is ordered and carried out by the very people elected/appointed to maintain law and order.

On Thursday (4/21/2016) Ghana media carried another horrible incident involving two members of the military at Tamale who subjected a 16-year-old boy to torture by pointing guns at his head in a bid to get him to confess to stealing a Techno mobile phone. ”With legs not touching the ground, Corporal Samson Atuahene and his colleague beat the boy till he fell unconscious, and yet the soldiers would not show any mercy. Such act of disregard for fellow human being reminds Ghanaians of the rule of the military in the eighties. It was not very pretty.

There is also the case of three South African ex-cops, Major Chris Hazis (RTD), Warrant Officer Denver Dwayhe and Captain Mlungiseli Jokani, who were arrested for being in the country at the request of the New Patriotic Party (NPP) to train its security personnel in various security drills, including unarmed combat, weapon handling, VIP protection techniques and rapid response maneuvers. They were charged with conspiracy to commit crime and unlawful training but the state dropped the charge against them after detaining them for some days.

While the case was still in court the three were picked up by the Bureau of National Investigation (BNI) and deported on Tuesday, March 29, 2016. If Mahama chose to arrest them, why did he not prosecute them and allow the courts to determine their guilt/innocent? What happened to the term “due process”? The action of the Ghana Immigration Service to deport those foreigners is an abuse of power, gross disrespect to the courts of the land and the rule of law. Dictators endorse lawlessness by fragrantly disobeying the laws of the land. Mahama should be worried about the integrity of the nation to the outside world. Suspicion of political opponents should not be an excuse for violating the laws of the country; it should rather be a guiding principle to follow the law to the letter.

Following these is the behavior of one Alhaji Baba Kamara, believed to be the National Security Advisor (NSA), who behaving like the proverbial “Akuraase Taaman” (a bully, who on the suspicion that someone had touched his girlfriend would show the individual where “power lies”) unilaterally ordered the arrest of one Dr. Edmund Ayo Ani for: (a) taking pictures of vehicles re-branded at a facility belonging to him; and (b) circulating information on social media that he had diverted vehicles meant for the NCCE to the NDC.

A responsible NSA would seek legal action instead of the arbitral arrest he resorted to. “In an era of respect for the rule of law, an aggrieved person even if he is the NSA is required to sue if his rights had been infringed upon.” Baba Kamara misused his position (a benchmark of dictatorship) to settle personal problem and went scot free. If he did not have the backing of Mahama, he would not do that.

What is Mahama afraid of that he would not allow political opponents to speak to students in tertiary institutions in Ghana? Dr. Mahamudu Bawumia, the Vice Presidential Candidate of the opposition New Patriotic Party (NPP) was on Monday (3/15/16) denied access into the Dambai College of Education in the Volta Region. The students of the College made their own arrangements for the event to take place in an open park.

Dr. Bawumia was again prevented from speaking to students of the St. Francis College of Education at Hohoe in the Volta Region, until after a last minute intervention from the Catholic Church paved way for the address to be held. On Tuesday (4/5/16) the authorities of the University of Mines and Technology (UMAT) in Tarkwa in the Western Region, stopped him from holding a students’ forum on the school’s campus.

Former First Lady and leader of the National Democratic Party (NDP), Nana Konadu Agyemang Rawlings had a similar unfortunate incident at the University of Ghana campus on Friday (4/14/16) According to her the program dubbed ‘Time With Legon”, was organized by the University of Ghana SRC, the Commonwealth Hall JCR and the Graduate Students Association of Ghana, GRASAG.

This kind of disruption is unacceptable in a viable democratic dispensation. By the guidelines of the Ministry of Education and the Ghana Education Service (GES), political activities are allowed at the tertiary level, where students are believed to be matured enough to make informed choices.

Censorship and dictatorship are bedfellows. Mahama’s government had just introduced an obnoxious media censoring directive through the Information Services Department (ISD) that requires journalists working for foreign media to seek authorization before conducting any filming activity in the country. This directive clearly imposes direct censorship on the media and clearly contravenes provisions in Article 162(2) of Ghana's 1992 constitution, which states that: “Subject to this constitution and any other law not inconsistent with this constitution, there shall be no censorship in Ghana.”

The ISD's policy is also at variance with Clause 4 of the same Article of the Constitution, which provides that: “Editors and publishers of newspapers and other institutions of the mass media shall not be subject to control or interference by Government, nor shall they be penalized or harassed for their editorial opinions and views, or the content of their publications.”

Most worrying is the fact that when three journalists, Jorgen Ebbe Christensen, Troels Kingo, and Sandra Haugaard from Impact TV, a Denmark-based television station had complied with the directives, they were harassed by security operatives who forcefully seized their filming equipment after they had taken footages at Saaman, a mining community in the Eastern region, questioning why they had conducted filming within their mining concession.

According to The Media Foundation for West Africa (MFWA) which had condemned the attacks on the three Danish journalists (4/25/16) “it finds this development extremely worrying as it infringes on the rights of the journalists and limits the boundaries of media freedom in the country. The MFWA is equally worried about the implementation of the absurd policy by the ISD which seeks to impose direct censorship on journalists working for foreign media.”

Dictators are very calculating. They always initiate laws/decrees in lieu of an expected action for all to see that they worked within the confines of the law or constitution. Within one year after independence Prime Minister Nkrumah (Nkrumah) enacted the Deportation Act in December 1957 which gave him the authority to “deport undesirable aliens whose conduct was considered not to be of public good.”

Victims of this law were Bankole Timothy of a Sierra Leonean, the editor of the Daily Graphic; Alhaji Amadu Baba and Alhaji Amadu Lalamie, ethnic Hausas born and bred in Kumasi for “bank rolling the opposition parties” and The Right Reverend Richard Roseveare, the Anglican Archbishop of Accra who considered the shibboleth that “Nkrumah is a messiah” to be blasphemous.

In July 1958 the Preventive Detention Act (PDA) was enacted. The law conferred unfettered power on the Prime Minister to order the arrest and imprisonment of any citizen without trial. The law claimed as some of its victims the entire leadership of Ga-Adanbge Shifimo Kpee, Victor Owusu, Joe Appiah, William Ofori Atta and Joseph Kwame Kyeretwie Boakye Danquah. Nkrumah unilaterally dismissed Sir Arku Korsah as Chief Justice for failing to convict Tawia Adamafio, Ako Adjei, and Coffie Crabbe suspected to be involved in the Kulungugu bomb explosion on his life. Professor Kofi Abrefa Busia, Oheneba Kow Richardson, Ashie Nikoi and Amponsah Dadzie went into voluntary exile. Komla Agbeli Gbedemah, who was forced to resign his position as the Finance minister in 1961, is alleged to have fled Ghana as there were plans to place him under preventive detention. At the time of his overthrow in February 1966, Nkrumah’s political prisoners were more than one thousand.

Why another law when there are some such as the Anti-Money Laundering, Anti-Terrorism, Narcotic Drugs, Electronic Communications, Data Protection, Economic and Organized Crime Office, and Security and Intelligence Agencies Acts serve the same purpose?

Opposition to the bill has come from various people and institutions. According to Nana Akufo-Addo, presidential candidate of NPP,” it will give the state discretionary access to the private correspondence of individuals.” Lawyer Anyenini believes that there is no need for it as there is neither lacuna to fill nor mischief to cure. Kofi Bentil, Vice President of IMANI Africa opposed it because it undermines everybody’s freedoms and liberty; and will surely lead to abuse.

The United Nations Human Rights Council (UNHRC) on December 4, 2015 asked Ghana to “provide information about the legal safeguards in place against arbitrary interference with the privacy, home and correspondence of individuals, and their observance in practice.”

Ghanaians are nervously edgy when it comes to legislation that seems to target the opposition. Whatever was the intention of the law of “causing financial loss to the state”, its initial implementation turned out to affect mainly persons from the other side of the political divide. Messers Tsatsu Tsikata, Kwame Peprah, Victor Selormey, Don Abodakpui and Mallam Issah all from then minority parties in parliament went to jail under the law. Dzifa Attivor has even suggested that the implementation of the law had some tribal connotation since most of the people affected were of the Ewe tribe.

The passage of the bill would give legal backing to Mahama’s operatives who clandestinely use the term “Order From Above” to cover their nefarious activities. Any low-cost and low self-esteemed politician/manager/leader would cowardly pounce on it to inflict pain on his/her suspected enemy or enemies to show people where “power lies”. The PDA’s original intention was to silence political opponents but it became a tool for settling personal scores.

The decision to introduce the Spy Bill is blatantly wrong and operatically idiotic. It is liable to operational misuse and abuse. This is Ghana and the history is there for all to see. Dictatorship in progress? “So are they all, all dictators, sorry all honorable men”

Is President Mahama becoming a dictator?