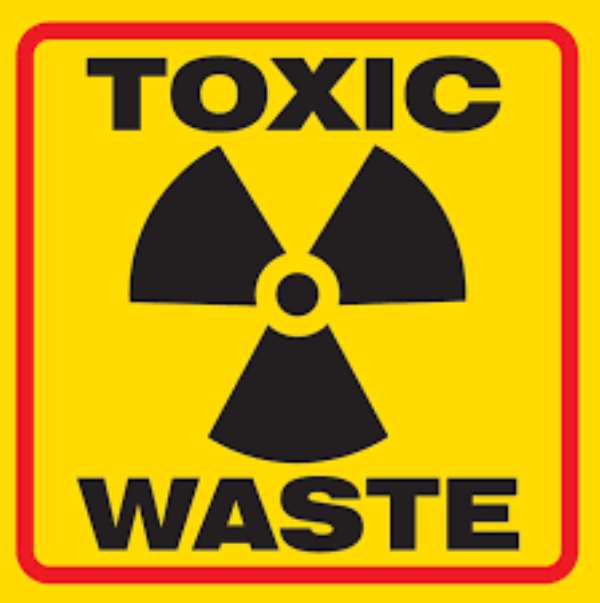 Not many years ago, ten 40-footer containers were offloaded from a ship which docked at Tema harbour. For two months nobody had claimed the containers. The name and address of the supposed owner were incorrect. The custom officers became suspicious and decided to open the containers.

They discovered to their utmost surprise and bewilderment that the ten containers were loaded with very dangerous toxic waste. Similar situations have occurred in other countries including Ivory Coast, Togo and Nigeria. It is believed that certain rich African businessmen are involved. They are paid huge sums of money by Western countries to dump high-tech toxic waste in Africa. How can our own countrymen be so wicked, inconsiderate and heartless!

Many African countries have suffered the horrendous effect of toxic waste dumps from the West. Ghana has become the latest place where high-tech toxic waste has been discovered. Two electronic waste sites or scrapyards in Ghana were selected by the researchers. Samples taken from these e-waste sites were analysed. The analysis showed that dangerous chemicals have been contaminated. At the scrapyards in Ghana, what are mostly dumped there are worn-out tyres, spoiled computer units and several electronic trash. Throughout the world there is a growing demand for more advanced and fashionable mobile phones, flat screen televisions, super-fast computers, digital cameras and many latest and improved electronic gadgets. This technological advancement has created a situation whereby obsolete electronics are massively shipped to poorer countries including Ghana. Instead of safely recycling them in the west, they are rather shipped to developing countries with the full awareness of their poisonous effects while the governments of these developing countries look on helplessly.

Sadly enough, and whether known or unknown to the poor and wretched Ghanaians, these obsolete electronics contain dangerous substances of toxic waste like lead, mercury and brominated flame retardants. Young boys at Agbogbloshie, (the major electronics scrap yard in Ghana), disregard the poisonous effect of e-waste and go ahead to burn tyres, electronic cables and other electronic components with the sole aim of melting out the plastic coverings and reclaiming copper wires. The amount of toxic chemicals released into the environment as a result of burning in small fires is huge. The effect and danger of the chemical waste and smoke spewed into the environment and into the atmosphere are massive and they are largely responsible for many cancerous diseases and ailments affecting the thyroid glands.

Ghana is one of those countries in Africa identified as allowing herself to be polluted from electronic waste at the scrap yards. Nigeria has also been identified as a dumping ground for obsolete electronics. A careful investigation and research was conducted into the illegal and shady electronic waste trade a group at the United Nations university. The result was shocking! Evidence of illegal exportation of e-waste to Ghana mostly from Europe and the USA, began more than 50 years ago. The Korle lagoon was a thriving fishery. Now the former wetland outside Accra is one of the places in Ghana where the Western countries dumped 250 million tonnes of electronic junks including obsolete computers, laptops, cell phones and fridges. What is frightening at the scrap yards is that many workers, mainly youth and children, dismantle old computers and old televisions with bare hands. The toxic in the metal include lead and phthalates, which are dangerous chemicals known to affect sexual reproduction. This was found in most of the samples tested.

Gird up your loins and read what the other samples revealed. One sample contained a high level of chlorinated dioxins, which have been affirmed to promote cancer. In another sample the researchers revealed that the highly toxic chemicals that are released can easily affect children's reproductive systems, while others can affect brain development and the nervous system.

How do all these electronic waste get to Ghana in the guise of second hand items? Interestingly, no country in the West allows e-waste in their system and exporting e-waste from Europe is illegal but they clothe them in the name of old electronics meant for re-use or in the name of second hand items. Importers from Ghana and other African countries buy these old and often broken computers and other electronic gadgets, load them in containers and dump them in Ghana with the view to making profits with little or no consideration for people's health. Labelling these electronic waste products falsely as second hand machines easily deceives many Ghanaian businessmen to import them to Ghana. The more these old and sometimes broken machines are dumped in Ghana, the more these Western countries are relieved of massive electronic garbage. Sadly enough, the majority of the obsolete electronics loaded in the container often end up at scrap yards in Ghana.

Discussions and meetings have taken place in Ghana about what should be done to ban or abate the importation of obsolete electronics, computers and mobile phones. Any decision taken as to what action to apply has never worked, for the simple reason that Ghana is incapable of producing high-tech electronics. What Ghanaians are refusing to understand is that all electronic goods including computers have their own expiry period within which they cease to function properly but as soon as these electronics, computers and mobile phones get old and functionally deficient in the West they find their way to Africa where, surprisingly, these old machines are given a new lease of life. Despite the attempts by importers to embellish the machines, for re-use, the fact cannot be denied that these machines still contain high levels of toxic chemicals which pollute the environment and create diseases for people when they are thrown away. There is, therefore, the need for African leaders to put extreme and uncompromising pressure on the giant electronic companies to phase out toxic chemicals and introduce global recycling schemes. The measures that have been suggested are extremely important and vital to tackle the growing problem of toxic e-waste.

It is quite sad and disheartening to learn that despite all efforts being made by some electronic companies to take full responsibility for the entire life cycle of their products once they leave their warehouses, Phillips and Sharp have refused to accept responsibility for recycling their obsolete products. Every Ghanaian will bear witness to the fact that the majority of old and dilapidated electronics are products from these two multi-national companies, Phillip and Sharp are giant producers of televisions and video players. The stance these two powerful multi-nationals have taken is killing the poor and unprotected workers in Ghana and many developing countries.

This business of scooping through the scrap yard at Agbobloshie for old computers has gone on for more than a decade. Young boys from the northern regions flock to Accra with the sole aim of burning old electronics to pluck small nuggets of Aluminium and copper. They admit it is a horrendous work but these young and poor boys are driven by need, unmindful of the hazardous effect on their health.

As far back in 2007 the United Nations initiated a program code-named "Solving the Problem of E-waste." The aim was to tackle the global electronic waste problem. They sounded a warning that if the electronic waste is not properly managed the e-waste will continue to grow by 31% within the next four years. When this happens, Ghana and the developing countries are going to be the worst victims.

For how long will this buying and selling continue at the Agbogbloshie scrap yard despite the health problems? Will the government of Ghana and the Public Health Service look on unconcerned when thousands of poor youth die from dangerous diseases as a result of burning obsolete electronics to retrieve metals to sell. Steps must be taking by concerned groups to educate the youth and the children to stay away from the scrap yard in order to avoid early cancer and other diseases.