MANASSEH’S FOLDER: Why Mahama can heal the “cripples” Pastor Chris could not heal

Our elders say the toad does not run in broad daylight unless something is after its life. In the same way, if you find Ghanaians filling the venue of an event earlier than the scheduled time, then you must be sure it is an issue of life and death. That was what happened last Friday when the Black Star Square in Accra started filling up about 12 hours to the start of the programme.

The Nigerian preacher and founder of the Believers' Loveworld Incorporated (also known as Christ Embassy), Pastor Chris Oyakhilome, was in town. He was in Ghana for his crusade dubbed “The Night of Bliss.” 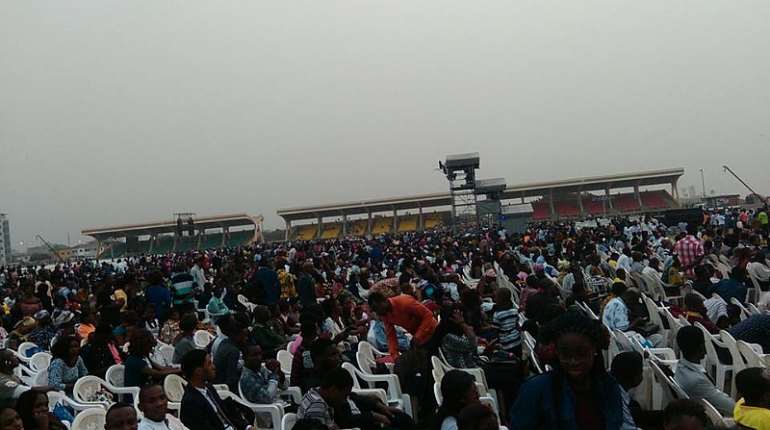 For many city dwellers, however, the day before that night was anything but blissful. Some major streets near the venue of the crusade were closed to traffic. The police said the closure of the streets was to help provide security for the tens of thousands who came from all over the country and some West African countries. They came to receive miracles.

Some came in wheel chairs, hoping to walk back home. Others came to have their sights restored. Apart from the few who came with physical disabilities or illnesses, majority of the people who went to the Black Star Square in search of miracles looked very healthy. And did all the miracle seekers receive their healing? The answer is, predictably, no.

There is no guarantee that everybody who goes to see a pastor will be healed. A few are often healed and displayed on TV. The rest find their way back home, only to wait and hope that another wonder-working Man of God will show up.

So I have a suggestion for those “cripples” who were not healed by Pastor Chris. They should head to the Flagstaff House. Sometimes we need the politician, not the pastor!. About 90% of those who did not receive their healing from Pastor Chris can get their miracles at the Flagstaff House. President John Dramani Mahama can heal them without having to fast or pray or do any spiritual gymnastics. They simply do not need any miracles. They need money. They need a decent source of livelihood. Majority of them need human solutions to their basic problems.

The truth about some of the tens of thousands of Christians who often run after miracles is that they do not need miracles. If you went to a hospital ward and gave all the patients on admission GHc2000 each, more than half of them would be discharged that same day. The “cripples” who wanted miracles from Pastor Chris were not only those with physical disability. They are not people who are mentally or spiritually crippled.

If anybody had gone to the Black Star Square on Friday and given each of the people there a $1000, about 90% of them would not wait to see Pastor Chris mount the podium. It is mostly a poverty problem. Here is an example: 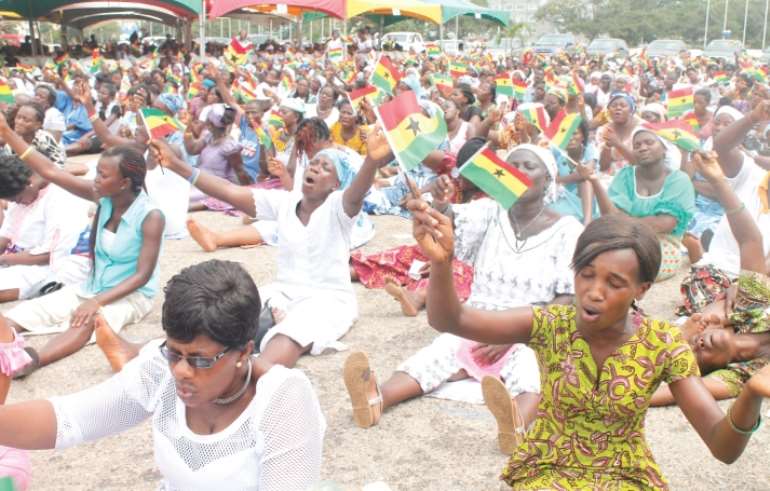 Ghanaians praying for the nation

Last year, a woman who could not see was brought to Joy FM. Her name is Afia Fugar. Last week, Afia Fugar was in the studio of Joy FM. This time, she could tell the exact colours of Lexis Bill's jacket, shirt, tie and everything he wore. Had this woman met a prophet or seen a miracle-working Man of God?

Then how is she now able to see?

Joy FM had helped to raise money to take her to South Africa for a surgery. Even though she is yet to undergo the final part of the surgical procedure she can see. It happened without the laying of hands and rolling on the ground.

Take, for instance, the story of this nine-year old Iraqi boy named Saleh. On October 18, 2003, seven months after U.S. forces invaded Iraq as part of Operation Iraqi Freedom, Saleh was returning from school with his 16-year-old brother Dia when he picked an unexploded bomb. Before his brother could take it from him and throw it away, the bomb exploded. Here is how the award-winning journalist with the San Francisco Chronicle, Meredith May, described the scene when the boys' father met them:

“Lying sprawled on his back, Saleh was motionless, his belly torn open. His right hand was gone, and only a thumb and an inch of his middle finger remained on his left. Blood poured from his eyes. A piece of shrapnel the size of a quarter had torn through his left eye and lodged in his brain behind his right eye.” 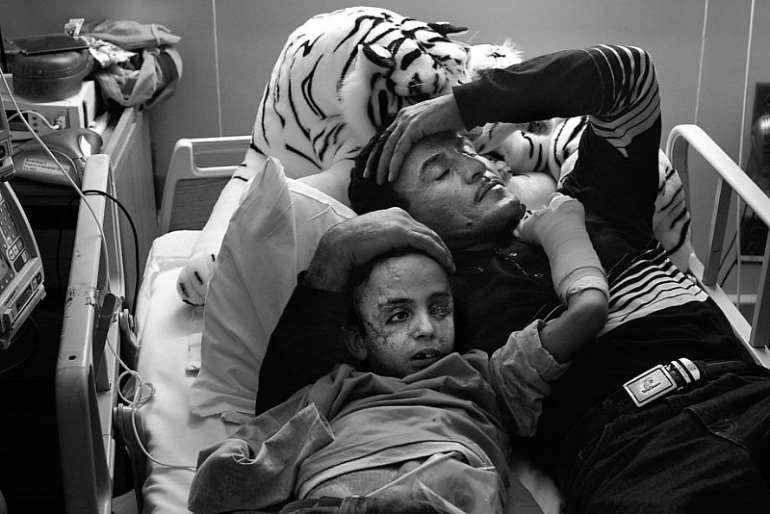 The boys' father, 35-year-old Raheem thought Saleh was dead so he ignored him. Saleh's elder brother was still speaking: “There's nothing wrong with me,” he told his father. His father took him and headed for the hospital. He could not survive.

“Just after Raheem had taken a dying Dia to the hospital, Hadia [their mother] had arrived at the blast scene to find Saleh on the ground. Realizing that her son was alive, she put Saleh's intestines back in his abdomen and held his body together with her skirt,” Merdith May reported in 2004.

At one point in the story, when the American military doctors met to consider the next surgery to conduct on the boy, they simply did not know what to do so they formed a circle around him and started to pray. The boy's refusal to die contradicted anything they had learnt or heard in their years medical practice. Saleh's situation can be described as a miracle. But he survived.

In June 2015, Saleh graduated from Oakland High School in the United States. 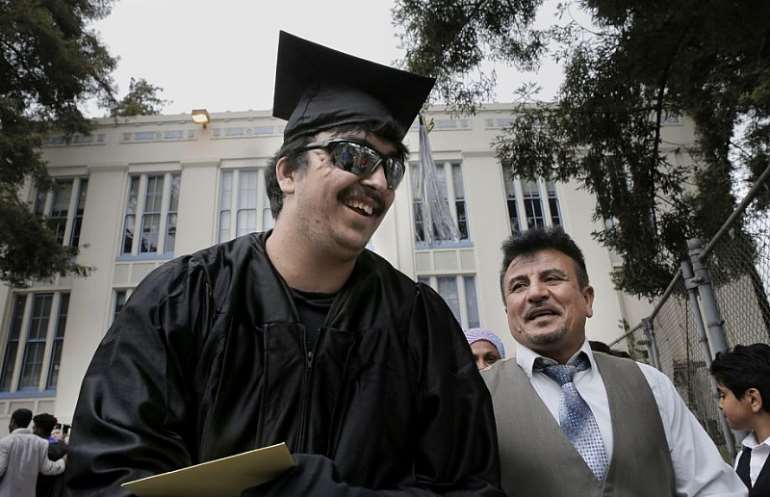 Unlike Saleh, 21-year-old Abigail Owusu Diko, was not lucky. The final year student of the Kwame Nkrumah University of Science and Technology had a tumour in the neck and appeared healthy when she walked to the Korle-Bu Teaching Hospital with her father. Doctors said she needed to undergo surgery or else she would die. The doctors had the capacity to undertake the surgery, but there were no facilities. There was no space at the recovery ward which had only four beds and one patient can be there up to six months. And there's only one such facility in Ghana.

Kweku Owusu Diko, Abigail's father, watched his daughter's situation deteriorate. She even picked infections at the hospital. And died while waiting for her turn to have the surgery.

The Korle-Bu Teaching Hospital is today closing three surgical clinics. Like Abigail, Rev. John Konde, who has a brain tumour and needs surgery, is waiting to die.

“I am deteriorating. I know my body, I can see that I am deteriorating,” he told Joy News' Kwetey Nartey. Only a miracle can save Rev. Konde. If you find him in church, it isn't because human beings cannot solve his problem. God has given wisdom to the surgeons in Korle-Bu to save people like Rev. Konde and Abigail. But because of greed, we have messed up our systems and we are dying.

Many of the problems we take to church do not merit the supernatural attention. Their solutions do not lie in miracles. God has given man the ability to solve some of our problems. That is why he did not put sand in our skulls. If God wanted to do everything for us, he would have probably filled our heads with pure water or cow dung. He would not have wasted so much time manufacturing that complex matter called brain.

Such desperations have created an industry of despots who exploit the gullibility and the vulnerability of the poor masses. The Bible calls them false prophets. But the President of Kenya, Ururu Kenyatta, calls them “thieves.” He has called for the regulation of churches. Back here in Ghana, anytime a nauseating video of Bishop Obinim or any of his likes pops up, people call on authorities to do something about the so-called men of God.

There are two ways to deal with this problem. Firstly, miracle-seeking Christians should know that not all our problems must be solved by God. Some problems need human solutions because God has empowered us to do that. Sometimes we only need to think. You don't pray to God for a husband or a wife without doing anything about your behaviour which is so repulsive that even God will find it difficult to stand you. Let's use our brains sometimes.

The second solution is to deal with the desperation that renders people powerless and sometimes thoughtless. Sometimes, it's the politician we need, not the pastor. We only resort to the latter when the former fails. If you find Rev. Konde, for instance, at a ridiculous prayer camp, the reason is not that he is stupid. He has no option.

My plea, therefore, to President Uhuru Kenyatta and other African leaders, including my own President Mahama, is simple: Africans have lost our sense of pride and dignity as a people. We are behaving like a drowning man, who will clutch on to anything, including a broken straw. Until you are able to stop the stealing of what belongs to us all we the people will continue to suffer. And your people – the African people – shall continue to be the laughing stock of the world.

And we shall continue to die miserably. We the ordinary people. Of the blessed but accursed continent called Africa.

The Writer, Manasseh Azure Awuni, is a senior broadcast journalist with Joy 99.7FM. His email address is [email protected] .