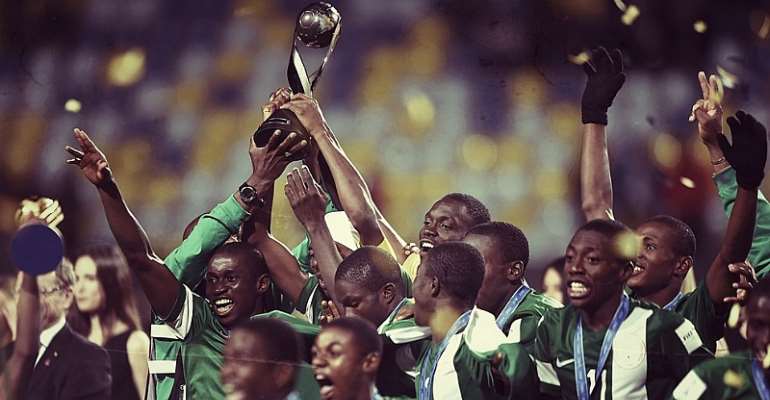 About a month ago our young lads won the FIFA 2015 Under 17 (U-17) championship in Chile. Those Nigerian teenagers displayed their football supremacy by conquering teams from the rest of the world. In their final match they defeated Mali their fellow West Africans by a score of two goals to nil.

It is worth stating that the U-17 (then Under 16) world championships began 30years ago in China and that the Golden Eaglets of Nigerian were also triumphant in the maiden edition of the competition. In winning the U-17 world cup championship for a record five times this year the Nigerian Golden Eaglets also became the second team to win in two consecutive U-17 competitions.

However, as Nigerians from the various nationalities, religions, and traditions celebrated the champions of the world, this writer could not help but to ponder some thoughts. As we rejoice and hail the exploits of the Chile 2015 top scorer Victor Osimhen, and the Nigerian captain and best player of the competition Kelechi Nwakali we need to assess how these young lads are going to affect the national team within the next 10-15years.

Are the nucleuses of the 2013 and 2015 Nigerian teams going to surpass what the former Nigerian U-17 champions have done? Would Kelechi Nwakali and Victor Osimhen exceed the feats of Philip Osundo and Mohammed Oladimeji of the Canada 1987 squad?

Interestingly, the aforementioned players are more infamous in the annals of Nigerian football history because unlike our other U-17 champions- Kanu Nwankwo, Ibrahim Babangida, Wilson Oruma, and Celestine Babayaro of the Japan 1993 fame, the Osundo and Oladimeji team were railroaded in their final game against the then Soviet Union team by FIFA officials.

One would suppose that then they did not want the Golden Eaglets to win the trophy back to back. The fate that soon befell both Osundo and Oladimeji should be what Nollywood stories are made of rather than the contemporary crappy movies that are just focused on sex and the most recent yellow pawpaw in town.

As Nigerians go through another government with President Buhari at the helm we need to use the Golden Eaglets as an analogy and/or metaphor of our national character. Then Dictator Buhari was head of state and leader of the supreme military council when our teenagers excelled at the first ever U-16 tournament in China.

But in the near future we need to know if Kelechi Nwakali and Victor Osimhen would be joined by the likes of Kelechi Iheanacho, Taiwo Awoniyi, and Chidiebere Nwakali who lifted the trophy at the U-17 United Arab Emirates 2013. Are these lads going to ever conquer the world again in soccer by capturing the FIFA Under-20 and senior World cup championships that have eluded Nigeria?

Sadly, going by our recent history within the last 30years, these kids that have made Africa proud by forcing an all African final match between Nigeria and Mali would be abandoned by their governments. The Nigerian and Malian footballing organization are going to hardly reward them for the prestige they brought to the continent. Instead these youngsters would be exploited at every turn and by this time next year they would be jaded and scattered all over the globe without any official/agency taking the time to have their contact information. These wide-eyed lads would come to realize the sadness that is Africa, the place where majority suffer in the midst of plenty and youth is decimated.

Thus we would rather underfund these footballers and subjugate them in an unorganized and unsupported league because the masterclass (thieves) among us are insatiable. Hardly, any of these kids would remain in the local leagues because as African people we tend to like the products of others better than ours. Whereas some of these young kids are going to be forced into foreign lands with bananas thrown at them, fans greeting them with monkey chants which would mess them up psychological, our greed masterclass on the other hand would be content to fly from Lagos or Abuja for the weekend to physically watch derbies in London.

Ironically, as these economic scavengers journey out of the continent their self-sponsored pastors, priest, and imams pray for them to safely come back. These travesties occur because of the moral, ethical, and religious decay on the African continent. One person or a few people are allowed to sign over billions into their accounts without checks and balances.

These persons then have mouthpieces such as bloggers, traditional rulers, ethnic supporters, and foreign allies. Members of the support network then form a collective that becomes vested in maintaining the status quo because of the benefits they derive from our normative corruption.

Hence, as majority of our U-17 young boys become soccer globetrotters with limited stability the corrupt masterclass continues to steal from Africa encouraged by their paid fans. This includes Washington DC based attorneys that now have record number of Nigerian billionaires (crooks) as their lobbying clients.

Some Nigerians in the west survive by acting as financial carriers for those that bleed the continent; some bloggers are proud to show off their ill-gotten wealth which they get through political propaganda. Nigerian hypocrites constitute membership of the fan clubs of these dangerous masterclass individuals and families that seek their interest to the detriment of the nation.

Consequently, in a few years our corrupt masterclass and their crews are going to blame our U-17 progenies for not having the patriotic interest of Nigeria, assailing our heroes while these phonies use our national resources to remain the top rated sugar daddies in Atlanta.

Our talented footballers should relish this moment with the understanding that neglected Nigerians were left to die needlessly at the hands of Boko Haram rebels. Some examples of our masterclasses are Olusegun Obasanjo, Dimeji Bankole, Diezani Alison-Madueke, Peter Odili, Rotimi Amaechi, Bola Tinubu, Bukola Saraki, Goodluck Jonathan, Ngozi Okonjo-Iweala, Sambo Dasuki, and Muhammadu Buhari who use religion, tribalism, and paramilitaries to sustain their rein in power and theft in the billions. But we remain the mumus that keep on falling for their abracadabra.