The Changing Role Of Women In African Drumming 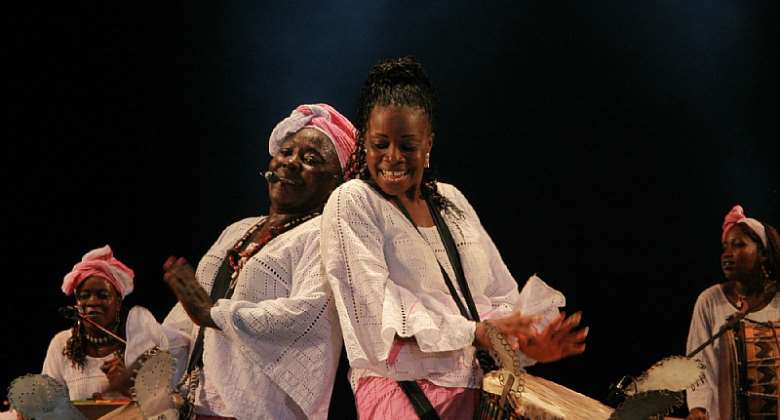 I lament over the death of Mamadou NDiaye Rose, who died on August 18th the birthday of my mother. Therefore it was a day of double melancholy for me. DouDou NDiaye Rose was Africa’s most highly esteemed drummer, colleague, and friend. I jot down these few thoughts on drumming in Africa and the role of women. Africa’s first theater director, Maurice S. Senghor, introduced me to DouDou NDiaye Rose in the seventies. He told him about the work I was doing in African music and that I could actually write music for African instruments on paper.

Maurice told DouDou that he actually played the music from the notes I had written on the paper. He stressed that my work would transfer African music from an oral tradition into a written tradition that would preserve it forever.

After a few years we were successful with a proposal to create a performing arts academy in Dakar that would concentrate on the teaching of traditional music/dance. This project had the full sponsorship of UNESCO and would have become a reality in 1993. But Senegal failed to meet some of the particulars of the proposal and the project was abandoned. Efforts were made, with a contingency of Senegalese in the New York area and a Senegalese representative to the United Nation, to put this project back on track. When the Senegalese representative was killed in an airplane crash in Africa, all contact with Senegal was severed.

One of the last comments DouDou NDiaye Rose gave to the newspapers was that he was disappointed that the presidents, past and present, of the country did not support his vision for a school devoted to the teaching of traditional music/dance.

Later, I concentrated my efforts on Ghana and went to the University of Ghana at Legon where I taught students, and performers how to write dance on the computer. This was to lay the foundation for Archives of traditional African music and dance.

When I first went to Africa the rule was women did not drum, with the exception of some of the wives of the Obas in Nigeria, and a group of Senufo women who drummed drums that were three feet in height, the drums usually attributed to men.

To say that women did not drum is actually a misnomer because women have always been involved in drumming, but not necessarily drums that stood three feet high, but their primary drumming instruments were composed of the utensils they used in the kitchen to prepare food, and work around the house. The common names for these instruments in Ghana are called “Kitchen” instruments.

They are usually made from various sized gourds used in cooking. The mortar and pestle are also used as drums when they pound foodstuff. Women also use metal basins and half of a calabash to wash clothes.

These instruments are over turned and the back is struck producing different rhythms. In some communities of Senegal and the Gambia there are women who specialize in the use of these instruments in ‘Water drum” ensembles, as well as those women who play inverted calabashes as drums.

There are groups of these female players of the calabash who live in Niodior, one of the Saloum islands of Senegal. For my research in Senegal, Mr. Senghor was my cultural informant.

I requested that he arrange for me to go and study directly with these women in Niodior, but because I, am not the best swimmer, and Niodior is an island, and it was rainy season, Mr. Senghor refused to send me to Niodior, instead he sent me to Sokone in southern Senegal. In Sokone there was another calabash instrument that the women played.

This calabash stood two feet tall and had a hole in the top. This hole acts as the sound hole. It was played with metal rings that were struck near the opening producing various sounds. This instrument was called “Togue” pronounced Tug. I added this instrument to my textbook and made symbols for it.

In Nigeria, there are other instruments that women play. These instruments are called “Pot Drums” and are used in church ceremonies to accompany singing. The pot drum I am most familiar with is the IBO pot drum called “UDU”. This pot drum is made of clay and is extremely fragile.

Recently westerners have been adding hardeners to this drum to prevent it from breaking. As African instruments are made to imitate the spoken language, I wonder if a hardener will affect the ability of the drum to speak.

In Ghana the Akan women play an elongated gourd with a long narrow neck and a bulbous end. The handle of the long neck is cut. This instrument is called ‘Adenkum.’ There is a hole in the bottom of the bulbous end. The Adenkum ensemble consists of five or six women who strike the gourds against different parts of the body such as the arm, thigh and palm. They use these instruments to accompany themselves in song. The Adenkum is played chiefly by women, but some ensembles are accompanied by a double bell, and a music box.

You can see from this brief accounting that women have always been involved in drumming, but not the usual drums attributed to men, but they have their own drums called Kitchen drums.

In 1970 and 1971 it was rare to see a woman in Africa drumming anything other than kitchen instruments. If my memory serves me faithfully, this began to change, as early as late 1971, and in 1972, there was a marked increase in women learning to drum.

At the Arts Council in Accra, Ghana, they were training women to play the Ewe drums. Slowly throughout Africa, women were gaining ground in the drumming scene. I cannot say definitely what prompted the change from women playing Kitchen drums to them playing drums attributed to men.

But, viewing the tremendous impact that the National Ballet of Senegal made in its premier performance in Brooklyn in 1971, I can safely say this had much to do with the increased interest in African music and dance. Also the women’s movement was gaining velocity at the time not only in the US but also in the world. Courses on Black and Minority studies were introduced into the curriculum of schools throughout the United States. It could also have been the association of national dance companies of Africa and their experiences with Black-American dancers in the United States who danced and drummed.

As for me I was always involved in African music and dance, so I was in the field years before the onslaught of the general public. There was a number of Africans who were teaching in various colleges throughout the States, particularly in California. They taught women as well as men. Some of these students went to Africa for additional studies.

There are some drums that are considered taboo, or sacred. One of these drums was the Djimbe drum. Men were apprehensive to teach women to drum this drum, but today there is an ensemble of female drummers, ‘Nimbaya’ based in Guinea who play the Djimbe drum.

Throughout my years in Africa, I have not seen women who play the tension drums. As far as I know this drum is still male dominated. The Yoruba people of Nigeria consider this drum sacred. I demonstrated how I wrote music for the talking drum to Duro Ladipo and he was overwhelmed with a feeling of reverence.

He said in all his days he had never seen written music for the ‘talking drum’ although several noted ethnomusicologists said they could write music for the talking drum. He marveled at my work and quickly asked a member of his group to play the music from the printed display. Duro Ladipo invited me to return to Nigeria and apply my system of notation to both the talking drum (Iya-Ilu dun-dun) and Bata drums.

In the seventies DouDou NDiaye Rose experimented with combining ballet of Bejart with Senegalese drumming. This group was known as Ballet Mudra. But it was the creation of Les Rosettes, a female drum ensemble composed of female members of DouDou’s family that captivated and celebrated women as drummers.

It was not the tradition to teach women to drum, but DouDou who had world exposure with the National Dance Company of Senegal as well as having performed with Josephine Baker decided to bypass tradition and create a female drumming group that focused on Sabar, the most popular type of drumming in Senegal.

He began with three of his daughters and added his granddaughters. In the 1980 Women’s rights were becoming a force in Senegal. This could have been prompted by the exposure that the women of the National Dance Company of Senegal had experienced around the world and in New York and shared with their families upon return.

Mr. Rose would spend hours a day teaching his daughters and granddaughters how to drum. He called the group Les Rosettes after his mother whose name was Coumba Rose. Today Les Rosettes represent the changing role of women in Senegal. They perform internationally. I applaud DouDou NDiaye Rose for the creation of Les Rosettes, and for emphasizing that women should not be denied opportunities based on ancient ideologies.

Don’t disrupt attention of drivers in vehicles
8 minutes ago

Let us not interfere in prosecution of rapists, child marria...
8 minutes ago