So What Exactly Is Paul Afoko’s Game Plan? 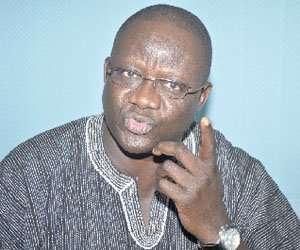 Some people who wish to be called “opinion leaders” in Ghana can be really irritating. One such person is the man who is supposed to be called the National Chairman of the New Patriotic Party or NPP, Mr Paul Afoko!

I hear this guy ran away from Ghana to live in comfort in exile in Britain during the heat of Jerry Rawlings’ bogus revolution? So this guy was away from Ghana, obviously living it off at the expense of the British taxpayer when others fought against the Rawlings’ chain, abduction and murders, the disappearances of hundreds of Ghanaians, the looting of national coffers and the Culture of Silence?

Did he hear about the Roman Catholic priest who was mistakenly murdered on the beaches of Dansoman because he looked like Bishop Palmer-Buckle? Did he hear about the late Professor Adu-Boahen escaping an ambush by the skin of his teeth the day he gave his famous lecture that broke “The Culture of Silence?” Has he tried to find out how the NPP was formed, how some Ghanaians at home and abroad sold family properties to get the party off the ground? Has he heard about the people who lost their livelihoods in 1992 for openly supporting the NPP?

Has this Paul Afoko man heard of Agenda 2000? Does he know the history of that scheme, how some people risked everything to make victory 2000 possible? If he hates the NPP so much, why did he bother to join the party or even stand for such a position in the party?

What exactly is his beef? Let me guess, he stood for and won the position of party chairman and did absolute damn all until his brother was implicated in the murder of a staunch party member that he and his General Secretary had allegedly had an altercation with. Then he decided that “attack is the best form of defence.” Instead of standing aside for obvious reasons, he decided to take the fight to the NPP?

In any decent jurisdiction, this man would have tendered in his resignation or at least asked to be excused from active participation in the affairs of the party the moment his brother was arrested, until the case was disposed of. Instead, he has decided to go down with nearly 50% of the people of Ghana? Who exactly does he think he is? Did he not learn anything about group responsibility or loyalty in all those years in the United Kingdom? If he does not abide by party discipline, how exactly does he wish to manage the organisation in which he holds such an important position?

As I write, there are party activists at the grassroots level who are going from house to house in various parts of the country, trying to sell the NPP message for Election 2016 to the people. However, because of the sheer stupidity of a few miscreants in the party hierarchy their efforts are hitting the rock at every turn. Each time some sense of calm seems to return to the party, this Afoko and his dumb supporters come up with something more sinister to thwart the effort of peace makers.

Here we are as a country saddled with the most incompetent government and president that Ghana has had since independence and all the most viable opposition party that the majority of the people have been hoping can rescue the nation can offer is internecine bunkum?

I have heard two reasons for all the nonsense that is going on in the NPP. The first, which is as daft as it is childish concerns an Agenda 2020, according to which some faction within the NPP wants the party to lose Election 2016, so it can win Election 2020?an there truly be a grouping that backward within the NPP in the twenty0-first century? Are those people serious? Remain in opposition for twelve long years, with no party member holding any responsible position in society for that long and hope to win important national elections? Are those people for real?

Imagine a football team that hopes to win a national league has two crucial, in fact, make or break matches to play before the end of the season. The first match is relatively easy and can be won with a good goal difference (which could be crucial in the end). However, a section of the players and management decides that the team should lose the first match and try everything in the book to win the last match in the hope that their closest rivals would lose one of their remaining matches. Can any group with heads screwed on the right way reason that way? How exactly will they hope to convince the people of Ghana about their seriousness as a party in 2020?

The second reason, according to my friend from Northern Ghana stems from what he calls the “Northern mind set.” According to my friend, most “Northerners” mow believe that John Mahama has done so poorly as president that the only way he can survive Election 2016 and in fact the only way another “Northerner” can ever win a national election in Ghana again is for the NPP to “throw” Election 2016, and what better way to do that than to use an important member of the NPP in that exercise? Throw the hammer into everything the NPP does between now and December 2016 and presto Mahama will be back in Jubilee House in January 2017!

I was tempted to dismiss this second reason outright, but the actions and inactions of this Afoko guy and his supporters over the past six months will tend to lend some credence to both reasons, ridiculous as they sound.

Isn’t there any clause in the NPP constitution that allows the party to call snap national elections to test the (un)popularity of its national officers? Why should a few individuals or group of nit wits be allowed to destroy an organisation in which so many people have invested so much over so long a period? The people of Ghana will never forgive the party if they allow the current group of do nothing plunderers to sneak back in by default in 2017.

I rest my case, for now.