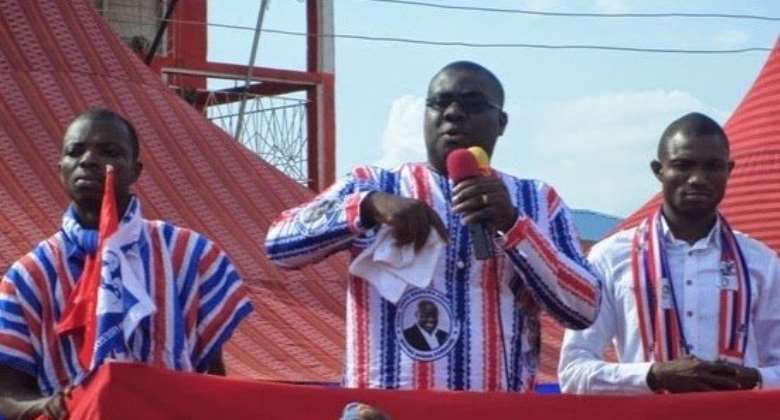 We found the hoodwinked, unacceptable and irresponsible call made by Sammy Awuku for a chaotic youthful revolution a flaw on the Peace and Security in the country. At a time the nation is heading towards the polls, Ghanaians don’t expect such a violent message from a whole National Youth leader of the largest opposition party.

We, the leadership of the Tertiary Educational Institutions Network (TEIN) of the National Democratic Congress, NDC in the Upper East Region without any reservation, call on all and sundry to support us condemn such uncalled-for utterance which shouldn’t have come from a National Youth leader.

Honestly, we doubt the mental stability of Sammy Awuku, so we are also calling on NPP apparatchiks to send him to Pantang Psychiatric Hospital for a simple litmus test on his mental position, better still, Sammy Awuku can meet us at Pantang junction for a quick help. It is very sad to hear such pandemonium pronouncement from a youth leader and that “we will not sit down for our future to be toyed with.

The cost of a new credible voters register is cheaper than the cost of violence. Guess it’s time for the youth to arise! We cannot afford to fail the masses in 2016. Youth Revolution imminent.” Do we need that in this era of democracy? Simply, no youth revolution is imminent.

Osagyefo Dr. Kwame Nkrumah, the first President of Ghana, once said “revolutions are brought about by men, by men who think as men of action and act as men of thought”. Our first President’s definition of “men of thought” in his renowned quote is totally different from NPP cronies such as Sammy Awuku. Men who think and act like men of thought will not declare violence instead of debating their argument through the constitutionally mandated forum. Sammy Awuku can’t simply embark on a revolution meant for men of thought. At least Ghana is noted for Peace and Security; we will not sit in Ghana to allow any irresponsible party leader to torment and disarray the future of the youth in the country.

What Ghanaians are looking for are lives changing and transformation agenda, peace, unity, security, robust economic indicators coupled with jobs for the youth, well and sound social interventions and huge infrastructural developments. NPP is well known for anti-development which is always against peace, unity and security in Ghana. It will be recalled that chairman Wuntumi declared “Arab Spring” and Ghanaians wisely rejected it.

Again, prior to 2012 election, Kennedy Agyapong declared that Ewes and Gas should be killed but Ghanaians thought over it before him. Nana Addo Dankwa Akufo-Addo, the ring leader of violence who double as the two times shamefully defeated presidential aspirant who wants to be President at all cost declared the controversial “all die be die” mantra which was also rejected by the good people of this country. Fellow Ghanaians, we must wake up again and help the Bole man, H E John Dramani Mahama to rescue Ghana from the hands of Sammy Awuku, Akufo Addo and their chaotic party.

Most importantly, the needed revolutions for this nation were done perfectly by the likes of Dr. Kwame Nkrumah and Flt Lt JJ Rawlings which moved Ghana to the road of development in education, health, road, water, social and political, economic jurisdictions. Why should we accept a visionless revolution which aims at serving a parochial interest? The argument is very simple, “we can’t make Akufo Addo president of Ghana simply because his father was a president”. It is not a royal stool to be inherited by descendant in a family.

In addition, the Youth employment Agency just got its Board of Directors which will soon recruit and employ over 100,000 youth across the country. LEAP beneficiaries have seen an increase in their entitlements. Government has distributed over 350,000 Liquefied Petroleum Gas (LPG) cylinders and stoves free of charge in Rural Districts. Students have received free school uniforms, books and sandals. 123 new Day SHS are in their various degrees of completion, meanwhile, some have been completed and commissioned.

The constitutionally mandated Free SHS has just started. Government has secured land at Somanya in the Eastern Region to establish the University for Environment and Sustainable Development. Massive infrastructure on the various campus of the University for Development Studies as part of plans to make each campus autonomous. MASLOC in recent times disbursed over GHC 65 million as loans to beneficiaries and more than 1000s of tricycles, taxi cabs and tractors were sold to youth across the country at affordable prices.

We in the NDC believe that government is about affecting lives and not licking the national purse. If with these numerous achievements in three years and Sammy Awuku still calls for youth revolution, then we expect him to meet us at Pantang Psychiatric Hospital for a holistic examination of his mental stability. We, therefore, call on Ghanaians to pay deaf ear to the unwarranted violence call made by the NPP National Youth Organizer in the true spirit of ensuring Peace, Unity and Security in the country.