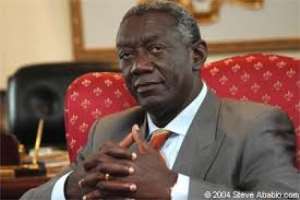 Greetings in the name of the Lord.

I have been forced to write this letter to you because of certain happening within the ‘’Osono’ fraternity. You may not remember me, but it really doesn’t matter. You remember Agenda 2000 though? It was the brainchild of two relatively insignificant young men who felt the urge to do something about Ghana’s democratic dictatorship and its dismal economic performance leading up the end of the millennium.

One of them is related to Auntie Adedlaide by marriage and the other attended the same Methodist Bible Class as the late Mr R R Amponsah. That is how they managed to get the original memorandum to Papa, as they called him. It was written longhand, for obvious reasons. Auntie may find it somewhere in Papa’s belongings because he treasured it!

It was early 1997, and it would take a few months for the “project” to take off. At the risk of their jobs and livelihood in the one case, they campaigned vigorously to get their friends and associates, some of them businessmen and women who depended on government contracts, involved. Many of them paid religiously into the account that was aimed at raising campaign funds at a time the NPP in opposition, was struggling to raise funds for the running of the party structures.

Many individuals eventually volunteered to fund their local and district polling station organisations. That was how pedal bicycles and motor bikes that had been donated for campaign but been stranded in Tema and Accra were transported to the rural areas particularly in the Central and Western Regions. Some paid for lanterns, kerosene, candles and log and minutes books, so their village and town polling station “committees” could function.

On the polling days of Election 2000 they contributed food items and “provisions” to provide three meals, feed the polling agents of the village and town polling stations, plus stipends at the end of polling. It had been reported that during the elections of 1992 and 1996 NDC party representatives at many polling stations in towns and villages across the Central and Western Regions, and some parts of the Eastern Region, had stuffed ballot boxes when the poor and “uncatered-for” NPP agents left the polling stations to find food. That was one of the major contributory factors to success of Election 2000.

The main actors did it because in the words of many, “Nemfo ye ahi.” Many did not do it for any political or financial rewards, but just because they did not like what was happening in the country. However, many of the young people in the villages and towns felt abandoned after the elections. Somehow, some of the original actors managed to convince their people to volunteer again for Election 2004. Unfortunately, they couldn’t continue to make empty promises in 2008 and 2012. The rest, the sages say, is history.

There are people up and down the country who have been hurt very badly by the state of affairs in the country at the moment – the state of healthcare, sanitation, education, the environment, which is being irreparably destroyed by Chinese and other foreign miners with impunity while traditional leaders, local and national officials seem content to pick the crumbs under the table and look the other way.

Many people actually blame you for their plight because they believe that you had the opportunity to bring lasting reforms to Ghana’s education, security, voting system and judiciary, among others, but you squandered them all.

Sir, the main import of this letter is that there are people in many parts of the country whose “eyes are red,” to borrow a local colloquial term. They want change but they believe there is no level ground for peaceful and orderly change next year. Apart from the recent discovery of large numbers of foreigners on our electoral roll, the voters’ register itself is too bloated and not fit for purpose. You knew this, the late Prof Mills knew it, the pathetic Afari-Djan knew it and so does Mahama today. Amazingly, none of you made any serious effort in the past to do anything about this anomaly.

Of course, Mahama does not have to do anything about it because it favours him. In a country where elections are sometimes won by less than 200,000 votes, why should the incumbent President worry about a voters’ register that contains over 300,000 more voters in the “Presidential” register than the “Parliamentary” one?

You have influence on the international scene. Please seek help from the international community to either clean up the current register, or better still, develop a new and more credible one. for Election 2016. My forebears coined the saying, “Efie dwe a na abotsen so dwe”, to wit, “There has to be peace at home before there can be peace outside.”

The other matter actually falls more directly in your turf. Some grassroots supporters are prepared to work on behalf of the NPP, but there are two very fat doctors who seem to be thwarting every effort that lovers of the Osono Fraternity and believers in the legacy of our forebears who started the independence struggle in Ghana.

Dr Nyaho Tamaklo, like the late Kofi Awoonor believes himself to be an Ewe first before everything else. Some of us can understand his right to support his nephew who through his ‘economic gymnastics’ is buttering his bread. We can even understand his right to be disenchanted with the NPP, but he has absolutely no right whatsoever to throw the hammers into the NPP works anytime peace seems to be returning to the party.

The other person is Dr Arthur Kennedy. He may have chased himself into the bush, but he has no right to drag the rest of the members of the NPP and their sympathisers with himself.

I believe that apart from being the most successful ever leader of the Great Osono Fraternity, you are also a member of the Council of Elders of the party? Please get your members to call those two to order. Their activities have become irritating, undemocratic and very idiotic!

Sir, I am not as old as you are, but I am old enough to have heard E. K. Nyame’s famous highlife song, “Nsu beto a mframa di kan….”

Yours in the service of Ghana and democracy,