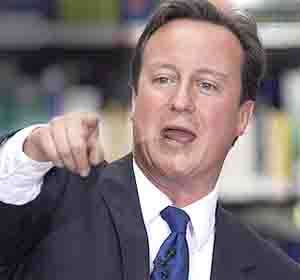 “The English are well known throughout the world for their lack of political scruples. They are experts at the art of hiding their misdeeds behind a facade of virtue. They have been at it for centuries, and it has become such a part of their nature that they hardly notice it any longer. They carry on with such a pious expression and deadly seriousness that they even convince themselves that they are the exemplars of political virtue. They do not admit their hypocrisy to themselves. It never happens that one Englishman says to another with a wink or a smile 'We don’t want to fool ourselves, do we now.' They do not only behave as if they were the model of piety and virtue — they really believe that they are. That is both amusing and dangerous.”

You might imagine that the above quote could be attributed to an activist from one of Britain's many former colonies, but in fact it is a quote from Adolph Hitler's Propaganda Minister, Joseph Goebbels. Who better to understand the English than their German cousins?

Progressive and revolutionary groups throughout the Caribbean are sending a clear message to British Prime Minister David Cameron regarding his arrogant, condescending and contemptuous statements with regard to slavery and the issue of reparations during his recent visit to Jamaica.

Cameron's behavior shows that the British Conservative Party's colonial mindset is still firmly in place. His reference to Britain’s role in “wiping slavery off the face of our planet” was yet another feeble attempt at an historical revisionism that attempts to trivialize, marginalize and denigrate the consistent African resistance to slavery, which finally led to its abolition. Reminiscent of a plantation master addressing his slaves, Cameron, whose own forefathers were slave owners, announced that Britain will not be paying reparations for their role in the Trans-Atlantic holocaust (Maafa), or even making a formal apology for British crimes against African humanity. This is a frontal assault on all Africans, and a slap in the face for the Caribbean Community (CARICOM) and the global movement for reparations. It is, as we say in the Caribbean, ‘eye pass’. But then, when we look around the Caribbean at our misleaders, with so few exceptions, we see why David Cameron felt he could get away with his outrageous behavior and comments. Despite his offensive remarks, Jamaican Prime Minister, Portia Simpson and her colleagues just could not resist fawning all over this steward of Empire.

The last thing we need is the likes of David Cameron coming to the Caribbean and telling the descendants of captured Africans how we must put our past behind us and look to the future. We are not children who need to be told what we should and should not do. David Cameron should focus on what he and his people should and should not do. I wonder if he would have told the Jewish people the same thing when they were demanding reparations from Germany? I don’t think so. And Germany has recently agreed to pay 1 billion dollars in reparations for the care of aging holocaust survivors. So why is it that when Africans ask for the same treatment it is not something that Mr Cameron can entertain? After all, although a holocaust is a holocaust and it is difficult to quantify the horrific impact of one over another, the TransAtlantic trade in captured Africans remains one of the most horrific events in human history – right up there with the genocide of indigenous peoples. So why is it that Mr Cameron has tried to unilaterally close down the negotiations for reparations. I use the word 'tried' because reparations is no longer an issue that can be taken off the table in such a manner – it is an international legal issue and is being fought as such.

Africans and their descendants have struggled for centuries with the painful impact of the trauma caused by slavery, racism in the form of white supremacy, colonialism and neo-colonialism. Our people continue to suffer to this day. We are not begging or even asking for reparations – we are demanding reparations, and our demand is a matter that must be addressed by the international community. By international community I do not mean that misnomer which refers to the USA, Canada, Britain, France and Germany, but rather the real international community, that includes all Africans worldwide, who after Asians, constitute the largest percentage of the world's population. According to the most recent UN statistics, by 2050, 1 in 4 people on planet earth will be African.

David Cameron told Jamaicans to “look to the future”, however the future David Cameron has in mind for us, is a grim one. It is a future where the Euro/American prison industrial complex is being expanded to Jamaica. Our erstwhile, colonial ‘masters’ are going to build a huge prison in Jamaica, at a cost of 25 million pounds, in order to ‘repatriate’ Jamaican prisoners. This way Britain will escape the increasingly high cost of incarcerating large numbers of Jamaicans, who currently constitute the third largest prison population in Britain. The British government is claiming that it has over 600 Jamaican prisoners that it wants to ‘send back’ to Jamaica to serve out their sentences but can’t, because the Jamaican prisons are overcrowded.

This is the future that we are being asked to embrace. A world where, especially Africans, are being imprisoned in terrifying numbers. Like the prisons in the US and Britain, where the large African prison population is being forced to work for little or no recompense, it will likely be the same in Britain’s prison on the island of Jamaica. This is a new form of slavery. For sure, the infamously racist British police will intensify their already intense efforts to 'lock up' Jamaicans, especially if it means they can now be ‘sent home’. This is a plan that Empire hopes to extend to other parts of the region as part of it's 'Fortress Europe' project.

Former president of Guyana, Forbes Burnham, used to laugh about the fact that Guyanese actually sang the verses of ‘Rule Britannia’, even when the lyrics were, Britons never, never, never will be slaves. And Guyanese were the slaves gleefully singing that anthem! It was absurd then and it is absurd now. With few exceptions, Caribbean leaders and governments are an embarrassment to their people - mere client regimes, made up of what Franz Fanon referred to as 'an aping bourgeoisie'. They are nothing but mimickers of all things European and it is time to stop this humiliating and degrading charade.

This month, progressive individuals and movements throughout the Caribbean will gather in Barbados to launch the English speaking Caribbean chapter of 'Network in Defense of Humanity', an anti-imperialist regional formation with international links.

The founding project of the Network will be devoted to the Guyana/Venezuela border issue, and the manner in which it is being used by imperialist and imperialist-friendly forces to subvert our region.

We must resist the continuing ploys by the US Government and its ruling establishment, to subvert and frustrate Caribbean and South American political and economic cooperation and integration. The deployment of a 'Made in the USA' geo-political strategy of 'divide and ruin' in our hemisphere must be exposed and opposed at a regional level.

The latest such ploy consists of the effort that is now underway to use a 200 year old border dispute between the Co-operative Republic of Guyana and the Bolivarian Republic of Venezuela to cause chaos and confusion in the region. This is most definitely part of a strategy to destabilize and subvert the outstanding efforts that have been made by Caribbean and South American nations to facilitate south to south cooperation, such as the Petro Caribe Energy Co-operation Agreement, the Community of Latin American and Caribbean States (CELAC), and the Bolivarian Alliance of Latin America and the Caribbean (ALBA-TCP).

Our people too often suffer from historical amnesia. At this crucial moment in our history, it is important to remember that when Forbes Burnham was the president of Guyana, and was a towering figure in the Non-Aligned Movement, supporting the struggle against Apartheid in Southern Africa, the same USA ratcheted up the border issue. This was long before Hugo Chavez and the Bolivarian revolution, and at that time the US sided not with Guyana but with the reactionary and racist Venezuelan governments – both the Christian Democrats and Social Democrats. They even went as far as selling Venezuela F15 fighters for use against Guyana. Guyanese should heed the words of Henry Kissinger when he said, “The US has no permanent friends and no permanent enemies – only permanent interests”.

We must be able to recognize and counteract the USA’s 'divide and ruin' strategies in our region, and we must resolutely oppose Caribbean governments that are opening the doors to those who seek to take us further down the road to re-colonization and new forms of slavery. No matter that some of our people may fall for the deception and lies that David Cameron and others like him perpetuate, no matter how many accept the ‘mark of the beast’, there are many amongst us who will continue the resistance in the name and spirit of our ancestors.

Gerald A. Perreira is a founding member of the Guyanese organizations Black Consciousness Movement Guyana (BCMG) and Organization for the Victory of the People (OVP). He lived in Libya for many years, served in the Green March, an international battalion for the defense of the Al-Fateh revolution and was an executive member of the World Mathaba based in Tripoli, Libya.