RE: Hajj Stampede: Where was Allah? 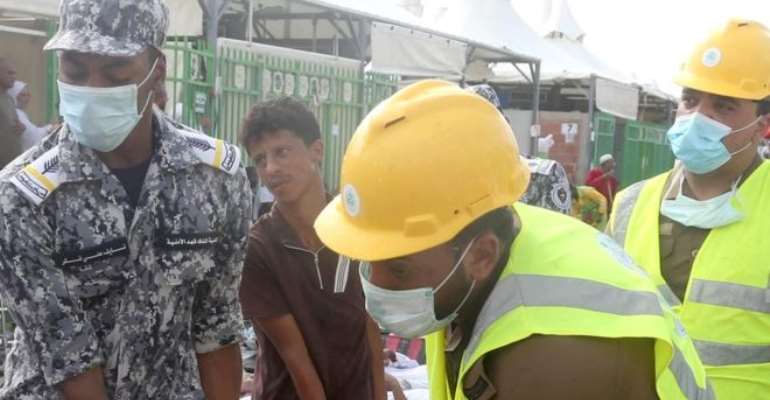 Following the tragic reports of the Mecca Crane crash and stampede in which several pilgrims returned to their Lord, I have read varrying views expressed on various platforms. The recent one is an article authored by one Leo Igwe and published on September 28, 2015 by www.modernghana.com . In his article, Hajj Stampede: Where was Allah?, he drew a flimsy conclusion from the occurrence of the Hajj stampede and said it meant Allah does not exist and thus Islam is not a true religion (I seek Allah's refuge).

In reality, his statements just like that of several others does not require a response because of the obvious weakness in his argument that should be apparent to every truth seeking reader. However, for the fact that his piece was spread wide and also shared by some people, I have decided to briefly respond to the falsehood he and his likes have spread.

Before I proceed, he repeated a false report that was spread by some media outlets about a Saudi Prince who allegedly blamed the stampede on some African Pilgrims. He, and likewise those who spread this false report sought to play on the sensitivity of Africans and cause disaffection towards the Saudi authorities. This report is a false report without any evidence. Indeed, the spokesperson for the Makkah governorate released a statement dismissing such false reports published in the international media. All the media outlets that published the false report never provided a source nor evidence to back their publication. And just as expected, it spread like wild fire. They have, however, failed to publish the refutation of the false report by the Saudi authorities. This shows their real intent in sowing seeds of discord in the Muslim society and they have failed already because truth is only one.

After reading his article, it became very clear to me from his argument that he is not a Christian for indeed no Christian will make these allegations based on his supposed intellect after believing that God watched his ''only begotten son's blood to be spilled on the cross just to cleanse the original sin of mankind" when God could have just forgiven mankind because of His mercy. Thus, I looked up his name on the internet and realized he is one of the staunch proponents of the 'Humanist ideology'.

It is surprising he attempts to justify his argument and flimsy analogy based on his limited and weak intellect. The failure of the 'Humanist ideology' and other atheistic ideologies to consistently perceive and explain the existence of mankind and the universe since the begining of life is evident. They try to use their limited and feeble intellect to explain the reality of life and offer solutions. His attempt to make such conclusions revealed his disingenuity. The human intellect is limited and cannot fully comprehend certain issues. Example, how man years after the existence of mankind has the human intellect been able to discover 'water on the planet Mass'?. And this trend continues and only explains how feeble and limited the human mind and intellect.

From the afore-mentioned, It is obvious he and those who share his ideology have an old standing issue with Islam and other religions and thus always look for reasons to make baseless speech and propaganda. They created an ideology before looking for evidence to support their ideology. How pathetic.

The Islamic creed is clear on such happenings. This incident and others cannot shake the fundamental belief of a Muslim. Indeed, it is one of our fundamental articles of faith to belive in divine destiny and the will of Allah on our lives. Likewise, we believe in taking up responsibilities to the best of our ability and hoping for Allah's will. Thus, this incident provides the authorities the chance to look at the arrangements and processes involved in organizing the Hajj in subsequent years.

The authorities have indicated they will act swiftly after the investigations and instill punitive measures if any official or agency is found to have been negligent.

A flimsy attempt to use this incident to drag the name of Allah (Glory be unto His name) into disrepute is an effort in futility. This kind of analysis and speech only comes from someone with a sick heart and weak insight.

I advice him and those who have been affected by this sort of thinking to rise above this cheap and poor reasoning. This is not the first time accidents have occured during the course of religious rituals and it is not only peculiar to Islam.

If he were honest, he would stick to the scientific and apparent cause of the stampede since that is what his ideology expouses. Rather, he tries to draw a flimsy conclusion using analogy based on the unseen matters of believe. This shows the untruthful nature of he and his cohorts.