.....Destabilization Of Africa, The Middle East And Asia Prompts Millions To Flee
By Abayomi Azikiwe 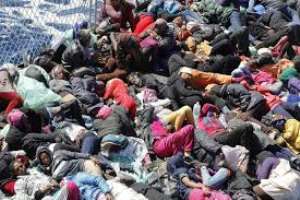 There was yet another gruesome discovery of over 70 dead migrants in Austria on a highway between Budapest and Vienna where thousands are seeking refuge. These deaths compounded approximately 100 others who died after their vessel capsized in route to Europe.

Inside the truck in Austria people had apparently suffocated while being illegally transported from the Mediterranean into Southern and Eastern Europe.

Austrian governmental officials announced on August 28 that 71 refugees, including an infant girl, were found dead in what appeared to be an abandoned freezer truck. During the same day Libyan naval units recovered the bodies of 105 migrants who were washed ashore apparently after an overcrowded boat capsized in the Mediterranean Sea on its way to Europe.

These deaths are occurring due an upsurge in migrants running away from war and poverty that has been initiated by United States and European Union foreign policies. United Nations officials and other international agencies concerned with migration have reported since last year that the number of internally displaced persons and refugees are higher today than any period since the conclusion of World War II.

The International Organization for Migration has revealed that over 330,000 people have crossed the Mediterranean so far this year. Consequently, the number deaths are ranging in the thousands and there no reasons to believe that more of these tragedies will not occur in the short term.

These recent mass deaths are by no means isolated incidents. A pattern of dislocation has been rising steadily since the wars of regime change in Afghanistan, Iraq, Somalia, Syria, Libya and Nigeria from 2001 until the present.

Also the growing class divisions and economic difficulties in other Asian and African states are creating tensions which foster migration. Some of the states which are impacted by this global crisis include Morocco in North Africa, Nigeria in West Africa and Bangladesh in South Asia.

When the U.S. and its NATO allies went to war against the Taliban government in Afghanistan they claimed that it was designed to end “terrorism” and ensure stability in Central Asia.

However, some fourteen years later hundreds of thousands of people have lost their lives in both Afghanistan and Pakistan with many more leaving the country as a result of the ongoing fighting between forces in support and in opposition to the Washington-imposed regime in Kabul.

Going back over 35 years, the U.S. waged a war against the socialist-oriented government in Afghanistan that was supported by the-then Soviet Union. Washington funded, trained and coordinated Islamic fighters which led to the formation of al-Qaeda and the eventual ascendancy of the Taliban between the late 1970s up until the 1990s.

In Iraq beginning with the military build-up and invasion during 2002-2003, some estimates claim that over one million people have died. War still rages between the Islamic State of Iraq and Syria (ISIS) and the Iraqi government in Baghdad causing a new wave of outmigration.

Both Syria and Libya were targeted for regime-change in 2011 through the support of pro-western groups, militias and massive bombing campaigns. Over four million Syrians have left the country many of whom are now seeking refuge in Europe.

The situation in the Horn of Africa is largely the result of successive U.S. administrations meddling in the affairs of the region. Somalia has been a major source for Pentagon and Central Intelligence Agency (CIA) interventions since the late 1970s when the administration of Jimmy Carter won over the regime of Mohamed Siad Barre and encouraged it to invade Ethiopia which was undergoing a socialist revolution supported by the Soviet Union and Cuba.

Coinciding with the weakening of the USSR, the regime of Mikhail Gorbachev halted support for the Ethiopian government of Mengistu Haile Miriam. After the overthrow of the Workers Party state in Addis Ababa in 1991, the U.S. the following year invaded and occupied Somalia under the guise of a humanitarian mission.

Somalians rose up against the occupation in 1993 prompting a withdrawal by the Pentagon and the United Nations peacekeeping forces. Nonetheless, Washington would continue to seek domination of Somalia through an invasion by the current western-oriented regime in Ethiopia in 2006 and the formation of a regional African Union Mission to Somalia (AMISOM) 22,000-member military force now operating inside the country.

All of these geo-political regions have their nationals being lured by human traffickers across borders in Asia, the Middle East and Africa with the promise of prosperity in Europe. However, Europe itself has serious economic crisis particularly in southern states such as Greece.

These deaths of migrants totaling nearly 3,000 this year, poses a problem for the EU due to the financial instability inside the imperialist states. Many migrants have entered Greece where the most serious economic downturn has taken place leaving millions in poverty and uncertainty stemming from the U.S. as well as Northern and Western European capitalist states’ terms of loan repayments and imposed economic conditionalities.

Italy has experienced a large wave of migration in recent months. The International Organization for Migration (IOM) says that over 65 percent of the people seeking entry into Europe this year have crossed over into Greece and Italy. (Reuters, August 28)

The International Business Times reported on August 30 that recent migrants are being trafficked heavily through the Balkans.

An article from this publication says “Investigations will likely focus on the Balkans region, which has now reportedly become the primary route for people-smuggling gangs transporting migrants and refugees from the Middle East, Africa and Central Asia into Western Europe. Between January and July this year, 102,342 people crossed into Austria via the western Balkans, more than 10,000 higher than the total which entered Europe via the so-called ‘Central Mediterranean’ route, according to data from Frontex, the EU border control agency.”

In a recent Washington Post analysis of the crisis written by Anthony Failoa and Michael Birnbaum, they acknowledge the criticism of the EU system for its failure to develop a sound and rational immigration policy. Earlier in June, the regional organization sought to handle the burgeoning migration into Europe through military means by halting, boarding and returning vessels where migrants were being transported.

The Washington Post authors say “Perhaps nowhere is that more true than in Hungary, the nation the perished migrants were smuggled through. This former Soviet bloc country, now led by right-wing nationalists, is fast emerging as the toughest obstacle for a record number of refugees trying to reach Europe from war-torn Syria, Iraq and other nations.” (August 31)

This same report continues noting that “Hungary is building a 109-mile-long razor-wire fence on its southern border meant to keep out migrants. But as they come ashore in Greece, then try to reach the wealthy core of Europe – nations such as Germany, Sweden and Austria – the asylum-seekers’ path to sanctuary runs straight through Hungary.”

Although Germany is portraying a more humane posture related to the latest migrant crisis they are not burdened with the same problems as the lesser developed states on the continent. The EU states have failed to agree on a uniform policy of quotas and methods of processing migrants.

“The problem is that the European system is dysfunctional, and when a system is dysfunctional, refugees are going to put themselves in danger,” according to Babar Baloch, the spokesman for UN High Commission for Refugees in Budapest. “Especially in Hungary, they are being pushed to take risks because they have no other legal way.” (Washington Post, August 31)

No one is above the law except the President - Oliver Barker...
44 minutes ago