Torture And Show Trials Are Common In Neo-Colonial Libya 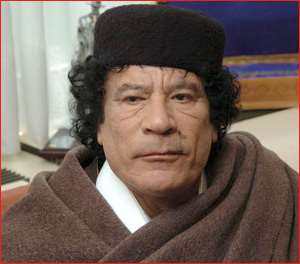 A video released last week showing the beating and torture of Saadi Gaddafi is not an anomaly in contemporary Libya where the Pentagon and NATO waged a war of regime-change in 2011.

Saadi Gaddafi was shown tied up and being struck across the face and head. Sounds of other inmates being tortured could be heard by him during the violent interrogation process.

Later this former football player in Europe had his feet placed in a metal grip where he was struck repeatedly on his souls. Saadi Gaddafi was blindfolded during the process of torture conducted by several men wearing uniforms.

This stark illustration of life under the neo-colonial rebels in Libya is a direct result of the war of regime-change initiated four years ago in the eastern city of Benghazi.

The situation in Libya is aggravated by the lack of any consistent legal, judicial or political system. Various militias which were armed and funded by the United States and NATO still patrol the cities, towns and villages across the country harassing, robbing, accosting and murdering civilians.

Also due to the social and economic impact of the war against Libya, the country is totally incapable of addressing the burgeoning migration crisis in North Africa. Thousands of African, Middle Eastern and Asians migrants have died this year off the coast of North Africa in the Mediterranean.

Human traffickers lure and load migrants onto rickety vessels in an often tragic quest for asylum in Europe. Obviously the currently divided regimes and militias based in Libya lack the capacity to halt this practice or are profiting from this human tragedy.

A State of Lawlessness and Deprivation
In addition to the documentation of torture, several high-level officials of the ousted Jamahiriya government under Muammar Gaddafi were sentenced to death, including Seif al-Islam, by a court system that has no creditably in regard to due process.

A highly questionable Libyan court on July 28 sentenced Muammar Gaddafi's heir apparent and son, Saif al-Islam, and eight others to death over alleged war crimes including the killings of protesters during the 2011 counter-revolution that was funded and coordinated by the imperialist countries and their allies.

These former officials of the Jamahiriya system under Gaddafi were sentenced to execution by firing squad. Some of these previous leaders include former intelligence director Abdullah al-Senussi and ex-prime minister Baghdadi al-Mahmoudi.

Legal proceedings in their cases were not subject to transparency so there is no indication what real evidence was presented against the defendants. Thousands of former government officials and supporters have been locked in camps and prisons for the last four years.

The current regime that is ostensibly in control of the capital of Tripoli is backed up by the Libya Dawn militia which emanates from Misrata, where some of the most violent and racist rebels were based during the 2011 war. Another regime which is recognized by the imperialist states is headquarters at a hotel in the eastern city of Tobruk.

Although Seif al-Islam was sentenced to death by a court in Tripoli, he was not present during the hearing that condemned him. This prisoner is being held by another militia in Zintan.

Even the Human Rights Watch (HRW) organization based in New York City, which said virtually nothing during the imperialist war against Libya in 2011, when nearly 10,000 bombs were dropped on the country, and militias carried out indiscriminate attacks against officials and civilians, resulting in 50,000-100,000 deaths, has spoken out against the show trials, convictions and sentencings.

Joe Stork, Deputy Director for North Africa and the Middle East of HRW said in a statement on July 28 that "There are serious questions about whether judges and prosecutors can be truly independent where utter lawlessness prevails and certain groups are unashamedly shielded from justice. This trial was held in the midst of an armed conflict and a country divided by war where impunity has become the norm.”

The Hague-based International Criminal Court (ICC) had filed charges against Muammar Gaddafi, Saif al-Islam and Abdullah al-Senussi during the war waged by the Libyan people to defend their country against the imperialist onslaught. Later the ICC in 2013 granted the Libyan rebels the right prosecute the former governmental officials despite their utter failure to demonstrate the capacity to conduct such a highly-politicized trial.

Libya, which was once the most prosperous state in Africa, has fallen into economic decline since the war of 2011. The enormous oil reserves inside the country are now a source of conflict among the various militia groups.

Unemployment and poverty are widespread while women, migrants and people of various Muslim and Christian communities face beatings, bombings and murder. Neighboring states such as Tunisia and Egypt have closed border crossings and are engaged in military efforts against the rising presence of the Islamic State and other rebel organizations.

Pro-Gaddafi Demonstrations Held in Benghazi
Meanwhile a pro-Gaddafi demonstration was held on August 4 in Benghazi, the birthplace of the counter-revolution of 2011. This protest was broken up immediately through gunfire scattering the crowd.

According to a recent article published by the Guardian, such is the despair with the counter-revolution, “in the past few days small numbers of Libyans have demonstrated in several cities, including Benghazi, holding up pictures of Saif and chanting: ‘Zintan, Zintan, free Saif al-Islam.’”

Due to the repressive atmosphere inside the country this is a rare occurrence indeed.

Supporters of the former government have been banned from involvement in political activity in Libya. Efforts to rehabilitate the image of the rebel regimes in the country have failed and even officials of the same imperialist states that overthrew Gaddafi have been forced to acknowledge the chaos prevailing since 2011.

U.S. Ambassador Christopher Stevens and several Central Intelligence Agency (CIA) operatives were killed in an attack on a compound in Benghazi during September 2012. The-then Secretary of State Hillary Clinton, who played a pivotal role in the war against Libya has never been seriously questioned about her role in the overthrow and assassination of Gaddafi although she is currently running for the Democratic Party nomination for the presidency of the U.S. In addition, there are questions lingering over the attacks on the U.S. compound in September 2012 and what Clinton actually knew about the incident.

More Negotiations Planned to End Chaos
The United Nations is convening a new round of talks attempting to stabilize the chaotic situation by bringing together the divided rebel groups that were empowered by the U.S. and NATO.

These talks, the latest in a series of failed efforts, were scheduled to begin on August 10. Nonetheless difficulties arose even before the negotiations could begin.

The Latin American Herald Tribune reported “The United Nations confirmed on Monday (August 10) that negotiations between rival Libyan political factions, which were scheduled to start in Geneva on Monday, have been postponed until Tuesday, according to a U.N. spokesperson in Geneva. In a related development, the U.N. special representative and head of the United Nations Support Mission in Libya, Bernardino Leon, has not yet arrived in Geneva.”

This same article goes on saying “Neither of the Libyan political delegations, each from its own autonomous government, has arrived in Geneva, while it is unclear if they are still willing to participate in peace talks.The new round of negotiations was announced last week following a series of consultations conducted by Leon with representatives of the main Libyan factions, while around 30 delegates were expected to participate.”

There can be no resolution to the Libyan quagmire until the people are united under a political program designed to place the country back on a trajectory of national sovereignty and anti-imperialism. The western imperialist states which destroyed Libya cannot put the country back together. This enormous task can only be carried out by the people of Libya themselves in solidarity and unity with other progressive forces throughout the region.